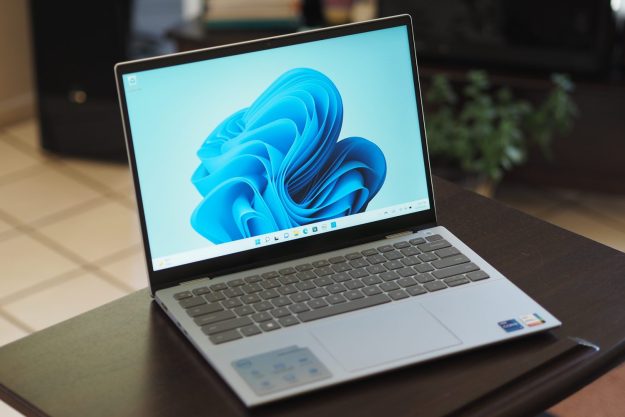 “The Dell Inspiron 2-in-1 would be a solid option were it not for the mediocre display and battery life.”

I’ve reviewed more 14-inch laptops over the last several months than any other size, demonstrating how popular these devices have become.

The Dell Inspiron 14 2-in-1 has been one of the more popular 2-in-1 options, especially if you’re hoping to save a few hundred bucks compared to the most premium laptops. And Dell has updated the machine for 2022 with a slightly more streamlined aesthetic and an upgrade to Intel’s 12th-gen CPUs.

The high-end model I reviewed came in at $1,050, though a cheaper $850 base configuration is also available. Unfortunately, regardless of how you configure it, the low-quality display and mediocre battery life make this 2-in-1 hard to recommend.

The Inspiron 14 2-in-1 received a design refresh for the latest version, with sharply angled rear edges replacing rounded surfaces and horizontal rear vents taking the place of round holes. The silver color scheme of my review unit contributes to a more streamlined look than before, –a definite improvement. Overall, the Inspiron now looks more like the XPS line, which is good.

The $735 Lenovo Flex 5i 14 is more understated in its design, while the $650 Asus VivoBook Flip 14 has a black chassis that’s attractive without being garish. Those laptops are slightly less expensive than the Inspiron 14 2-in-1, and if you jump up in price, you can buy one of those most stunning 14-inch 2-in-1s available today, the Lenovo Yoga 9i Gen 7.

It’s an adequate build for the price, and it’s more robust than the Asus Vivobook Flip 14 while being equal to the Lenovo IdeaPad Flex 5i 14. The Asus Vivobook S 14X, priced around the same as the Inspiron, is built as solidly as well. You’ll need to increase the price if you want the most robust build quality.

The display bezels aren’t the smallest around, particularly on the top and bottom, making the Inspiron 14 2-in-1 with its 16:10 display a bit deeper than some of the competition. It’s 0.62increase to 0.70 inches thick and weighs 3.61 pounds with the larger 54 watt-hour battery, which is a decrease in thickness but an increase in weight.

Connectivity is a mixed bag. You get two USB-C 3.2 Gen 2 ports, but no Thunderbolt 4 support — which is disappointing — along with a USB-A 3.2 Gen 1 port, a full-size HDMI 1.4 port, a 3.5mm audio jack, and a full-size SD card reader. The SD card reader is an excellent addition to what is otherwise a standard array.

Wi-Fi 6E and Bluetooth 5.2 are options, meaning you can gain access to the most up-to-date wireless connectivity.

The Inspiron 14 2-in-1 7420 is the first laptop we’ve reviewed with the Intel 12th-gen Core i7-1255U. It’s a 15-watt, 10-core (two Performance and eight Efficient), 12-thread CPU that’s a midrange lower-power option for thin-and-light laptops. We’ve tested several machines with the 28-watt, 12-core (four Performance and eight Efficient), 16-thread Core i7-1260P, and then Intel also has the even lower-power Core i7-1250U, with the same core and thread count as the Core i7-1255U, but running at 9 watts. We haven’t tested that CPU or any other variations with slightly faster frequencies or more cores.

The bottom line is that the Core i7-1255U is intended to provide slower performance than the Core i7-1260P while offering better efficiency. Regarding the former, the Inspiron 14 2-in-1 slots in between the 28-watt 11th-gen four-core/eight-thread Core i7-1165G7 and the Core i7-1260P. That’s not necessarily a verdict on the Core i7-1255U’s performance because we need to account for Dell’s thermal design and tuning. We’ll need to test more laptops with the chip to draw any firm conclusions.

Surprisingly, the Inspiron 14 2-in-1 was quite fast in single-core tests.

As usual, I used the laptop’s thermal tuning utility that allows adjusting fan speeds and CPU frequencies to optimize for quiet and cool or loud and fast operation. I’ve reported both balanced and performance modes in the table below, but the utility wasn’t as impactful in the Inspiron 14 2-in-1 as similar utilities have been in some other laptops. In addition, as with most thin-and-light laptops we test, there was some throttling in our more CPU-intensive benchmarks, particularly in performance mode.

Surprisingly, the Inspiron 14 2-in-1 was quite fast in single-core tests in Geekbench 5 and Cinebench R23, beating every laptop in our comparison group except the Lenovo Yoga 9i Gen 7. It wasn’t as fast in multi-core mode as the Core i7-1260P-equipped laptops, particularly in performance mode, nor was it able to keep up with the AMD Ryzen 7 6800U in the Asus ZenBook S 13 OLED. Its score in our Handbrake test that encodes a 420MB video as H.265, was the second slowest overall, coming in just ahead of the Asus ZenBook 14X OLED with a Core i7-1165G7.

The Core i7-1255U, at least in the Inspiron 14 2-in-1, was a slight step up from the 11th-gen Core i7. Notably, the newer model is slower than the previous generation with the AMD Ryzen 7 5700U. Overall, the Inspiron 14 2-in-1 7420 was fast enough for demanding productivity workflows, but it wasn’t particularly quick at CPU-intensive creative tasks.

We dinged the previous-generation Inspiron 14 2-in-1 for its poor display, a 16:9 panel with well below-average colors and brightness. Unfortunately, although Dell improved the display to a 16:10 version at Full HD+ (1,920 x 1,200), everything else remained roughly the same (or worse). As I used the latest review unit, I was reminded of that display — and not in a good way.

The colors weren’t even close to the midrange and better average of 95% of sRGB and 75% of AdobeRGB, at just 63% and 48%, respectively. Color accuracy was also poor at a DeltaE of 3.35 (1.0 or less is considered excellent). The contrast was above average at 1,330:1, exceeding our threshold of 1,000:1, but the brightness was just 288 nits, below our preferred 300 nits. It’s true that the laptops in our comparison group are all more expensive, but the Apple MacBook Air M1 and Microsoft Surface Go 2 are in the same ballpark and have much better displays.

This is an unfortunate display on a laptop exceeding $1,000, particularly given that IPS displays have generally improved. And it’s even more unfortunate this time, given that the previous generation was faster and longer-lasting (see below).

The Inspiron 14 2-in-1’s keyboard is wide and spacious, with large keycaps. The switches are exceptionally light, with a solid click as keystrokes bottom out. They’re maybe a hair too light, though, as they lack the precision of a Dell XPS or HP Spectre keyboard.

The touchpad is 14% larger than before, with a mylar material that provides a smooth surface that’s comfortable for swiping. It’s a Microsoft Precision touchpad, of course, so Windows 11 multitouch gesture support is precise and reliable. The clicks are solid and quiet enough, making the touchpad a pleasure to use.

The display is touch-enabled and works as well as usual. It supports Dell’s optional Active Pen, which I tried out and found as good for inking as most 2-in-1s today.

Windows 11 Hello password-free login is provided by an optional fingerprint reader embedded in the power button, which is precisely the right place. It worked quickly and reliably during my testing.

The webcam is Full HD, which is a nice upgrade. It provided a clear and sharp image that should keep hybrid workers happy as they interact with their colleagues. There’s also a physical privacy slider that covers the webcam for some additional privacy.

Judging a laptop’s battery life can be a challenge. While the absolute numbers are clear, letting us see how long a laptop lasts against its competition, determining which factors led to its longevity can be complicated. That’s particularly true with a laptop that has a brand-new CPU that’s meant to be more efficient. So many factors come into play that it’s difficult to point to just one as the cause of really good or really bad battery life.

The Inspiron 14 2-in-1 is a case in point. It has 54 watt-hours of battery capacity, which isn’t a lot for a 14-inch laptop, even given the lower-resolution Full HD+ display. The Lenovo Yoga 9i Gen 7, for example, has 70 watt-hours, but it also has a power-hungry high-res OLED display and a faster CPU.

At the same time, the Lenovo Thinkpad X1 Yoga Gen 7 with a Core i7-1260p has just 57 watt-hours, not significantly more than the Inspiron, but our review unit was equipped with a low-power Full HD+ display. Looking at our battery life test results, the Inspiron fell well behind both laptops on two of our tests and was generally below average, even though its CPU is meant to be a more efficient option.

In our web-browsing test that cycles through a handful of popular and complex websites, the Inspiron 14 2-in-1 managed just 6.75 hours, a few hours less than we like to see. It hit 10 hours in our video test that loops a local Full HD Avengers trailer, which is about 90 minutes less than average. Finally, in the PCMark 10 Applications battery test that’s the best indication of productivity battery life, the Inspiron made it to 8.75 hours, also a bit less than average.

Overall, battery life wasn’t great, and the Inspiron 14 2-in-1 may struggle to make it through a full day of anything more than a light productivity workload. As I mentioned above, we can’t draw strong conclusions about the Core i7-1255U’s efficiency from testing one laptop. Too many other variables come into play, and we’ll have to wait to test more laptops before a pattern emerges. Interestingly, the previous Inspiron 14 2-in-1 generation with the Ryzen 7 5700U got significantly better battery life.

The Inspiron 14 7420 2-in-1 takes a step back in performance and battery life from the previous generation while retaining the same subpar display. It’s attractively priced at $1,050, but you’re making too many compromises.

While I was able to recommend that last version, this one doesn’t make the cut. It would be worth spending a few hundred dollars more to get a better laptop, or even a few hundred dollars less for laptops that perform as well even though they’re based on older CPUs. Or, you can wait for the $1,000 laptop class to catch up to Intel’s 12th-gen wave.

If you want to save some money, then you could consider the Asus Vivobook Flex 14. It has a similar display and performs similarly even with an older CPU, but the battery life is better.

The Inspiron 14 2-in-1 is robust enough to provide years of productive use, with modern components (except for no Thunderbolt 4 support) that should keep Windows 11 running smoothly for quite some time. The industry-standard one-year warranty is disappointing, as always.

No. While it’s priced right, you’ll make too many compromises. There are many other 14-inch laptops to consider that are faster, longer-lasting, and worth some extra cash.

Topics
The Galaxy Book 3 Ultra is Samsung’s most powerful laptop ever
Samsung Galaxy Book 3 Ultra vs. MacBook Pro 16-inch
The first RTX 4080 laptops are much cheaper than we expected
Best HP laptop deals: HP Envy, HP Spectre x360, and more
The best PC power supply for 2023
ChatGPT has a new way to detect its own plagiarism
Nvidia may have another monster GPU in the works, and the price could be outrageous
AMD’s Ryzen 9 7950X3D pricing keeps the pressure on Intel
What is ChatGPT Plus? Everything we know about the premium tier
ChatGPT Plus to bring priority access during peak times — at a hefty price
Usually $3,879, this Lenovo laptop is down to $1,479 today
Get this Asus gaming laptop with an RTX 3060 while it’s $400 off
All of Samsung’s videos from today’s Galaxy Unpacked event