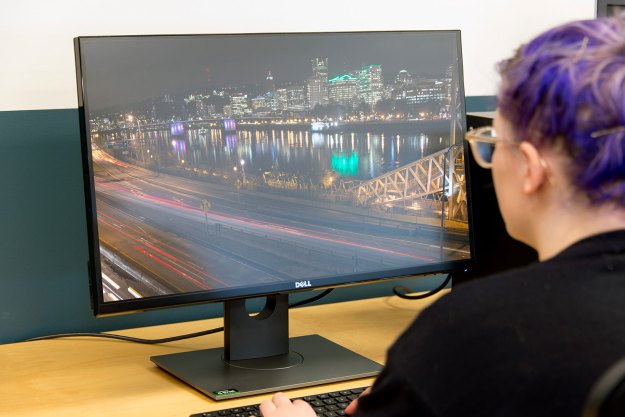 “The Dell S2716DG wins a few battles, but ultimately loses the war.”

Refresh rate has become important for gaming monitors. The higher the better – and they have to throw in adaptive display tech, too. Based on that criteria, Dell’s new S2716DG is a top competitor. The 27-inch 1440p panel boasts a 144Hz refresh rate, with Nvidia’s G-Sync technology ensuring smooth, tear-free gameplay. Plus, a one millisecond response time means you’ll never feel slowed in a game of Counter-Strike.

But is speed and agility all gamers want out of their screens? Deep black levels are a huge part of convincing graphics, and colors have to be vivid – if they’re not, everything else is a moot point. Dell makes no promises about gamut or contrast on the S2716DG’s information page, which is worrying.

This Dell technically has an $800 sticker price, but is actually available as little as $400. That’s not as frugal as the cheapest 1440p screens, but it falls a couple hundred below the most advanced gaming displays. Is this a gamer’s dream monitor, or is it bound for the clearance rack?

There are no surprises when it comes to Dell’s monitor design. The screen is fitted with a glossy black bottom edge, and a recessed bezel that’s only about a quarter inch thick when the screen is powered up. Despite the familiar look, the Dell actually has a bit of a fat lip. There’s a definite gap between the panel where the buttons are mounted and the front of the bezel, and the power button light shows through the panel when pressed.

We’ve seen the stand before, as well. It’s a common Dell model, with a circular hole for running cables. It holds the screen firmly in place, and allows it to rotate, tilt, lift, and swivel. That’s better than most screens offer, and it’s VESA compatible for easy wall-mounting. The glossy back panel is a slight departure from the typical matte finish, but it’s not a change that’s going to upset most users.

Connectivity is always a strong suit for Dell monitors, and this is no exception. The display features both DisplayPort and HDMI connections, and four USB 3.0 ports — two on the side, and two on the back. There’s audio pass-through for HDMI connections as well.

A lot of manufacturers have switched to touch sensitive on-screen display controls which, while futuristic, can also be a righteous pain in the ass. Instead, Dell’s on-screen display controls are physical buttons with distinct bumps, and they require a fair bit of pressure to activate. That makes it easy to run a finger along the bottom of the panel to find the right button, without shutting off the monitor by accident.

Speaking of on-screen displays, the actual options on the Dell aren’t particularly expansive. Brightness and contrast can both be adjusted from zero to 100, and there are warm, cool, and custom RGB color profiles. There’s also the option to switch between normal and fast response times, but that’s where the picture settings end. The rest of the on-screen display controls deal with shortcut keys, on-screen display sleep times, and letting you reset the monitor to factory defaults.

You win some, you lose some

Right out of the box, the Dell S2716DG’s image quality is mixed. And it’s competing with excellent screens like the Asus ROG Swift PG279Q and Acer XB270HU, which are both more expensive than the Dell, but competing for the same desk space.

Maximum brightness is a solid 335 lux, which is above average, but doesn’t quite reach the competing PG279Q’s 391 lux, and tails just behind the XB270HU’s 342. Contrast ratio is decent, offering up 600:1 at full brightness. That’s better than most, but falls short of other dedicated gaming displays, like the Acer XB270HU and the Asus PG279Q, which both break 700:1.

Color accuracy is middling at 3.01, where a lower score is better, and a score under one is best. Once again, the Acer and Asus both beat out the Dell with scores of 1.61 and 2.17 respectively.

The Dell only produces 93 percent of the sRGB spectrum, which might sound like a lot — but even cheap displays typically reach into the high 90s, and both 1440p gaming monitors mentioned above produce 100 percent right out of the box. AdobeRGB coverage is 69 percent, while the Asus and Acer both reach the high 70s.

Gamma is too low, coming in at 2.0 instead of an ideal 2.2, which is perhaps the worst problem. Low gamma means the middle tones of the image are rendered too brightly, which in turn causes a number of issues that are detrimental to the viewing experience. Colors are muted, contrast is poor, and black levels aren’t as deep as they should be. Gamma is the only area where the Dell really falls behind its competitors, but it drags the screen down, producing a lifeless viewing experience.

“Should” being the key word

Unfortunately, calibration didn’t do much to solve some of the more prominent issues. Contrast is slightly improved, moving up to 630:1 at full brightness. Color accuracy improves to a healthy 1.23 as well, where any score under one is generally considered undetectable by the human eye. These were already stronger points for the screen, however, and the practical effect of the upgrade isn’t significant.

Color gamut improves a few points on each side, up to 96 percent sRGB and 72 percent AdobeRGB. It won’t win any awards for those scores, but they’re more competitive than they were before. Black levels hold firm, still not reaching an ideal zero with the brightness turned all the way down.

Most frustrating of all, gamma remains low at 2.0, and that’s a change that the calibration tool typically makes easily. Like before, this one setting dulls a lot of the improvement we saw in other areas. The image isn’t as convincing or lifelike as we’d like, especially for a gaming monitor.

The good news is this panel is equipped with Nvidia’s G-Sync, which is enabled when using an Nvidia GTX 650 Ti Boost, or better, over a DisplayPort connection. It keeps the refresh rate of the monitor and GPU locked so there’s no tearing or stuttering, as frames are loaded to the buffer and displayed as they’re ready.

The feature works perfectly, and is most effective when a system can’t maintain a constant framerate with the settings cranked up. Most systems aren’t going to be able to take advantage of the Dell’s 144Hz refresh rate, at least at its maximum 1440p resolution, so this is a nice compromise.

If you’re not on the green team, or your setup is beefier, the Dell includes an Ultra Low Motion Blur mode. It works at 120Hz, and reduces backlight brightness and refresh in order to reduce motion blur to an absolute minimum. It works best on machines that can hold a constant 85 or 120 frames per second in games, and is incompatible with G-Sync, which has to be turned off before enabling ULMB.

The Dell includes a three year limited warranty on its hardware. Following a phone troubleshooting session, Dell will replace or repair the monitor. That’s on the long side for displays, which usually offer one or three years, depending on price point.

Not the best, but priced in reach

Gamers are a tough crowd to market monitors for. Not only is the golden combination of features changing constantly, but the audience knows exactly what they want in a display, and won’t mind telling you if you’ve done something wrong. The low gamma is a serious bottleneck on an otherwise decent monitor, and its effect permeates the viewing experience.

The typical advantage of a TN panel is price, though, and that’s where this monitor shines. Today, it sells for between $400 and $500. Competitors like the Asus PG279Q, or the Acer XB270HU, are often priced at several hundred more. The Dell S2716DG is particularly inexpensive for a major brand-name monitor with G-Sync support. You can find alternatives on the same budget, but only from lesser known brands like Agon and AOC.

The Dell S2716DG doesn’t perform well enough to earn our recommendation. Still, if you want G-Sync support and simply can’t afford its better peers, you could do worse than settling for it.

Update 12/1/2017 by Matt Smith: Updated to reflect current pricing. Due to price drops, we have increased the score from 2.5 to 3 stars.