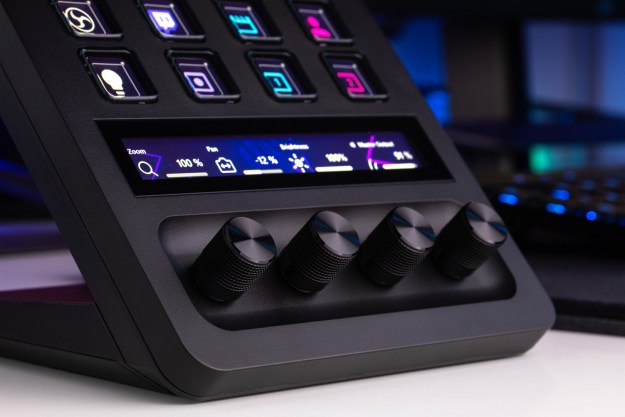 “The Stream Deck + is a godsend for professional streamers, especially those with complex audio setups.”

The Stream Deck is one of Elgato’s most successful and biggest product lines, often counted as a must-have accessory for serious streamers. Today, it’s adding another member of the family: the Stream Deck +. But this model is very different from other variants like the Stream Deck XL and the Stream Deck Mini, as it introduces dials and even a touchscreen into the mix.

Although a casual streamer such as myself would have a hard time utilizing four dials and a little touchscreen, the Stream Deck + is going to be a godsend for anyone who has a ton of things they need to adjust during streams, especially anything to do with audio. The only thing that’s lacking about the Stream Deck + are customization options for the dial and touchscreen.

Dials are making a comeback

The Stream Deck + is actually my introduction to the Stream Deck family; I’ve been a casual streamer for about a year now and I’ve invested a lot of time into improving my visual and audio quality, but I wasn’t entirely sold on the Deck. I knew having physical buttons would be nice for stuff like changing scenes and stuff, but I didn’t want to spend money to do that when I could just hit alt-tab and click for free.

I’m completely sold on this concept now, though. Being able to change scenes without alt-tabbing is extremely convenient and is a big timesaver. The Stream Deck + also highlights what scene is currently in use, and I’m sad to say I’ve forgotten to switch scenes several times, missing great moments in my favorite games.

Of course, this isn’t anything new, and the real question is whether or not these dials actually make a difference. In Elgato’s Stream Deck app, you can either assign a certain function to a dial or make a “dial stack,” which allows one dial to house multiple functions. In order to swap through each function, you just press the dial. Also, holding down the dial while turning allows you to make adjustments in 1% increments no matter what multiplier you’ve set.

A streamer with a complex audio setup will easily find clever ways to use the dials.

Truth be told, I don’t think I would use these dials very often. However, a streamer with a complex audio situation would probably be able to think of more clever ways to utilize this feature, especially if they’re using Elgato’s Wave Link software.

The touchscreen on the other hand is surprisingly less useful. Ultimately, it’s just another button you can press for each function. For example, on my audio dials, it mutes and unmutes whenever I touch it. It can also set my Facecam Pro’s autofocus to manual focus, and that’s where the touchscreen stops being useful. I don’t think the touchscreen hasn’t justified its existence (it has), but I am surprised that it’s not nearly as useful as the dials.

In order to actually use the Stream Deck + to the best of my ability, I decided to go and download all of the recommended apps Elgato provides for its products: the Stream Deck app (which is required anyways), Wave Link, and Camera Hub. Integration with Elgato’s software ecosystem is a key selling point of the Stream Deck +, and I wanted to immerse myself in it.

While I am worried about bloatware (I did have to download three separate programs, after all), I’ve come away impressed with Elgato’s software. Before I even installed any of these apps, I was particularly worried about system resource usage, but even as all three of these apps are running in the background, my PC isn’t running much hotter than usual, and I haven’t noticed any performance drops while gaming. Before we even talk about utility, it’s important that Elgato didn’t fall on this hurdle.

The Stream Deck app is straightforward and simple to use. Just drag and drop your desired function to the button or dial of your choice. You can also customize the icons on each button, as well as the background on the touchscreen. I didn’t do this personally (mostly because I’m lazy), but I do think I’ll be changing the icons for my scene change buttons just so I know for sure which is which.

Wave Link is also very useful as it allows you to separate the audio from different applications so that you can customize your personal listening experience, as well as that of your listeners. You can get the same thing out of open broadcasting software (OBS) by customizing audio tracks and stuff, but I really like Wave Link because it has integration with the Stream Deck, and the interface is arguably more streamlined and convenient than what you’d see on OBS. However, Elgato really needs to put out a complete guide on how Wave Link works, because it’s fairly complicated for someone who doesn’t mess with audio too much, such as myself.

The last app I got was Camera Hub, which I took a look at in my Facecam Pro review, and personally I don’t think many people will find it very useful to be able to zoom and pan using the dials. I think people who care about adjusting how they look on camera will appreciate Control Center more, because it interacts with Elgato’s Key Light, a streamer-oriented studio lighting solution. I don’t have a Key Light myself, but there are brightness and temperature control options in the Stream Deck app, and I think this makes sense to put on a dial.

Let me do zany stuff with these dials

Despite the good software, I had a hard time figuring out how I could use these dials, as Elgato doesn’t exactly give you a ton of options to work with here. To be clear, the screenshot undersells the amount of options because all those “adjust” options actually contain several sub-options within them. Still, I want to be able to do more than just change the volume or zoom my camera in and out or tweak some lighting.

It would have been really interesting if Elgato gave you the option to just go and do whatever you wanted with each dial, or at least offer some sort of in-app tool that could make a customized function. For example, I thought it would be convenient to put OBS scene changes on a dial rather than the buttons, because you could use the dial to select your scene and press the dial to change it to your selection. For me, that would consolidate four whole buttons into a single dial while being even more natural.

Allowing further customization would let the Stream Deck + live up to the potential of these dials.

Thankfully, the Stream Deck + will have third-party plug-ins, so maybe users will be able to put these dials and the touchscreen to good use. However, only select developers currently have access to the software development kit (SDK) needed to make these plugins, and the SDK will only get a public release some weeks after launch.

As it stands, there’s lots of potential with these dials, and to really harness that potential, Elgato should give you a way to make your own custom functions. This kind of feature would be quite technical and won’t appeal to the average person, but people don’t need to make their own little applets if they can just be shared online. Imagine if you could pick and choose custom functions like you can choose a user’s custom controller layout in Steam. That would be a big game-changer.

For professional streamers only

At $199, the Stream Deck + is the most expensive model of the entire family, and although the Stream Deck XL has a higher price, it can be found at Amazon for $200 at the time of writing. It’s also $50 more than the regular Stream Deck, which also has about double the keys and is more than twice the price as the 6-key Stream Deck mini.

If you’re a casual streamer, the Stream Deck + is certainly nice and useable, but it’s pretty expensive. So I would suggest one of the cheaper models or even an alternative. But if you’re a professional or aspiring professional streamer and you have tons of scenes and tons of audio inputs/outputs, and need something to organize it all, the Stream Deck + is probably going to be very helpful.