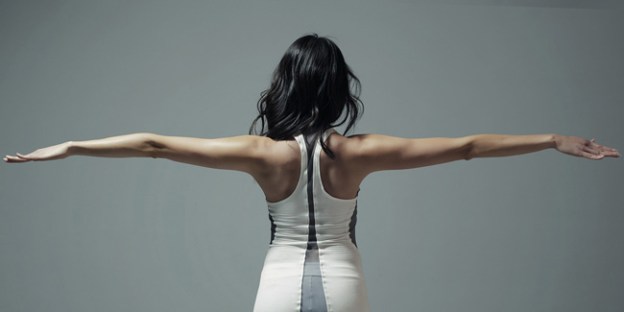 You’ve probably been coming across more and more futuristic fashion ideas these days, enough to make you think that the future of fashion might really be in wearable high-tech clothing. Take for example, this fancy sensor-equipped pilates shirt and drone-proof garments designed to protect their wearers’ privacy.

The sensor-laden pilates shirt called “Move” was developed by Jennifer Darmour of Seattle design firm Artefact. Darmour developed a prototype of the shirt that can monitor the position of its wearer’s body, thanks to four sensors strategically placed on its front, back, and sides. The moment it detects a wrong body position, it gives off haptic feedback – it vibrates – at the hips and shoulders, so you know you have to fix your posture.

Darmour believes that one of the biggest problems in current wearable computing designs is that they use hard plastics instead of flexible fabrics; she also thinks having to check all the data in a wearable computing device generates is unnecessarily interruptive to one’s tasks. When she designed Move, she aimed to surmount those issues. While Darmour doesn’t have any plans to produce the high-tech shirt commercially, she thinks the technology could be used in the future to help train athletes such as golfers. She will be talking about the shirt and about wearable computing on Saturday at the South by Southwest Interactive Festival (SXSW).

Another high-tech clothing of note is the drone-proof garment line by Adam Harvey, a New York City privacy advocate. These garments are a line of capes and scarves aptly called “Stealth Wear,” designed to hold in body heat (so you don’t get spotted by infrared, rendering you invisible to drones) and block cell signals. Harvey used a technology called “metalized fabric” to make the garments, and it’s actually been around for the past two decades. In fact, metalized fabrics are commonly used on electronics and communications equipment to protect them from both static electricity and electronics interference. One metalized fabric maker, for instance, is Saint Louis, Missouri-based Laird Technologies. At Laird, nylon or polyester fabrics are coated with a catalyst and then submerged in a copper sulfate bath. The catalyst helps copper bind to to the fabrics’ strands.

Harvey coats his garments not only in copper but also in nickel and silver, which makes them a bit too expensive for the Average Paranoid Joe. One of his burqas will set you back $2,300, a scarf costs $565, and a hoodie goes for $481. Harvey has sold only one of his products via his UK site thus far, but as he designed them to make a political statement rather than to make money, we’re guessing he’s not taking the lack of sales that badly. In the future, Harvey wants to design make-up and even hairstyles that can hide peoples faces from facial recognition software and surveillance cameras.

Why you should buy a refurbished Chromebook during back-to-school sales
Today’s Dell XPS 13 deal will save you $470
Lenovo’s Surface alternative is $1,850 off — you read that right
Save $300 when you buy two 4K monitors from HP today
This MSI gaming laptop has a $450 price cut at GameStop today
Best Apple deals and sales for September 2022
Best Alienware deals for September 2022
Best external hard drive deals for September 2022
Best iPad Deals: Latest models on sale from $280
How to watch Intel’s 13th-gen Raptor Lake launch (and what to expect)
Why I’m almost ready to switch to AMD GPUs for streaming
Big Tech’s superficial support is undermining the right-to-repair movement
How to sign a PDF on Mac