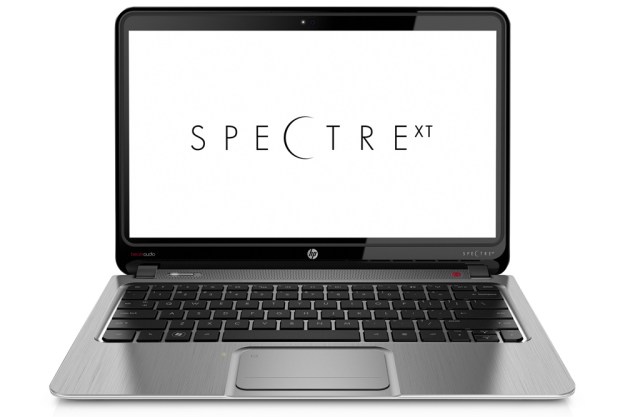 “The Spectre XT TouchSmart is representative of HP’s current PC strategy. It is a solid system that takes no risks. Every element is as adequate as it needs to be – and no more.”

Touch is all the rage with the youngins, these days, but that doesn’t mean all hardware manufacturers have taken to touch with equal vigor. Many are slapping touch on to existing platforms and shipping them out as new models, regardless of their similarity to what’s already on the shelf.

HP has given us reason to believe it’s taking the revolution more seriously with the Spectre XT TouchSmart. This is not a revision of an existing notebook; it’s a brand new model, and the TouchSmart name carries some weight. After all, this is the banner HP rallied under while it conquered the touchscreen all-in-one market back in 2009.

Certainly, the specifications impress. Our review unit arrived with a Core i7 low-voltage processor, 8GB of RAM, and a 500GB hard drive assisted by solid-state caching. All of this can be yours for a reasonable price of $1,350. Let’s see if it can stand out from the horde of newly touch-enabled competitors.

The Spectre name was first uttered at CES 2012 alongside a new premium laptop, the Envy Spectre 13. It was the Envy to envy, a glass-lid design showcase that just happened to be a decent laptop. Though the less expensive Envy models were more practical, the Spectre absolutely stood out from the lineup.

Alas, HP’s decision to take the Envy name down-market has affected Spectre as well. That’s not to say the Spectre XT TouchSmart is an ugly laptop. We think it looks good, but it’s no longer unique. Attractive black glass has been exchanged for the elegant silver metal used by everyone in this business.

Build quality is generally up to the standards set by HP’s premium line. Chassis strength is high, panel gaps are small, and material quality is good.

Connectivity comes by way of Thunderbolt, HDMI, a combo headphone/microphone jack, a card reader, and three USB 3.0 ports. This selection stacks up well to the competition.

Not a unique touch experience

HP originally used TouchSmart to define its unique all-in-ones. Though not the first or only company to make them, HP set itself apart with a unique hardware and software solution designed specifically for hands-on use.

HP abandoned this approach in the Spectre XT TouchSmart. The touchscreen itself operates like any other, and HP bundled only a small handful of touch-capable apps. Windows 8 picks up the slack, so the touch experience is not handicapped. Still, this notebook is no different from any other touch-enabled PC on the market.

Keyboard quality is disappointing. While there’s plenty of space, and individual keys are well-defined, key feel is soft and spongy. We found ourselves mysteriously missing keystrokes because our fingers could not accurately discern when a key had been depressed far enough to activate it.

Backlighting is standard and is activated via a keyboard shortcut. Only one brightness setting is available, however. We also don’t like how HP always lights the keyboard backlight shortcut when backlighting is not active. This makes the key easy to find in the dark, but it also distracts when watching movies in a dark room.

Thankfully, the touchpad is excellent. Though the left/right mouse buttons are integrated, the travel of each is excellent and the activation area is large. Multi-touch gestures are wonderfully smooth and the edge of the touch surface is well defined. The Spectre XT TouchSmart has one of the better touchpads we’ve recently used; which is a bit ironic, as its high quality discourages use of the touchscreen.

HP gets serious about laptop dispays

Quality displays were common for Envy laptops but were often an optional upgrade. That’s not the case here. HP has popped in a 1080p IPS panel that made an excellent first impression.

Our tests revealed the display to be among the best available in a modern Ultrabook. It renders 80 percent of the sRGB scale and reaches an excellent peak brightness of 303 nits. It also offers deep black levels and excellent overall contrast.

We have absolutely no complaints and can confidently rank this panel above even those found in Asus’ Zenbook line. Only gaming laptops can exceed the quality found here.

Similar praise is given to the system’s ear-ringing speakers. These suckers are loud yet also capable of distortion-free music and movie reproduction. Beats branding is part of the package, too, which means the inclusion of excellent software audio controls. Most people will have no need for external speakers.

Audio sometimes isn’t the only noise emitted by the Spectre XT TouchSmart. Though quiet at idle, our benchmarks revealed the system fan can emit up to 47 decibels at load. Most laptops of equal size are not as loud.

Temperatures do benefit from the aggressive fan. We recorded a maximum external reading of 99.7 degrees Fahrenheit while running the Furmark stress test. Idle temperatures maxed out at 83.1 degrees. These results are better than the average Ultrabook and indicate a system that is often cool and comfortable to use.

Bloatware is the bane of big-name PC manufacturers, and this premium system is no exception. There are a number of apps pre-installed, including Norton antivirus, and they slightly clutter the Windows 8 Start screen.

Windows 8 desktop users, however, will be happy to see a lack of unwanted icons. Only a few extras are pinned to the taskbar, and some, like Adobe Elements, are useful. HP has also gone light on software that launches a service at boot. System responsiveness benefits from this restraint.

Though technically an Ultrabook, the Spectre XT TouchSmart is also a 15.6-inch system. It feels bulkier than its 0.86-inch thickness implies and weighs in at almost five pounds. This is very much a “backpackable” system rather than one ready to be thrown in a small messenger bag.

HP was apparently aware of this and decided the system only needed a small 4-cell battery, which has a negative effect on endurance. In our tests, the system managed to surf the Web for just 3 hours and 41 minutes. This was extended to nearly 5 hours in our light-load reader’s test, but also reduced to just 1 hour and 55 minutes in the Battery Eater load test.

These results are below average, though not embarrassingly so, as most Ultrabooks offer just over 4 hours of Web surfing. Still, poor endurance combined with significant bulk makes the Spectre XT TouchSmart a poor choice for frequent travelers.

Our power tests reported that the system’s idle power consumption is around 14 watts when the display is at 50 percent. Running 7-Zip’s benchmark increased this figure to 26 watts. These numbers are higher than average for the category, though only by a couple of watts.

Large systems like the XT are built to perform. The Core i7-3517U in our review unit (a standard feature!) did not disappoint. SiSoft Sandra’s Processor Arithmetic bench turned in a score of 43.43 GOPS, and our 7-Zip test reached a combined result of 8,243 MIPS. These figures are above average for Ultrabooks and are on par with dual-core desktop replacements.

PCMark 7 blew us away with its score of 4,727. This is far above average for the category and beat by only a few other high-end systems like the Asus Zenbook U51Vz, which is much more expensive. The result is particularly good for a laptop that offers a mechanical hard drive paired with a solid-state cache drive. Users can expect the laptop to feel snappy in typical day-to-day use.

Graphics performance, however, is weak. There’s no discrete GPU magic lurking inside – just Intel HD 4000. 3DMark 06 reached a score of 5,045, and 3DMark 11 came to 665. Both figures represent a laptop that can play many 3D games, but new titles will be restricted to low resolution and detail settings.

The Spectre XT TouchSmart is representative of HP’s current strategy. It is a safe, solid system that takes no design risks. Every element is as adequate as it needs to be – and no more.

What results is a laptop that looks nice but is less than the sum of its parts. Competitors offer more intriguing designs, better keyboard quality, and more endurance. Some even offer all three.

Technical excellence saves the XT from itself. We have not yet tested an Ultrabook with a better display, and the system offers strong performance in all areas except 3D graphics. Audio quality is enjoyable, as well, which may seal the deal for audiophiles.

All of this is offered for just $1,274. We think the ASUS Zenbook U51 and Apple Macbook Pro 15-inch are better, yet they are also much, much more expensive. Laptops like the Lenovo U510 and Dell XPS 15 are more appropriate competitors – and the XT stands up well against them.

The best laptops you can buy in 2022
Asus launches world’s lightest 14-inch laptop with monster battery life
This RTX 3070 gaming laptop deal for $1,000 officially wins Cyber Monday
The best Black Friday laptop deals for 2022
Nvidia and AMD GPU prices could skyrocket again in 2023. Here’s why
How to safely overclock your Intel or AMD CPU
ChatGPT: how to use this viral, often hilarious AI chatbot
What does the lock mean on Snapchat?
I replaced my MacBook with a Quest Pro for a full work week. Here’s what happened
How to post a Short on YouTube
How to block people on Snapchat
The best OLED monitors you can buy
Mass shipment of Apple’s mixed-reality headset may be delayed