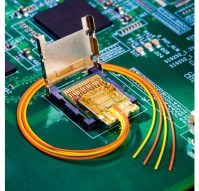 This Thursday, Intel plans to unveil its new high-speed connection technology, “Light Peak,” according to a CNet report. The news boosts rumors that Apple will release its latest line of MacBook Pro laptops, also on February 24, which are expected to incorporate the Light Peak technology.

According to an official Intel media statement, the chip maker will hold a “press briefing” in San Francisco on Thursday “to discuss a new technology that is about to appear on the market.”

Funny enough, Apple is also expected to make a big announcement on Thursday, which could include not only a new line of MacBook Pros, but also an update to its line of iMac desktop computers — though that last part is far more speculation than fact, so potential iMac customers shouldn’t hold their breath on that one.

Reports out this morning from 9to5Mac indicate that Intel’s Light Peak technology will be called “Thunderbolt” by Apple, based on a couple of blurry shots taken by the unpronounceable German Apple blog fscklog.com. Another leaked photograph, which is purportedly of new MacBook Pro, shows that the Light Peak/Thunderbolt port will go where the MiniDisplayPort was on the last MacBook Pros. If true, it’s not yet clear where the MiniDisplayPort will go.

So why is Light Peak a big deal? Because it’s significantly faster than any other standard connection, of course. So fast, in fact, that it could push USB out of its top spot in the world of data transfer connections.

Even twice the speed, however, means a new standard connection could be born this week — and it looks like Apple plans to be first on the bandwagon.

Topics
Apple’s massive spring event could be dead on arrival
Asus Zenbook Pro 16X vs. Apple MacBook Pro 16: creator laptop battle
The best desktop computers for 2023: Dell, HP, Apple, and more
People are slamming Apple for its ‘brutal’ trade-in prices
Best microSD cards in 2023: top picks for your computer, camera, or drone
The best game-streaming services for 2023
Ranking all 12 versions of Windows, from worst to best
If you think PCs are dying, you haven’t been paying attention
What is ChatGPT Pro? Everything we know about its response to capacity issues
I built a couch gaming PC that puts the PS5 to shame — and you can too
AMD Ryzen 7000: availability, pricing, specs, and architecture
ChatGPT: how to use the viral AI chatbot that’s taking the world by storm
Save $600 on Alienware gaming PC with an RTX 3080 Ti today