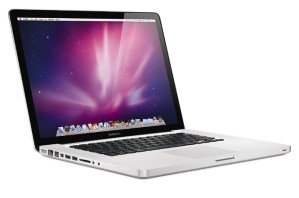 New MacBook Pros are in the air. We’ve been hearing it for a while, but now a  variety of concrete signs show that Apple will soon release its newest line of MacBook Pros, possibly Thursday, February 24. (Which is also Steve Jobs’ 56th birthday, just FYI.)

The first sign is a fairly obvious one: The online Apple Store has placed a three to five day wait on sales of the MacBook Pro line, reports 9to5Mac. That delay would line up just right with the rumors that the new MacBook Pros will arrive on Thursday. So, kudos to Apple for keeping their customers from spending a significant wad of cash on a computer that’s about to be pushed to the second tier.

Our last, but certainly not least, indicator comes from Apple Insider, and is perhaps the most solid piece of evidence of a new Apple release yet: Actual “sealed packages” arriving at select Apple Stores. According to an unnamed source, certain European Apple Stores will begin receiving shipments of something, which they are not allowed to open until an official announcement. Those “somethings” are most likely new MacBook Pros.

The pallets of product are said to be wrapped in black plastic and “Apple Confidential” tape. And if any of the stores decide to open those packages before Apple’s official unveiling, the company has allegedly threatened to revoke those stores’ licenses to sell Apple products. All this matches past Apple release protocols.

Short of someone at Apple breaking ranks and confirming the new MacBook Pros ahead of schedule, all these signs are about as good a proof as we can get.

If previous reports are true, the new MacBook Pro line will be powered by Intel’s second-generation Core i-series processors, which are reportedly much faster than previous iterations. The line will also receive moderate design changes, be thinner, lighter and have longer-lasting batteries.

Topics
Mac Pro 2023: performance, a familiar design, new displays, and more
Apple spring event: massive Mac launch, XR headset, and more
HP Dragonfly Pro vs. Apple MacBook Pro 14: a solid alternative?
2 ways the new MacBook Pro may be worse than the 2021 model
This 8K monitor has 3D tech that can be viewed from all angles
Microsoft continues its unabashed embrace of ChatGPT and AI
Don’t fall for this Mac Mini M1 deal — buy this instead
No, AMD CPUs and GPUs won’t get cheaper — the CEO reveals why
Best Gaming PC Deals: Save on RTX 3070, 3080, 3090 PCs
Don’t miss this Samsung Galaxy Book 3 Ultra pre-order deal
Experts fear ChatGPT will soon be used in devastating cyberattacks
Lenovo’s Surface-style Chromebook just got a big price cut
Save $620 on this Lenovo gaming laptop with an RTX 3070