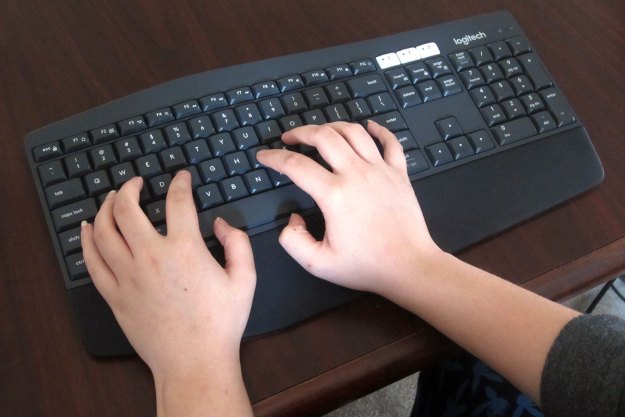 Unless you buy an upscale gaming or some other specialized PC, chances are the keyboard and mouse that comes with your new computer is boringly and often uncomfortably basic, and more than likely wired via separate USB cables for both devices. If you spend a lot of time typing and mousing around, you might want to consider something easier on your wrists and fingers, such as the Logitech MK850 Performance Wireless Mouse and Keyboard Combo we’re reviewing here today. The MK850 lists for $100, but is frequently sold for $80.

If you’ve done any shopping around, then you already know that the array of available products, either keyboards and mice sold separately or combo products, is dizzying. Not only does Logitech offer several combos, including the Wireless Keyboard K350 & Performance Mouse MX Bundle ($135), but so does Microsoft, such as its Sculpt Ergonomic Desktop ($130) and the Wireless Discomfort Desktop 5050 (which we’ll be reviewing shortly).

While many of these input peripherals have been designed to maximize comfort and convenience, the MK850 has the uncommon ability to pair with up to three separate computing devices and switch between them with the touch of a button.

The MK850 combo is a knockoff of the Logitech K780 Multi-Device Wireless Keyboard, as well as the M720 Triathlon Multi-Device Wireless Mouse, two existing products that the company released a while back. While the K850 keyboard doesn’t look much like the K780, it has much the same functionality, which we’ll get into momentarily. The keyboard deck and keys are encased in dark gray (almost black). Combined with the cloth covered palm rest along the bottom, it measures about one inch high, by 17 inches wide, by 8.3 inches from top to bottom, and it weighs 1.6 pounds.

The underside of the keyboard is encased in off-white plastic and, in addition to several rubber feet, you’ll find a compartment that houses two included AAA batteries, as well as two sets of stands for adjusting tilt angles to either four or eight degrees. In addition, the deck and keys are arranged in a raised ergonomic contour profile designed for comfortable prolonged typing.

Except for the right and left buttons and scroll wheel, the mouse is covered with a comfortable, rubbery material, and it measures two inches high, by three inches across, by five inches from front to back, and it weighs just under five ounces. The right and left buttons, as well as the buttons along the right side where your thumb goes, and yet another small button just above the scroll wheel (for adjusting scrolling speed), are all made of the same dark gray plastic as the K850’s keys and keyboard deck. The scroll wheel is made of chrome-colored plastic, with a dark gray grooved strip encircling the edge. The underside, where you’ll find an on/off toggle and a small compartment that houses an included AA battery, consists of the same off-white plastic that’s on the bottom of the keyboard.

Over the past few years, Logitech has offered a few “multi-device” input peripherals, including the K780 keyboard and the M720 Triathlon mouse mentioned earlier. A key feature of these peripherals is their ability to pair with up to three computing devices– such as, say, your Android smartphone, iPad tablet, and desktop PC or Mac. Once paired, you can switch back and forth between them with the press of a single button.

The deck and keys are arranged in a raised ergonomic contour profile, designed for comfortable typing.

As do Logitech’s other multi-device keyboards, the K850 remaps the keys corresponding to the current operating system (OS). The Windows’ Alt key, for instance, becomes the Command key when you pair with a Mac. When you pair with an Android device, the first four function keys become Home, Menu, Back, and Search.

The mouse buttons, too, assume the appropriate roles according to the paired OS. A primary difference, though, between the K780 multi-device keyboard and the K850, is that the former has a groove across the top for holding your mobile devices, such as your smartphone or tablet, upright.

Comfort and Other Considerations

Compared to some other so-called ergonomic keyboards, we found the raised contour somewhat shallow, and the keys themselves a little cramped, though not so much to make typing uncomfortable. The palm rest is appropriately cushioned, and the cloth over it feels pleasent. The chiclet-style keys are slightly concaved, and their plunge and travel feels just about right to allow for intuitive touch typing. Aside from the three Bluetooth pairing buttons mentioned earlier, the key layout is conventional. There is no backlight.

As for the mouse, it traveled across our mousepad quite smoothly. It felt pleasantly balanced, and its finger grooves and palm contours were comfortably arranged. In addition, the combo supports Logitech’s DuoLink feature, which allows you to modify the behavior of mouse movements and gestures by holding down the function key on the keyboard.

Holding the function key down while moving the mouse right can, for instance, cause the screen to scroll right, and vice versa, depending on how you configure it. DuoLink configuration, and other functionality, such as remapping keys and mouse button behavior, is controlled from Logitech’s downloadable Options software.

In addition to the batteries, which Logitech says should last for about two years or two million keystrokes, the box includes the company’s multi-device Bluetooth dongle, which lets you pair up to seven Logitech peripherals, as well as a USB extension cable for relocating the dongle to a more suitable position, if required.

Logitech warrants the K850 one year under normal use. That is typical for a new keyboard or mouse.

The Logitech K850 Performance Wireless Keyboard and Mouse Combo is a well-designed set of replacement input peripherals for users who desire maximum comfort and the convenience of wireless connectivity. Its ability to pair and switch between devices makes using it on multiple platforms and flipping back and forth between computing devices a snap. Compared to some other ergonomic keyboards, such as the Microsoft Sculpt Ergonomic, we found the keys a little cramped, but not enough to hinder performance significantly, if at all.

You’ll be hard-pressed to find another keyboard and mouse combo with the ability to pair and switch back and forth between devices and operating systems with the ease of the Logitech MK850 Performance. On the other hand, some other combos, such as the Microsoft Sculpt Ergonomic Desktop, provide better comfort.

Keyboards and mice typically outlast most computing devices. Even though the components in this combo are made of plastic, during our time with them they seemed well-built, durable, and in it for the long haul. While there is no way to tell for sure, we found no reason to believe they won’t outlast their warranty and then some.

If you’re looking for wireless connectivity among multiple devices and reasonable comfort, the MK850 combo is a good choice.