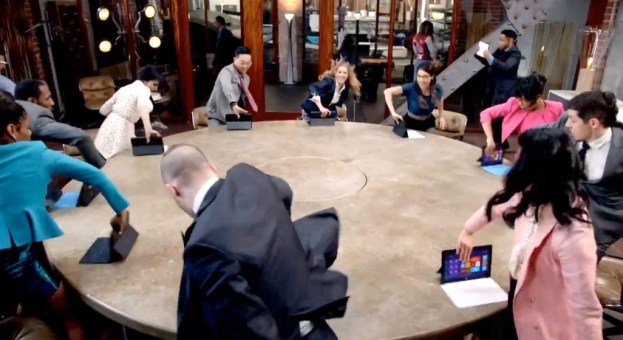 A new Surface Pro ad is here, even if the device isn’t. I’m referring, of course, to the apparent scant availability of the tablet – particularly the 128GB version – following its launch on Saturday, but more on that in a moment.

First, the ad. It’s set in an office the likes of which the majority of us will never have worked in. You see, everyone moves in unison, snapping their bodies this way and that, spinning on tables and pulling dance moves that would land most of us in hospital with a herniated disc.

Having said that, the action might all be taking place inside the mind of the guy who appears in the opening and closing shot. Ah, yes. That’ll be it.

The 60-second commercial (below), titled ‘The Vibe’, contains several of those satisfying clicks made when the Touch Cover keyboard connects with the tablet, together with a similar-sounding-but-not-quite-the-same click of the bundled pen as it detaches from the side of the device – indeed, it’s the pen rather than the Touch Cover that takes center stage in this Microsoft ad. There’s also plenty of dancing, bar charts, beatboxing (highlighting its USB connectivity), circling of graphs and swiping of displays, though not necessarily in that order.

If, after viewing the ad, you find yourself reaching for your wallet and car keys while at the same time saying, “Right, I’m off to Best Buy or Staples now to get one of these,” then you may do well to phone ahead before you leave home. According to reports over the weekend, the 128GB version of the Surface Pro tablet has sold out at many stores across the country, though whether this is down to inadequate supply or strong consumer demand isn’t entirely clear at this stage.

In response to a tweet on Saturday from California-based Manu Narayan who complained of being unable to get hold of a Pro tablet despite waiting in line at a Microsoft store and visiting branches of Best Buy and Staples, Panos Panay, general manager of the Surface team, tweeted, “Sorry to hear this. We are trying hard to get more Pro devices available ASAP.”

In the meantime, plenty of disgruntled would-be buyers of Microsoft’s new tablet have taken to the Surface blog to voice their unhappiness at being unable to get their hands on the device this weekend.