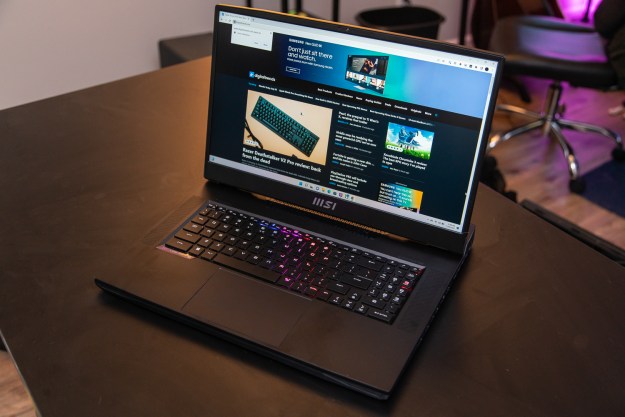 “The MSI Titan GT77 is powerful, but it's also overly hot, loud, and expensive.”

When Intel launched its first 16-core laptop CPU, one question reverberated throughout the world of high-end laptops: why? MSI’s 17-inch workstation replacement, the GT77 Titan, is among the first machines that try to answer that question. It features the 16-core Core i9-12900HX, and although it provides some benefits, they aren’t worth gunning for.

Multi-core performance is off the charts, but most applications are just fine with Intel’s non-HX offerings, especially considering that this is a gaming laptop, first and foremost. The GT77 Titan takes advantage of the new chip with an extra high price tag, as well, making it a bad value even compared to MSI’s other high-end offerings. The MSI GT77 Titan can go toe-to-toe with the best gaming laptops due to its 16-core CPU in performance, but it’s too expensive for that advantage to matter.

I wasn’t able to track down my exact configuration being sold online. It’s the $5,000 model, but mine came with a 360Hz 1080p screen. I’m not sure if MSI is actually offering this screen, but I wouldn’t recommend it. If any laptop justifies 4K, it’s the GT77 Titan. You likely won’t be able to take advantage of 120Hz at 4K in the vast majority of games, but 360Hz is only useful for highly competitive esports titles.

The MSI GT77 Titan is a massive laptop — but the whole “Titan” bit kind of gives that away, doesn’t it? It’s big even by the standards of 17-inch workstation replacements, though. It’s over 7 pounds, making it a pound heavier than the MSI GE76 Raider, and it’s big, measuring 15.6 inches wide and 13 inches long. It’s not as thick as I anticipated, though, clocking in at 0.9 inches thick.

A big part of the size comes down to the vents in the back, which aggressively jut out of the back to keep the 55W Intel processor and RTX 3080 Ti cool. MSI and Intel want to bill this as a workstation replacement, but the design makes it clear: This is a gamer’s laptop with bright RGB, aggressive angles, and enough cooling potential to put the Razer Blade 17 to shame.

You won’t be taking the GT77 Titan out and about with you, especially with the massive power brick in tow. But the machine looks excellent set up on a desk. The back vents spill out customizable RGB lighting to match the MSI shield on the top lid, and you have full control over the lighting on the SteelSeries mechanical keyboard when you open the machine up. The lid is a bit of a fingerprint magnet, though, as evidenced by the photo above.

A big laptop means a lot of space for ports, and MSI takes advantage. You have two USB-C ports capable of DisplayPort and Thunderbolt 4, three USB 3.2 Gen 2 ports, a full-size Ethernet jack, an SD card reader, a mini DisplayPort connection, and an HDMI 2.1 connection capable of 4K at 120Hz. These are all located on the side of the device, rather than on the back as some gaming laptops have begun doing.

The connectivity rivals a lot of desktops, minus a few USB-A ports. If you ever find yourself in need of more (doubtful), you can always hook up a Thunderbolt 4 dock to one of the spare ports, too.

Now for what matters: the 16-core Intel Core i9-12900HX behind the GT77 Titan. This HX processor boasts a 55W power limit and two more cores than the Core i9-12900HK, making it the most powerful mobile processor you can buy right now. At least, on paper.

It does manage to beat the previous i9 Intel has offered, as well as the i7 options lower down the stack. However, the benefits are limited to apps that can take advantage of a lot of cores. In Handbrake, for example, the extra cores helped finish the render 22% faster than the Core i9-12900HK in the Gigabyte Aero 16. That’s impressive.

On the other hand, though, it didn’t provide any benefit in Premiere Pro. And as you can see from my Cinebench and Geekbench results, the single-core performance is in line with the rest of Intel’s current-gen offerings. The Core i9-12900HX is the best, but not by much and only in certain applications.

Performant as it is, the Core i9-12900HX feels like an unhinged beast. It immediately shot to 95 degrees Celsius in a run of Cinebench R23 and never went below 85 degrees. And that’s despite the GT77 Titan sounding like a jet engine, attempting to keep the chip anywhere near cool.

It’s normal for gaming laptops to run loud and hot, but the GT77 Titan is concerningly loud. If you’re running an intense game or application, you’ll probably need noise-canceling headphones on to not hear the fans. And if you have anyone else nearby, get ready to annoy the hell out of them.

The GT77 Titan may be a workstation, but it’s a gaming laptop first and foremost. I was curious how the HX processor would push gaming performance, if at all, when paired with the powerful RTX 3080 Ti. Unfortunately, the answer is not much.

3DMark showed the Core i9-12900HX in action the most, which weighs the processor’s performance heavier than a lot of real games. Over the MSI GE76 Raider, which has the same GPU, you can see an 8% and 4% uplift in 3DMark Time Spy and Fire Strike, respectively.

The Razer Blade 17 with its Core i7-12700H isn’t far behind, though, and actually managed to beat the Raider in Time Spy. It’s a perfect illustration of how thin the margins are for gamers at the high end.

Getting into real games, there’s nothing selling the HX processor. In Assassin’s Creed Valhalla, the GE76 Raider actually outperforms the GT77 Titan, and both laptops manage the same frame rate in Fortnite. My tests were limited to 1080p due to the screen on my GT77 Titan, but I still pushed the GPU with Ultra graphics settings.

That doesn’t mean the Core i9-12900HX doesn’t provide any benefit. In CPU-intensive games like Red Dead Redemption 2 and Cyberpunk 2077, the extra cores and boosted clock speed provide a real boost in performance. Those benefits will disappear at higher resolutions, though, and the GT77 Titan is built for more than 1080p.

The Core i9-12900HX is a lot like the desktop Core i9-12900KS when it comes to gaming. It ekes out some leads in certain titles, but you’re largely getting the same experience as you would with the lower-powered option.

The 1080p display on the GT77 Titan is fine. I never expected a show-stopping display, especially at that resolution, but it would’ve been nice to see given the high premium MSI is charging for the machine. It’s decently color accurate but not particularly bright at 313 nits, and the black levels are good, but the contrast isn’t quite high enough for them to make a difference. It’s a well-calibrated display, though, with a measured Delta-E of 0.8.

It’s a shame there isn’t a brighter screen like the one available on the MSI Creator X16P or even a mini-LED option like the MacBook Pro 16 offers. The price certainly calls for a more premium screen. The plus of the display is its size. I was able to set up the GT77 Titan on my coffee table and lean back to play games with a controller due to how large the screen is.

The speakers are great and they get super loud.

Audio is much better thanks to two large upward-firing speakers situated around the keyboard. Dynaudio lead the design, and the speakers never distorted even when they were uncomfortably loud at full volume. MSI includes software from SteelSeries called Nahimic, as well, which lets you tune EQ and configure virtual surround sound.

The speakers are great, but I’m not sure how much use you’ll get out of them. They get super loud, but they’re always fighting against fan noise when playing games. Headphones are the way to go here, but the speakers are a good alternative for watching movies or browsing the internet.

One of the more unique aspects of the GT77 Titan is its mechanical keyboard. It comes with Cherry’s ultra low-profile switches, which give it a much more satisfying typing experience than a traditional laptop. At least in theory. After using the keyboard for a few weeks, I still prefer the traditional design on the Lenovo Legion 5 Pro.

The travel distance and click are both satisfying, but the keys just aren’t consistent. This is an Apple Butterfly keyboard situation. Dirt, hair, and dust can easily travel under the keys and cause them to hang, forcing you to press down harder for an actuation. This issue came up after only a few days of using the laptop, and although keys only occasionally stick, it’s still annoying for such an expensive machine.

The trackpad is large and worked perfectly with Windows Precision Drivers, but the webcam is a bit behind. It’s only 720p and prone to get grainy if you’re in a dark room. The difference is notable, especially since the MSI GE76 Raider features a higher resolution 1080p webcam. Videoconferencing certainly isn’t the focus of the GT77 Titan, though, and it’s large enough that you can strap an external webcam on the screen if you need.

Let’s be honest: you’ll rarely use the GT77 Titan apart from a charger. The battery life is decent, with the machine lasting for four hours and 25 minutes in my web browsing test. That’s about a half-hour more than the Razer Blade 17 and a few minutes more than the MSI GE76 Raider, but it’s far from the heights you’ll find on ultra-portable laptops from Apple.

It shouldn’t come as a surprise that the GT77 Titan comes with the maximum battery capacity you can carry on a plane (99Whr), but it feels like a downright puny capacity compared to the hardware inside the machine. All-day battery life isn’t an option for laptops in the class of the GT77 Titan, but the laptop can still last for a few hours away from an outlet given you aren’t gaming or running intense applications.

The GT77 Titan is a monster laptop that can rip through games and intense applications alike. Still, I don’t think you should buy it. The HX processor provides only modest gains in certain applications, and the price is far above other 17-inch laptops with similar specs. And that’s true even for other laptops from MSI.

It’s not a bad machine by any metric, but I’m struggling to see where the premium is going. There are some upsides like a second Thunderbolt 4 port and more room for DDR5 memory, but those advantages only apply to a small number of users. They don’t justify a $1,000 (or more) premium.

Yes. The most direct alternative is MSI’s own Raider GE76, which is also available with a 12th-gen Intel HX processor. The ROG Strix Scar 17 also comes with the same HX processor and is considerably cheaper.

The Razer Blade 17 is also an alternative for around $1,000 less, though it doesn’t have an HX processor and is focused more on portability than raw power.

With the hardware inside, you can expect to use the GT77 Titan for several years before replacing it.

No. Although the GT77 Titan is certainly a powerful laptop, you can get something that performs just as well for significantly less. The GT77 Titan is all about over-the-top abundance, and it comes with a price tag to match that goal.