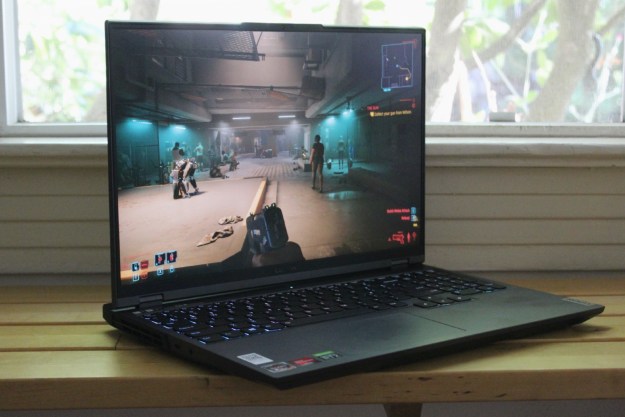 Gaming laptops keep getting thinner. Yet, there’s plenty of room in the market for gaming laptops that don’t sacrifice unbridled performance at the altar of portability.

The Lenovo Legion 5 Pro is one such gaming laptop. Its design is nothing spectacular, nor is the strain you’ll feel when lugging this thing around.

But for a decidedly old-school gaming laptop, the Legion 5 Pro gets the fundamentals right in a way that will make many performance-focused PC gamers very happy. The affordable starting price of $1,700 starting price will put a smile on your face too.

The Legion 5 Pro ain’t a looker. The oversized Legion logo on the lid isn’t exactly subtle, and the sleepy storm gray color and keycap font are straight out of Lenovo’s business laptop designs. Throw in the ThinkPad-like keyboard and the black vent pieces that seem glued on, and it’s a bit of a Frankenstein design.

I don’t have a problem with a stealthy gaming laptop that hides its gaming roots — like the Predator Triton 500 SE, or even the Razer Blade 15. But the Legion 5 Pro seems torn between both identities. Even its name seems a bit confusing, as it’s both in the Legion gaming line but also a “Pro” laptop. It’s less a blend and more a mishmash.

The design does have its strengths. The superthin bezels around the screen, for example, look amazing. Even the bottom bezel is relatively small, making for a modern design that puts the screen at the forefront. For that, you can thank the 16:10 aspect ratio, which is a new trend in gaming . Extra vertical screen real estate might seem unnecessary while gaming, but it sure comes in handy when you want to get some work done. Again, because the Legion 5 Pro toes the line, 16:10 makes a lot of sense.

The screen is also larger than your average 15-inch gaming laptop, measuring at 16 inches diagonally. That matches the Predator Triton 500 SE, but it’s still an uncommon screen size for gaming . But again, thanks to its small bezels, it doesn’t add any extra size to the overall footprint.

And that’s important, because the Legion 5 Pro is not small by any standard. It weighs 5.4 pounds and is 1.1 inches thick — chunkier than your average 15-inch laptop and most of the higher-end gaming out there. As we’ll see later, that extra size makes for great thermal performance, especially when compared to the Razer Blade 15, MSI GS66 Stealth, or even the Alienware m15 R4.

The Legion 5 Pro features an increasingly popular option for port placement: The rear side of the device. This makes the laptop’s footprint even larger, but it does a good job of keeping messy cables out of your way.

That leaves only ports you’ll really need quick access to on the sides. On the left, you’ll find a headphone jack and another USB-C. There’s a single USB-A port on the right side.

As for connectivity, the Legion 5 Pro supports Wi-Fi 6 and Bluetooth 5.1.

The Legion 5 Pro includes an excellent screen, both for gaming and for standard work. It’s native resolution is 2560 x 1600 to support the 16:10 aspect ratio, and can be downscaled to 1920 x 1200 for lower-resolution gaming.

According to my colorimeter, the Legion 5 Pro has one of the best displays I’ve ever tested on a gaming laptop. First off, it’s inordinately bright, maxing out at 550 nits of brightness. That’s even brighter than the most recent MacBook Pro or Razer Blade 15. It’s also a decently color-accurate panel, hitting 77% of the AdobeRGB color space.

The Legion 5 Pro has one of the best displays I’ve ever tested on a gaming laptop.

It’s rare to see a screen this bright, vibrant, and well-calibrated on a gaming laptop. Again, like the Predator Triton 500 SE, the Legion 5 Pro features that great image quality alongside a quick refresh rate, though 165Hz isn’t as high as the 360Hz panels you can get in 1080p gaming . But let’s be honest — unless you’re a professional esports gamer, you probably wouldn’t notice the difference while playing anyways. Gameplay feels plenty responsive and fast, especially since you’ll be doing most of your gaming in the native resolution.

The boost in resolution is worth the trade-off, especially on a screen this large. Pixels disappear thanks to how sharp it is, which matches what you get on the MacBook Pro. And thanks to the performance, you’ll find yourself using the full range of 165Hz even at native resolution.

As I’ve mentioned, the Legion 5 Pro is a chunky gaming laptop, and that affords it some better cooling. The result is pretty astounding gaming performance.

My configuration came with the AMD Ryzen 7 5800H, Nvidia RTX 3070, 16GB of RAM, and two 1TB PCIe SSDs. Lenovo also offers an identical configuration, except with the RTX 3060. You’ll save $150 there, but the RTX 3070 option should offer a noticeable increase in frame rates. It’s not currently available, but Lenovo also reportedly offers a confusing midtier model with just 1TB of storage but 32GB of . Most gamers will want to opt for more storage and less memory.

I included the benchmarks in 1080p in the chart above to level the playing field between these different , which include both 1080p and 1440p resolutions. The Legion 5 Pro handles all games at over 60 frames per second (fps), including the tough Assassin’s Creed Valhalla. As for lighter esports fare, the Legion 5 Pro landed an average of over 100 fps in Fortnite, with room to use the full range of 165Hz in lower settings.

At native resolution, which is how many people will likely use the Legion 5 Pro, you’ll still get 60-plus fps in most games. Battlefield V was right on the line at 60 fps, while Fortnite played fantastically at 83 fps. The system slowed down to 52 fps at 2560 x 1600 in Valhalla, so you’ll likely want to stick to lower resolutions for heavier titles like that.

The Legion 5 Pro is a great value for the performance offered.

Though the Legion 5 Pro with RTX 3070 consistently beat the MSI GS66 Stealth with RTX 3080 (and 1440p screen) in 3DMark runs, the MSI machine was decidedly ahead in every actual game I tested. Of course, newer configurations of the GS66 Stealth aren’t widely available right now — and if they are, they’ll be quite a bit more expensive. The same is true of the Razer Blade 15, which will easily cost you at least $1,000 more.

All of that sets up the Legion 5 Pro to be a great value for the performance offered. The one problem is the Asus ROG Strix G15, which offers a base configuration at a similar $1,650. It’s a more powerful laptop, no doubt about it. It’s a strength of AMD’s new Radeon RX 6800M graphics card, which beats the RTX 3070 in every case and challenges the RTX 3080 in some. The performance of the ROG Strix G15 is undeniable. I prefer the design and screen of the Lenovo Legion 5 Pro, but it’s hard to beat the ROG Strix G15 purely on value.

Throughout my testing, the Legion 5 Pro proved to be a well-cooled device. GPU temperatures never rose over 86 degrees Celsius, while CPU temperatures were even cooler. Surface temperatures did get warm at times, but never quite as hot as slimmer like the MSI GS66 Stealth or Razer Blade 15.

All configurations of the Legion 5 Pro feature the AMD Ryzen 7 5800H. It’s a powerful, 45-watt chip with eight cores and 16 threads. That gives you improved CPU performance over the 35-watt processors found in something like the ROG Zephyrus G14. The Legion 5 Pro had a particularly impressive single-core score of 1430 in Cinebench R23. It scores quite a bit higher than Intel-powered like the MSI GS66 Stealth as well.

I also tested CPU-based video encoding in HandBrake, and the Ryzen 7 was an absolute speedster. The GS66 Stealth, by comparison, was 24% slower in the same test. That ensures that the Legion 5 Pro is as good a machine for content creation and heavier CPU-based workloads as it is in gaming.

The Lenovo Legion 5 Pro doesn’t get great battery life. Other gaming have made advances in this realm, such as the Asus ROG Zephyrus G14, but the combination of the RTX 3070 and the G-Sync panel are a recipe for frequent use of the charging port. The 80 watt-hour battery isn’t quite as large as some of the 99-watt hour ones you’ll find in more premium gaming .

Still, battery life isn’t nearly as bad as a laptop like this would have been in years past, which is likely thanks to the efficient Ryzen processor inside. Just over seven hours in light web browsing isn’t awful. The second you boot up the discrete GPU, though, you’ll see that drop pretty fast. Then again, you probably shouldn’t be gaming without being plugged in anyway.

I should also mention the massive 300-watt power brick that ships with this thing. It’s a tank, and adds some heft in the backpack if you plan on traveling with the Legion 5 Pro.

The Legion 5 Pro uses a precise, ThinkPad-esque keyboard. It’s an odd look for the keycaps on a gaming laptop, but it makes for one of the best typing experiences you’ll find. The 1.5mm of key travel is luxurious, and the layout is perfect. The backlighting is fairly limited, with just four zones of customization (including the numpad) and an underwhelming software experience using Lenovo Vantage. The joy of the typing experience more than makes up for the lack of fancy backlighting.

That made the quality of the touchpad even more of a disappointment. It’s the kind of quality you’d find on a $400 Chromebook, not a powerful gaming laptop. It’s a large touchpad, which I appreciate. But the surface isn’t very smooth, meaning click-and-drag, pinch-to-zoom, or other gestures that require precise tracking can skip or feel clumsy. It’s frustrating, especially on a laptop that gets so many things right.

Above the screen, you’ll find a 720p webcam, which I’m happy Lenovo included. It’s still being left out of Asus’ ROG gaming to enable a thinner top bezel. The laptop doesn’t include any security features, however, lacking both a Windows Hello IR camera and fingerprint reader. These have become more common even in midrange gaming lately, so it’s a bummer to see Lenovo force you to rely on passwords and PINs for logging in.

Most gaming at this price can’t compare with what the Legion 5 Pro offers. The Predator Triton 500 SE matches the screen size, but is limited to just an RTX 3060.

The two biggest competitors to the Legion 5 Pro are from Asus. The all-AMD ROG Strix G15 is the ultimate value gaming laptop, while the ROG Zephyrus G15 matches the Legion 5 Pro in nearly ever spec for the same price. It doesn’t have as good of screen, but the Zephyrus G15 has a sleeker design and options for up to an RTX 3080.

The Lenovo Legion 5 Pro should last you at least five years. It’s a capable gaming laptop that should be able to handle the latest AAA games for many years.

Yes. The Lenovo Legion 5 Pro isn’t the sleekest gaming laptop in the world, but its performance and display more than make up for the difference.