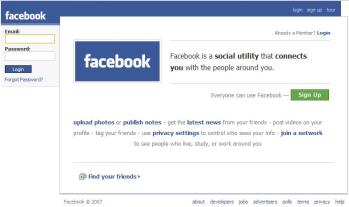 Facebook rejected a “frivolous” lawsuit filed by a New York man who claims he owns an 84 percent stake in the social network.

Facebook also said a temporary restraining order restricting the transfer of its assets issued by a Supreme Court judge in New York’s Allegany County would have no impact on its business.

In the suit filed in the Allegany County Supreme Court on June 30, Paul Ceglia, of Wellsville, New York, claimed he signed a contract with Facebook founder Mark Zuckerberg in April 2003 to design a website called “The Face Book,” or “The Page Book,” by January 1, 2004.

According to the lawsuit, Ceglia acquired 50 percent of the business and an additional one percent interest per day until it was complete.

The project, for which Zuckerberg was paid 1,000 dollars and received a 50 percent stake, was completed 34 days late, giving Ceglia an additional 34 percent stake in the business, the lawsuit said.

A Facebook spokesman said in a statement that the suit “is completely frivolous and we will fight it vigorously.”

Facebook also confirmed that legal papers served on Zuckerberg at a media retreat last week in Sun Valley, Idaho, were related to the case.

According to a book about Facebook’s origins published recently, “The Facebook Effect” by David Kirkpatrick, Zuckerberg did not begin to work on predecessors to Facebook until September 2003 and the domain “thefacebook.com” was registered in January 2004.

Facebook has become the world’s most popular social network with more than 400 million members.

New York state Attorney General Andrew Cuomo accused Ceglia, the plaintiff, last year of taking more than 200,000 dollars from customers of his wood fuel pellet company and then failing to deliver any products or refunds.

“This company and its owners repeatedly lied to consumers and continued to solicit new orders despite an inability to deliver wood pellets that were bought and paid for months before the winter heating season began,” Cuomo said.