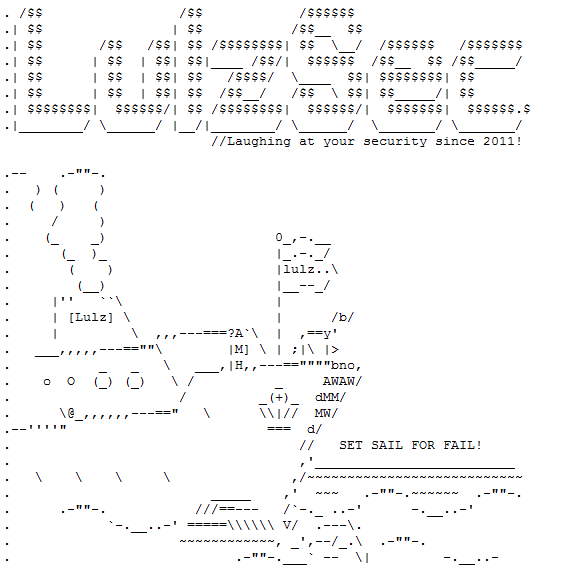 This is why we can’t have nice things: Following an attack on on PBS.org, Sony and an affiliate group of the Federal Bureau of Investigation, hacker clan Lulz Security (LulzSec) has now breached the systems of Nintendo, reports the Wall Street Journal. This time, however, no user data has been released, the Wii maker said on Sunday.

“There were no third-party victims,” said Ken Toyoda in a statement on the matter. “But it is a fact there was some kind of possible hacking attack.”

In an email statement to Reuters, Nintendo of America, Nintendo’s US operation, reiterated that no customer data was compromised in the hack.

“The server contained no consumer information. The protection of our customer information is our utmost priority,” the company said. “We constantly monitor our security.”

According to LulzSec, the only data obtained in the breach of the US-based Nintendo server, which reportedly took place a few weeks ago, was a configuration file. Why the restraint, you ask? LulzSec says it simply likes Nintendo too much to cause any real damage.

“Re: Nintendo, we just got a config file and made it clear that we didn’t mean any harm,” wrote LulzSec on Twitter. “Nintendo had already fixed it anyway. <3 them!”

As those who’ve been following LulzSec’s path of destruction already know, Sony didn’t get nearly as lucky. During the hack of SonyPictures.com, LulzSec claims to have stolen the user data of 1 million people. The data contained a variety of personal information, “including passwords, e-mail addresses, home addresses, dates of birth, and all Sony opt-in data associated with their accounts,” the group said.

LulzSec’s breach of Sony came just as Sony was managing to get its beleaguered PlayStation Network back online following a prior hack, carried out on April 19, that left the user data of as many as 100 million customers worldwide at risk, and resulted in a month-long shutdown of Sony’s PSN and Qirocity services.

On Saturday, LulzSec revealed that it had hacked the website of Infragard Atlanta, a non-profit organization that serves as a public arm of the FBI. Through that breach, LulzSec obtained login data of Infragard member Karim Hijazi and infiltrated the network of his data security firm, Unveillance.

Hijazi asserts that members of LulzSec attempted to extort money from him in exchange for their silence. LulzSec says Hijazi tried to pay them to take down his competitors. Does it matter who’s telling the truth? Not to LulzSec it doesn’t.

Topics
Half of Google Chrome extensions may be collecting your personal data
What is Mastodon? Here’s why everyone’s talking about this Twitter alternative
Twitter’s SMS two-factor authentication is having issues. Here’s how to switch methods
How to use Mastodon: create your account, join servers, and more
The best laptops you can buy in 2022
This free service just hit a huge website security milestone
Best VPN services 2022: today’s top picks
This stunning DIY gaming PC dream machine is made of glass
Apple will pay $50M to settle the butterfly keyboard fiasco
This 15-inch Windows laptop is a great buy while it’s just $139
Get Samsung’s 49-inch Odyssey G9 Monitor for under $1,000 today
Why Starlink download speeds are experiencing double-digit dips
Hackers just stole LastPass data, but your passwords are safe