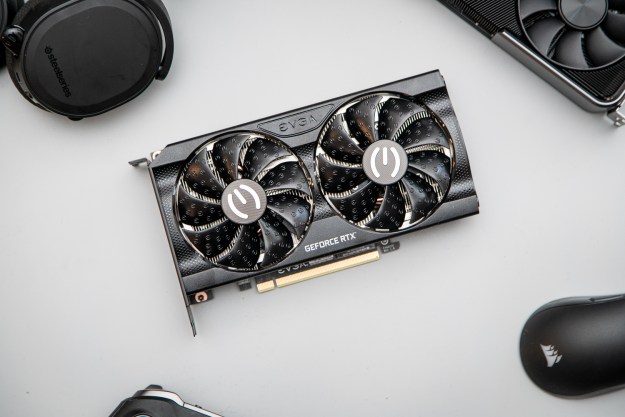 “The RTX 3050 is a return to budget GPUs for Nvidia, with solid performance that's bolstered by DLSS.”

2022 is the year budget GPUs are making a comeback — or at least it looks that way. I assumed this class of GPU was dead; Nvidia skipped the RTX 2050, after all, and prices on the best graphics cards continue to rise. The $249 RTX 3050 is a return to form, and it could be the go-to budget GPU this year.

I’ve had the chance to test the card, and although it holds up compared to the rest of Nvidia’s lineup and the competition from AMD, its features are what make the RTX 3050 stand apart. With rumors of increased supply and an attractive list price, the RTX 3050 may be an antidote to the GPU shortage that budget gamers have been waiting for.

Nvidia didn’t release a reference design for the RTX 3050, but the company still set a list price of $249. There is a swath of options from board partners, including graphics cards from EVGA, PNY, Colorful, and Asus. I got my hands on the EVGA RTX 3050 XC Black, which is available now for $249.

My card arrived with the incorrect BIOS, the one meant for the slightly more expensive EVGA RTX 3050 XC. This BIOS comes with a 68MHz boost to the clock speed. It’s a difference, but not more than 3% at the most extreme, and you can easily make it up by manually overclocking.

Like all graphics cards in 2022, you should expect the RTX 3050 to sell out immediately. The saving grace is that there are models available on launch day for list price. That’s cheaper than you can buy almost any graphics card right now, including options that are several years old.

On paper, the RTX 3050 is $50 more expensive than the recently released AMD RX 6500 XT. I haven’t had a chance to test AMD’s card yet, but the swath of benchmarks I’ve seen show that the RTX 3050 earns its higher price. The extra $50 buys you not only a more powerful GPU but also Nvidia Deep Learning Super Sampling (DLSS) and ray tracing that isn’t terrible.

If you can get an RTX 3050 for $250, you should — there isn’t a better value in today’s GPU market. That’s not the reality for most, though. Once the initial stock has made its way into the hands of scalpers, you can expect to pay double the list price. The RTX 3060, for example, sells for around $750 on the secondhand market.

For the RTX 3050, I anticipate secondhand prices around $500. If that’s the case, the RX 6500 XT will sell for around $100 to $150 less. Still, the RTX 3050 is a better value in my eyes. The performance of the RTX 3050 isn’t nearly as important as the fact that it’s a 30-series GPU. Even as nothing but a vessel for DLSS and ray tracing, it’s still more impressive than AMD’s competing graphics card.

The RTX 3050 is a true budget graphics card, and it comes with the specs to match. Sitting at the bottom of Nvidia’s current lineup, the card shaves a number of cores off of the RTX 3060, cuts the power draw by nearly half, and limits the amount of video memory. Unlike some recent GPU releases I’ve seen, though, the RTX 3050 doesn’t have problems based on the spec sheet.

For that, the card runs at a much lower wattage. 90W is all you need for the base spec, meaning you can get buy with a 250W power supply. Power limits continue to climb, and for the first time, we have an RTX 30-series graphics card that runs below 100W.

The main competitor to the RTX 3050 is AMD’s RX 6500 XT. I don’t have an RX 6500 XT to test right now — though, I will update this review with benchmarks once my unit arrives — but I still wanted to get an idea about how Nvidia’s latest budget attempt stacks up. I subbed in AMD’s RX 580. It’s an older GPU, but the benchmarks I’ve seen show that it performs around the level of an RX 6500 XT.

To eliminate the CPU, I ran my tests on the latest build of Windows 10 with a Ryzen 9 5950X and 32GB of memory. Here are my results at 1080p with the highest graphics preset:

Out of the suite, the RTX 3050 only managed above 60 frames per second (fps) in Battlefield V and Fortnite. It’s not much of a surprise, but the card couldn’t manage that coveted frame rate target in Red Dead Redemption 2 or Assassin’s Creed Valhalla. The RTX 3050 is a 1080p graphics card, but it’s not targeting the highest graphics preset.

Lower graphics presets were much more impressive — 64 fps in Assassin’s Creed Valhalla, and 134 fps in Battlefield V. In 2022, most graphic cards don’t make you choose a lower graphics preset at the proper resolution. The RTX 3050 does, but that’s not a bad thing. If anything, it showcases how little the highest preset does and how much performance you can gain by bumping down the settings.

There were problems outside of raw performance. The memory caused issues that don’t show up in average frame rates. In Battlefield V, my first few runs resulted in minimum frame rates in the single digits, manifesting as stutters as I played through. This is the smaller memory bus and 8GB of VRAM at play. In titles with a lot of high-resolution textures, there was some stuttering as the game loaded and the assets were pulled into memory.

Still, the RTX 3050 lands where it should. And compared to the competition that AMD is presenting right now, that’s great. I still think the RTX 3060 and RTX 3060 Ti hit the price/performance mark better than the RTX 3050; however, there’s a good chance the RTX 3050 will sell for significantly less than those cards on the secondhand market.

The RTX 3050 is a gaming graphics card, and you should pick up something more powerful if plan on using it primarily for 3D modeling or rendering. I still wanted to throw the card to a few content creation benchmarks to see how it stacks up, and although the results aren’t terrible, they aren’t great either.

Across the three Blender renders, the RTX 3050 was about 32% slower than the RTX 3060 and similarly slow compared to the RX 6600. It had a better showing in PugetBench for Premiere Pro, but as is the case with the RX 6600 and RTX 3060, this benchmark is leaning heavily on the CPU and system memory.

Compared to the RX 580, it’s no contest. The RTX 3050 can leverage CUDA for rendering, unlike the RX 6600 and RX 580, which leads to faster render times than OpenCL. I saw much higher render times with the RX 580, and in the case of the Koro render, I couldn’t even complete the test.

Make no mistake: The RTX 3050 is not a good graphics card for content creation. It can hold its own, but upgrading to a higher class of graphics card — either from AMD or Nvidia — will pay off exponentially.

For the first time in a while, Nvidia is standing apart not on raw performance but a list of features. DLSS is an essential feature for the most demanding games, and if nothing else, the RTX 3050 provides a way to use DLSS in games like Cyberpunk 2077 and Control. It also offers hardware-accelerated ray tracing, which works much better than the competition from AMD.

My results above were run with the same test bench at 1080p with the highest graphics preset. I included the RTX 3060 and RX 6600 for reference, not as competition for the RTX 3050. These two cards are in a class above the RTX 3050, and they unsurprisingly perform better across the board.

It’s a testament to how solid Nvidia’s ray tracing cores are, but really, you wouldn’t play either of the games above at their ray tracing frame rates. That’s where DLSS steps in. Even in the modest Balanced mode, the RTX 3050 maintained performance as if ray tracing was turned off. In the case of Control, the average frame rate was actually higher.

DLSS isn’t in every game, but the list of supported titles continues to grow. For a large chunk of major AAA releases, which would otherwise be unplayable on the RTX 3050, DLSS makes playing new games with all of the visual bells and whistles possible. It’s the best feature of the RTX 3050 — no contest.

It earns an extra point on the back of DLSS, which catapults the RTX 3050 from a good — but not great — GPU into a go-to option for gamers on an extreme budget. Prices are inflated now, but hopefully we’ll see plenty of $250 RTX 3050s by the end of the year — much unlike Nvidia’s recently released 12GB RTX 3080.

Not right now. Nvidia skipped this price tier with the previous generation, and AMD’s RX 6500 XT falls woefully short of the RTX 3050. The only alternatives are Nvidia’s more premium GPUs. Hopefully, by the end of 2022, you’ll be able to find something like an RTX 2070 or RTX 2060 Super for around the same price.

The RTX 3050 isn’t built for the future. It barely meets the mark for 1080p AAA gaming right now, and within a few years, you’ll struggle to hit sustainable frame rates at the highest graphics settings. If you are OK with bumping down your settings, or you primarily play less demanding games, it should last four to five years.

DLSS helps a lot, too. Assuming the list of DLSS games continues to grow, you’ll be able to squeeze performance out of the RTX 3050 for many years to come.