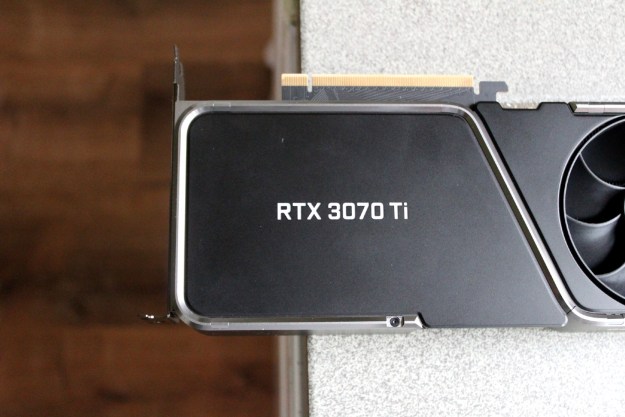 The Nvidia RTX 3070 was already one the most easily recommendable graphics card. It provided powerful 4K performance, yet came in at a reasonable $500. That’s downright cheap in today’s market, where graphics cards are selling for twice their retail price.

After releasing the overpriced RTX 3080 Ti last week, Nvidia is putting out its more modest RTX 3070 Ti. It only costs $100 more than the 3070, and fills the market with more appropriately priced options that provide all the performance PC gamers will need.

Does that make the RTX 3070 Ti the best graphics card you can buy or is it as unnecessary as the RTX 3080 Ti?

Of course, there’s far more to these cards than just core count. The RTX 3070 Ti has faster GDDR6X memory, with a greatly expanded bandwidth, now up to 608GBps (gigabytes per second). The bus size remains the same, however, leaving the wider 320-bit to the RTX 3080.

The faster clock speeds of the RTX 3070 Ti should help it out in game performance as well. It’s noteworthy as frequency tends to be reduced as more cores are added to a card. The RTX 3080 Ti, for example, has a lower clock speed than the standard RTX 3080.

Of course, the RTX 3070 Ti also features slightly more Tensor and RT cores to help with both ray tracing and DLSS performance. It’s only a marginal improvement, though, leaving a wider gap between the 3070 Ti and the 3080.

I tested the reference unit, the RTX 3070 Ti Founders Edition, manufactured by Nvidia itself. Like other cards in the RTX 30-series, the 3070 Ti features a beautiful dark silver shroud, accented by chamfered edges and a black aluminum backplate. One side has the intake fan and the other has the exhaust, creating the same “push-pull” system featured on the other RTX 30-series cards.

Like the other cards in the series, they must be routed through Nvidia’s included adapter to the 12-pin connector on the card. It’s been mentioned ad nauseum, but the requirement of an adapter makes for a messy look in your rig.

The margin was, of course, closer in a CPU-bound game like Assassin’s Creed Valhalla. There, we’re only talking about a couple of frames per second (fps). And unfortunately, the RTX 3070 Ti can’t quite play the game at max settings in 4K. The 68 fps the game averaged in 1440p was a smoother, more enjoyable experience. That was also true of Cyberpunk 2077. Even at Medium settings in , the RTX 3070 Ti only averaged 48 fps. If you want to turn on the ray tracing effects (which you really should), that’s one more reason to not even bother playing in .

We also tested the RTX 3070 in a different system, the Dell XPS 8940. It’s a smaller desktop with more limited cooling and a nonstock GPU, so it wasn’t included in the standardized test results above. Based on the numbers provided by Nvidia, it’s around 3% slower than in our XPS system, which I considered in my evaluation and comparison.

In all my testing, the card never got too loud or rose above the maximum 83 degrees Celsius. In my Time Spy runs, the GPU temperature never peaked over 76 degrees.

I also tested some creative performance. First, I tested the RTX 3070 Ti in the Blender benchmark, which lets you choose the component that will render the image. Lots of applications use a combination of the CPU and GPU, which makes the Blender benchmark great for testing the strength of the RTX 3070 Ti on its own. I ran the first three tests in the benchmark, and I saw between 11% and 22% slower render times versus the RTX 3080.

Difference in graphics performance in PugetBench Adobe Premiere fell into a similar gap at 11%. This test measures how much the GPU will speed up important video editing tasks such as 4K video playback and exporting.

In any other year, it’d be hard to make the case for an RTX 3070 Ti. The 3070 and 3080 came out less than a year ago, and were already great graphics cards, providing excellent 4K gaming at a decent value.

The global chip shortage and proliferation of crypto mining has made the existence of the RTX 3070 Ti make a bit more sense. It slots in between the 3070 and 3080 both in terms of performance and price. And unlike the RTX 3080 Ti, Nvidia didn’t elevate its price just because it could.

The RTX 3070 and RTX 3080 are both good alternatives from Nvidia. The 3070 Ti is wedged right in between the two, and provides equally good performance for the price. On the AMD side of things, the closest competitor is the $649 Radeon RX 6800 XT.

The RTX 3070 Ti should keep your rig up-to-date for upward of 10 years. It supports the latest technology and screen resolutions, and should ensure that PC games that come out five years from now can still be played.

If you can find it at (or near) retail price, buy it.

Topics
Best HP laptop deals: HP Envy, HP Spectre x360, and more
Tested: Is Discord really slowing down Nvidia GPUs?
Best 17-inch Laptop Deals: Get a large laptop for $330
Best gaming laptop deals: Save on Alienware, Asus and more
The best PC power supply for 2023
ChatGPT has a new way to detect its own plagiarism
Samsung Galaxy Book 3 Ultra vs. MacBook Pro 16-inch
The Galaxy Book 3 Ultra is Samsung’s most powerful laptop ever
Nvidia may have another monster GPU in the works, and the price could be outrageous
AMD’s Ryzen 9 7950X3D pricing keeps the pressure on Intel
What is ChatGPT Plus? Everything we know about the premium tier
ChatGPT Plus to bring priority access during peak times — at a hefty price
Usually $3,879, this Lenovo laptop is down to $1,479 today