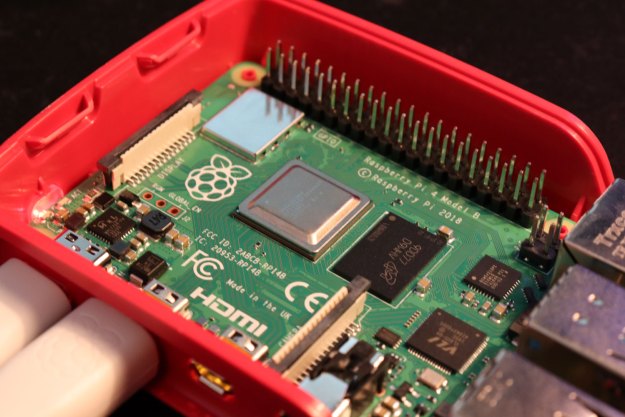 “The Raspberry Pi 4 is the most capable Pi ever made, and an awesome affordable PC.”

The first computer I ever saw, touched — and likely tasted, considering my tender age — was the BBC Micro. It was an enormous computing system by today’s standards, but it was a transformative piece of equipment nonetheless. Its focus on homebrew hacking inspired the original Raspberry Pi micro computer, and those roots can be felt in the newest Pi fresh out the oven: The Rapsberry Pi 4 Model B.

This little machine is faster, more capable, and comes with a greater selection of features and oodles of optional extras. That includes up to 4GB of RAM — four times more than any Pi that came before. You can buy one now all by itself, as the original Pi was sold, or as part of the Desktop Kit, which contains everything you need to build a pint-sized desktop computer. It even comes with a mouse, keyboard, and beginner’s guide.

Getting started couldn’t be easier

One of the major reasons people love the Raspberry Pi and by extension, its latest iteration, is how affordable and customizable it is. If you have a project in mind, and already know your way around the Linux terminal, then you’ll be well suited to the standalone Pi 4.

The Desktop Kit is designed with a different crowd in mind. It’s built for the layman like myself, who has only dabbled with Linux, and would be scared by the idea of sourcing an unbranded USB-C cablel. The kit comes with everything you need. That includes a beginner’s guide that is very well illustrated. It even shows you how to plug the HDMI cable(s) in.

The Pi 4 takes mere minutes to get going and thanks to the included keyboard and mouse, you aren’t left looking for accessories to control it. You just plug in everything as instructed, hook it up to a display, and before you know it, you’re looking at a welcoming looking desktop, complete with icons that will be familiar to any semi-experienced Windows or MacOS user. Networking options include out of the box Wi-Fi — no dongle required — or you can take advantage of the Gigabit Ethernet port.

The software setup takes a little longer, but the on-screen wizard will walk you through everything you need to know or impart before you’re dropped right into the desktop environment and given free rein to do whatever it is you want to do.

Figuring out what you want to do

This is the moment in the sandbox RPG where you try to figure out why it is you’re playing the game in the first place. If you wanted a desktop replacement, this may be the end of your adventures in fiddling with the Pi 4, as for all intents and purposes it functions very well.

You can watch YouTube with only a little chop at 1080p (or beyond, thanks to the new 4K support, although it’s not smooth by any means), write or edit text and other documents using the already-installed LibreOffice, or browse social media and other sites using the Chromium browser.

It’s not a super-snappy experience if you’re used to a regular desktop or midrange laptop, but it’s far from slow and there are a host of recommended programs you can easily install by heading through the Raspbian menu if you need to expand your software options. The beginner’s guide also gives you plenty of documentation to walk you through using any of these integrated tools and the wider Pi community has heaps of resources for anything that’s not covered.

Thanks to the onboard graphics chip in the Pi 4, this system is more powerful than ever (detailed benchmarks from the author of the beginner’s guide, here) and it’s more than capable of playing classic games. You’ll need to jump through a few hoops and learn how to compile, but I had Doom running within an hour of fiddling around with online steps and tutorials.

But if you’re interested in using the Pi4 to learn and create your own scripts and software, this is where your adventure really beings. The default Raspbian Linux installation comes complete with the Scratch 2 editor, so you can dive right in with a visual programming language to learn the basics of coding in an easy-to-understand manner. The beginner’s guide also has pages upon pages of tutorials and tips to walk you through creating your own scripts from saying Hello World for the first time, right through to creating basic games.

When you’ve moved beyond Scratch or if you just want to dive right in with text-based coding, the Thonny Python IDE already installed and ready to get to grips with. As you might expect at this point, the beginner’s guide has everything you need to walk you through the process.

This is where the Pi 4 really shines, because it not only gives you an incredibly affordable entry-point to this sort of educational environment, but it opens up whole worlds of possibilities. Once you’ve learned the ropes, you can pick a project and dive as deep into it as you want.

My particular project of choice during my time with the Pi 4, was trying to address one of its most publicized problems: it gets hot. A downside of the additional performance of the Raspberry Pi 4 over its predecessors, and to a lesser extent, the more recent of those over the earlier Pis, is that it makes the system far hotter.

The Raspberry Pi 4 has no cooling system of its own and when in the compact confines of its little case, it can get toasty. The Raspberry Pi foundation has done what many modern designers do, and implemented thermal throttling so that the SoC never gets too hot, but if you pass 80 degrees, you can see a big dip in performance. I saw a drop from the 1.5GHz standard boost clock to less than 1GHz in some cases.

The Pi has a few commands that can tell you the temperature and the system’s clock speed at any point in time, but that’s no good for monitoring, so I wrote a little script to spit out those readings once a second. There are many monitoring scripts out there, but I decided to write my own.

I ran the Sysbench benchmark to run the SoC hard using all four threads and sure enough, after a couple of runs, the clock speed dropped by almost 50 percent. That just won’t do. To fix it, I added a spare heatsink I had from a past project to the Pi’s SoC (and later memory module). My reward was more thermal headroom. Hour-long Doom sessions no longer pushed it to its toasty limits.

One takeaway is that the Pi 4 could do with active cooling if you plan to use it in high-performance mode for extended periods. Normally, a problem like this might seem unacceptable. The Pi 4’s excuse is its low price and wide range of customization.

I found something I wanted to work on with this little project, learned to write a little code, and conjured up a hodgepodge solution of what I had lying around at home. The Pi 4 wouldn’t cease to function without this help, but it would be a little less useful for what I wanted to do. The same might be said of many other possible uses. You could use the Pi 4 as a media server, a home security hub, or the brains of a homemade robot. The Pi 4 isn’t perfect for such jobs out of the box. But that’s the point.

The best Pi yet

The Raspberry Pi 4 is different for everyone. For some, it’s a low-cost desktop replacement that you can take with you wherever you go. For others, the Raspberry Pi is a tinkering toy. It’s an educational tool. A homebrew hacker’s hobby horse. It’s an in-flight entertainment system, an electric skateboard, or a great retro console. The Raspberry Pi 4 is whatever you make of it.

You don’t need the Pi 4 to do any of these, but it’s certainly the most capable of the ones offered by the Pi Foundation. It can support dual 4K monitors, has Gigabit Ethernet networking alongside its Wi-Fi and Bluetooth support, and has a pair of USB 3.0 ports for faster and more bountiful connectivity than ever before.

It gets hot and there is some software that isn’t yet configured to work with the Pi 4, but that’s nothing that won’t be solved with time and a few heatsinks. The real strength of the Pi 4 isn’t what it can do out of the box, it’s what you can make of it.

The Raspberry Pi 4 is an awesome little system that opens up a world of possibilities for those who use it. The Desktop Kit serves as a fantastic starting point for anyone looking to get to grips with programming and from there the sky really is the limit, because there’s little about the hardware that will hold you back.

The Raspberry Pi 4 Model B is the most capable and versatile of any Pi that’s come before and the Desktop Kit makes its entire setup as easy as possible. You have to pay quite a lot more for the whole kit than you do for the standalone Pi, but if you’re at all concerned about where to get started with a miniature computer like this, it’s a great jumping off point.

There are plenty. The Pi 4 Model B is the most powerful of the lot, but there are reams of other options. If you don’t need all that power, you can always buy first, second, or third-generation Raspberry Pis. Or there’s the Pi Zero, which is super barebones, but just $5. Outside of the Pi Foundation, there’s also the BBC micro:bit, a single board system produced by the company behind the original BBC Micro, or the Onion Omega2Plus, which is smaller than just about anything else out there.

Years, if you treat it right. The Pi 4 will undoubtedly be replaced by a more capable version in years to come, but unless you’re pushing the boundaries of what’s capable on a mini-PC, you don’t need much more than this. The Pi 4 Model B is already a somewhat capable desktop replacement and can handle any project you throw at it. Improving its cooling will help prolong the life of its components, though.

If you’re looking for a homebrew computing project, this Raspberry Pi 4 is a great buy. It’s also a decent desktop replacement akin to the Mac Mini, only far smaller and far less expensive. It takes some effort to get things working as you want them, but then that’s half the fun of it.

If you know what you’re doing already, just buy a standalone Pi, but if you want a little hand holding while you get to grips with your new mini-PC, the Desktop kit is a great place to start.

Topics
The best web browsers for 2023
If you use PayPal, your personal data may have been compromised
How to fix audio issues in macOS
The best password managers for 2023
What is ChatGPT Plus? Everything we know about the premium tier
ChatGPT Plus to bring priority access during peak times — at a hefty price
Usually $3,879, this Lenovo laptop is down to $1,479 today
Get this Asus gaming laptop with an RTX 3060 while it’s $400 off
All of Samsung’s videos from today’s Galaxy Unpacked event
Best 2-in-1 laptop deals: Save on Dell, Lenovo, HP and more
The best USB-C cables for 2023
Apple just found a bizarre way to make virtual keyboards less annoying
Forget the MacBook Pro 16: Dell XPS 15 is $400 off right now