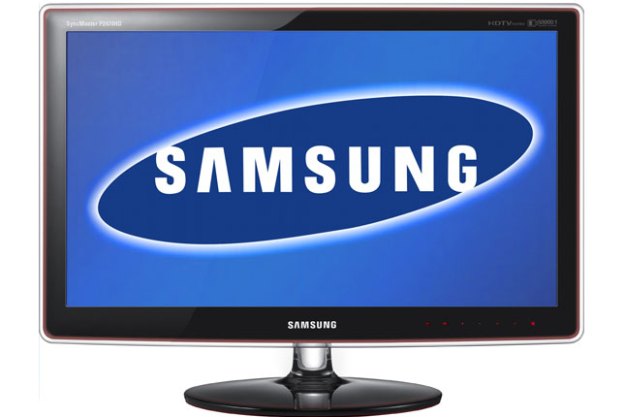 “Samsung’s hybrid cross between a TV and computer monitor borrows many of the best features of both, making an ideal shared-space solution.”

Television or computer display? You decide. Samsung’s SyncMaster P2770HD takes advantage of the blurring line between supersized monitors and miniature TVs by turning one 27-inch, 1080p LCD panel into both. With the inputs and specs of a PC display and the tuner and styling of a television, we found it managed to borrow some of the best attributes of both, even if a few of our favorite frills – like swivel stands, USB inputs, and picture-in-picture – went missing in the process.

Because televisions in this size would typically come in 720p resolution, the panel Samsung chose for the SyncMaster 2770HD looks more like it came from the monitor side of the supply chain than the television side. It offers 1080p resolution, 16.7 million display colors, brightness of 300 cd/m2, and 5ms response times, along with a dynamic contrast ratio of 50,000:1 (or 1,000:1 without the number games that come with the term “dynamic”). Oddly enough, the $50 cheaper 2700H, which has no TV capabilities, has a panel with far superior specs, which we would recommend investigating if you love the style but don’t need the television functionality.

As a TV, it comes with all the trappings you would normally expect, including a candy bar-sized remote indistinguishable from the ones that come with Samsung’s larger TVs, built-in 3-watt stereo speakers, and of course, that all-important HD tuner for picking up over-the-air signals and basic cable. When you go to connect a PC or Blu-ray player, you’ll have your choice of inputs including one VGA, one DVI, one HDMI, as well as component and composite video. Since a PC won’t send audio signals over the HDMI connection, there’s a separate stereo jack for feeding in PC audio, as well as an S/PDIF digital input. A standard coax connection provides room for an antenna, and you’ll find a headphone jack buried on the back as well. You’ll also spot a USB jack, but it’s for upgrading firmware only.

Unfortunately, the P2770HD provides no more than one of any video connection, and there’s no side panel with easy access to ports – like the headphone jack that definitely belongs there. You’ll also miss some of the more convenient features of a high-end desktop monitor, like a built-in USB hub, and a stand with any sort of height adjustment.

Considering most manufacturers are content to tack a few strips of gloss black around their LCDs and call it a day, Samsung’s P2770HD very nearly stands in a class on its own.

The display shrinks the classy “Touch of Color” design found on many of Samsung’s late-model HDTVs to the desktop, where it’s even easier to appreciate the subtle intricacies that make this design stand out. While the inside edges of the bezel appear almost black, the darkness dilutes toward the outside into a translucent ruby red, then to a thin rim of totally clear acrylic. The same effect fans out from its oval-shaped stand and up into its most notable aesthetic feature: a swoopy, glass-like neck that it almost seems to have splashed out of the base in liquid form and frozen in place. Besides the company and model name screened on in subtle white, there’s not much to distract from the lines and color.

If there’s one drawback to this arrangement, it’s the lack of real adjustment that comes without a heavy-duty monitor stand. You can tilt the monitor up and down, but that’s it: No height adjustment, no swiveling. The tilting action also has a soggy feel that doesn’t exactly inspire confidence. The first time we fiddled with it, we almost expected to hear a snap and make a sad call to Samsung.

Tapping the bottom right of the screen once brings out a glowing red strip of touch controls, but the comfortable remote all but obviates the need for it. Pressing “menu” on the remote brings up all the necessary adjustment parameters in high-quality onscreen display carried down from Samsung’s televisions. Unfortunately, Samsung inexplicably bars many of the most granular controls on the DVI and VGA inputs, including vitals like backlight and the entire advanced settings menu. Instead, you’ll get three image adjustment presets: entertainment, Internet, text and dynamic contrast, along with one custom setting that only lets you fiddle with brightness contrast, and color tone. Audio settings are significantly more robust, offering options as specific as a five-band equalizer, SRS TruSound HD, and even automatic volume control to compensate between channels.

Of course, you’ll also find a full array of TV options, including the ability to set the tuner for over-the-air or cable channels, automatically scan for channels, and even flag channels as favorites to pull them up in a split second via the “favorite channels” button on the remote. Make no mistake, Samsung has endowed the P2770HD with many of the same features and creature comforts you would expect to find on a television in the same price range. Perhaps the only real one missing: picture-in-picture, which would be convenient to take advantage of the tuner while still using the desktop.

For any display designed to pull two-in-one duty, 27 inches of screen turns out to be practical sweet spot. Go much bigger, and most desktop monitors require resolution above 1080p to still look sharp up close, which boosts up price and ends up being overkill for TV. Go much smaller, and the display loses much of its appeal as TV. The SyncMaster 2770HD comfortably stretches 1080p resolution about as large as it can practically go on a desktop display. While dot pitch (how tightly packed the pixels are) is relatively loose at this size, we had no issues with text or images looking overly stretched or pixelated on the 2770HD, even when using it as a monitor from about two feet away.

Text, images and movies all looked superb on the P2770HD, with more vibrant colors and significantly brighter whites than many of the displays we’ve reviewed recently, like Acer’s P244W. Although 5ms refresh times are standard for this type of display, we found it perfectly adequate for fast motion in video games and action movies, like the high-def trailer for The Expendables. Black levels aren’t the best we’ve ever seen, but neither are they particularly bad or notable.

As a TV, high-def 1080i signals look razor sharp on the P2770HD, and it even manages to wrestle standard-def signals into highly watchable material, although we have to give some credit to its relatively small size for TV, which helps hide blockiness and artifacts where larger TVs only serve to blow them up even larger. The sizable array of of picture tweaking options that open up with TV as a source certainly help adjust the picture to taste.

As we mentioned, the 27-inch LCD panel in the P2770HD has more in common with most desktop monitors than televisions, which means viewing angle suffers slightly. While totally on par for a monitor, you might have trouble with the display in a living room setting where most viewers don’t find themselves seated dead on in front of the monitor. The lack of a swivel base – which would make it easier to adjust the monitor to work in more than one seating position – doesn’t help the situation.

Perhaps a larger issue: The built-in speakers are barely suitable for watching TV seated five feet away at a desk in an otherwise quiet room. We needed to crank them to full volume for most situations, and more distance from the TV or ambient noise easily washes out the sound. A $50 pair of computer speakers would remedy the situation, but also ruin the aesthetic and all-in-one appeal of the display.

For a dorm room, small apartment, kitchen or other living situation where a TV and computer monitor can easily share the same screen, Samsung’s P2770HD makes a workable go of combining the two. While the lack of some common television frills like a swiveling stand and picture in picture would be welcome, superb image quality, a powerful menu system and an extremely attractive chassis all speak in favor of Samsung’s all-in-one Wunderkind. You’ll certainly pay a small premium over a tunerless 27-inch monitor, but the savings gained from combining two devices into one should justify the expense if you can truly make use of it.