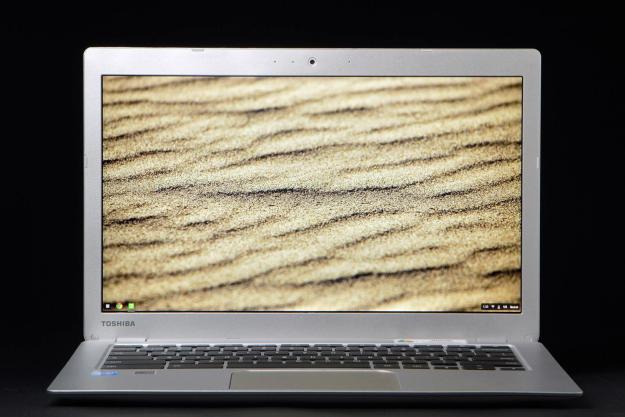 “Don't try to do too much on this lovely-looking Chromebook and you’ll be happy.”

Toshiba was late to the Chromebook party, but when it joined it did so with enthusiasm. The company showed the world’s first 13-inch model at CES 2014, a move that every other company soon copied. To keep ahead of the pack the company quickly released its Chromebook 2, which adds a 1080p display to the mix.

That’s a great upgrade, because many competitors still get by with 1366 x 768 resolution. As you might expect, though, the screen isn’t cheap. Toshiba sells the Chromebook 2 with a Celeron processor and four gigabytes of RAM for $300 at most outlets, which is towards the top of the Chromebook price spectrum. We recently tested a pair of similar Lenovo systems that tried to push the limits of Chrome OS features and failed. Does Toshiba fare better?

We’re fans of the Chromebook 2’s chassis, a textured, silver hunk of plastic that looks as good on a desk as it does under one’s arm. The system itself weighs a bit more than a Macbook Air at right around 3 pounds. It’s not heavy to the point of annoyance, but it’s not the most svelte laptop you can get your hands on. At only 12.5 by 8.5 inches it’s great for messenger bags of all sizes.

The laptop is made of textured plastic that looks as good on a desk as it does under one’s arm.

We had no issues whatsoever using the Chromebook’s keyboard, whose keys are decidedly Mac-like in their design. The four-inch-wide touchpad didn’t present any problems, either. It works just as a touchpad should, proving responsive to all of our poking and multi-finger tapping. That said, Chrome OS doesn’t have as many multi-touch gestures as Windows or OS X, so you can’t accomplish as much with the touchpad alone.

What we didn’t like is almost a bit silly to mention, but we feel obligated. The laptop’s top half lines up perfectly with its bottom half, and there’s no lip cut out in the top half to give you an easy way to open the laptop up and start working. If you’re a nail-biter (like this reviewer), or are just a bit fumbly (same), you’re not going to be able to open this laptop up as quickly or as easily as others you might have used.

The laptops sports a good selecton of connectivity for a Chromebook: one USB 2.0 and one USB 3.0 port, an HDMI port, an SD card reader. That gives the option to connect the laptop to an external monitor if you so choose, which we like.

We also like that you can augment its storage with an SD card if you happen to find yourself running out of room on the laptop’s 16GB solid-state drive (and have forgotten about that 100GB cloud storage offer; 1TB, if you buy the Chromebook 2 before the end of 2014).

Other goodies to be had within Toshiba’s laptop include dual-stream 802.11ac Wi-Fi and Bluetooth 4.0.

Toshiba outfits its Chromebook 2 with an Intel Celeron N2840 chip that runs at a base clock of 2.16GHz and can boost up to 2.58GHz when necessary. Toshiba also packs an eye-opening four gigabytes of DDR3 1600MHz memory. That’s far more than what you’ll find in competing Chromebooks like Lenovo’s N20p and Samsung’s Chromebook 2.

Sounds fast, right? Alas, that’s not the case. The Chromebook 2 can be a little laggy when you’re using Chrome (the default and only browser). Chrome’s Omnibar was sluggish at times, pages occasionally took much longer to load than on a desktop or mid-range Windows notebook, and YouTube videos playing in the background would stutter when we were typing in Web addresses on a new tab. Google Drive was easy to use for editing documents and spreadsheets, but it felt a little laggy when loading a list of files or a new document.

We had a few extensions installed during our use, including the possibly painful Adblock Plus. Still, the laptop seemed to perform better in its barebones guest mode. We wouldn’t expect most Chrome users to run a plain browser and we don’t think they should be hamstrung to an extension-free experience.

The Chromebook 2 registered an overall score of 1,568 in the Futuremark Peacekeeper web browsing benchmark. That’s a bit higher than the performance of Lenovo’s Yoga 11e or N20p, but short of Samsung’s Chromebook 2 and far behind our Chromebook champion, Acer’s C720P-2600 (and it’s 2,909 score). The Acer is up to $100 less (without a touchscreen panel), which is sure to make you wonder what you’re really paying for.

When we tried playing the 3D game From Dust the Toshiba immediately threw up the white flag. Not happening. We couldn’t even watch the opening cutscene without terrible stuttering that made the game pointless.

One answer could be the Toshiba Chromebook 2’s 1080p IPS display. The resolution gives you plenty of space to work with, though text can appear a smidge small. Thankfully, scaling the entire UI is as easy as hitting a keyboard command in case you’d rather trade a little fuzziness for a more readable size.

The speakers sound better than a typical laptop, but it’s still a laptop.

The IPS panel does a good job of displaying dark details. When we fired up the display test images over at lagom.nl we were able to see a difference between a grayscale value of 6 or so against an all-black background. That’s pretty good for a laptop, though a stand-alone IPS monitor will usually do better.

The Toshiba performed much better on the white side of the test, reaching a value of 253 (out of 255) before we were unable to tell the difference between the almost-white box and the all-white background. The screen’s viewing angles were good. Contrast drops off a bit as you move horizontally and vertically, but colors stay consistent.

Audio quality is strong give the system’s size, though still lacking the “thub-wub” oomph that you’d want for songs with a super-low beat. In our super-scientific Nine Inch Nails test the Chromebook 2 didn’t accurately represent songs’ deepest tones. We had no problem whatsoever watching drums-filled space battle scenes from Battlestar Galactica, though, which seemed superior to what most small notebooks can manage.

Portable for a Chromebook

We measured the Chromebook 2’s battery life at 6 hours and 22 minutes on our Peacekeeper battery test. The test itself is fairly simple. It loops the Peacekeeper benchmark until the laptop gives out, then reports how long said device managed to run for. We didn’t alter our laptop at all when we pulled its power cord—measuring its battery life with a half-bright screen and both Wi-Fi and Bluetooth turned on.

That’s a pretty good amount of battery life for a Chromebook. It’s nearly an hour and a half longer what what we got with Acer’s C720P-2600, though not as much as the seven hours Lenovo’s N20p Chromebook managed. Still, it’s on the higher side of Chromebooks we’ve tested. It also compares well to inexpensive Window notebooks.

The Chromebook 2 ate up approximately 14.5 watts at idle and 17.5 watts while we we ran our Peacekeeper benchmark. Both figures are actually a bit high, making the battery life each more impressive.

Toshiba’s Chromebook 2 is a handy laptop to keep on one’s nightstand or coffee table. It isn’t the laptop we’d turn to for more strenuous tasks, like watching a 1080p movie while shopping across 10 different tabs, but it does a decent enough job given what it has to work with.

That said, you can buy a faster Chromebook for less than the cost of Toshiba’s Chromebook 2. Much less, if you don’t care about having a touchscreen to go with it. You’ll lose a little screen size if you opt for Acer’s C720P-2600, but you double performance.

Price is a problem, too. We think this laptop’s so-so performance will make you ask yourself why you just plunked down north of $300 for a laptop that can feel choppy after just a few browser extensions have been added. There is a less expensive model, but it has the same processor, less RAM and a 1366 x 768 screen. You get what you pay for.

This system could make sense for consumers who want Chrome OS but also want a decent display, as very few alternatives offer the same. It’s also quite portable. We just wish it had performance to match its features.