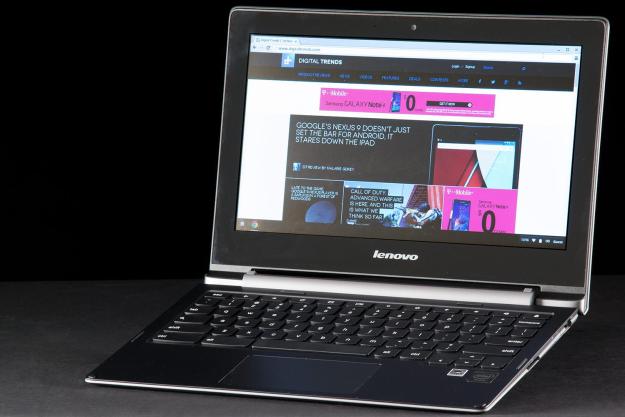 “Lenovo’s N20p is portable and functional, but it doesn’t offer the performance we expect from a modern Chromebook.”

Lenovo was not among the first computer makers to embrace Google’s Chrome OS. The company chose to test the waters tentatively with an education model, rather than dive in with a full consumer release. Now that Chromebooks have caught on, the company has decided not to just hop on the bandwagon, but to fight for the reigns as well. Today, Lenovo offers a handful of Chromebooks, which is a huge sign of commitment.

The $330 Lenovo N20p is the least expensive Chromebook that the company currently offers. While the price may seem low, it’s a lot for a Chromebook. The most affordable alternative, for example, is Acer’s Chromebook 11, which starts at $200. Lenovo is often very competitive on price, but in this case, it’s aiming for the more expensive end of the market.

Selling something at a premium means that premium features must be added, of course, so the N20p packs impressive hardware. The processor inside is an Intel Celeron chip with a base clock of 2.16GHz, the display supports 10-point multi-touch, and the hinge rotates 300 degrees to enable touchscreen-only use. The N20p also includes a 16GB SSD, and 2GB of memory.

Can these features justify spending up to $130 more than you would on a competing Chromebook? Let’s have a look.

Lenovo spent its money on the N20p’s hardware. All of it. That means the exterior is rather plain. There’s nothing wrong with it exactly, but the simple gray exterior, and matte black interior aren’t what we’d call inviting. They’re quite the opposite, in fact. This system feels buttoned-down, professional, and reserved. We prefer cheap-and-cheerful laptops with bright exteriors.

This Lenovo lasts seven hours and one minute in the Peacekeeper Web browsing test. That’s an excellent result.

At least this Chromebook feels sturdy. Plastic is the material of choice, and we’d be lying if we said it felt expensive to the touch. However, the laptop’s small screen size, and light weight minimizes the need for heavy construction. Picking up the N20p from an edge doesn’t cause groans or snaps. Panel flex, while present if you go looking for it, isn’t obvious in normal use.

The rotating hinge is particularly pleasant. Lenovo has exerted a lot of effort to perfect this idea in more expensive laptops, so it feels downright luxurious in a Chromebook. You’ll never see the display wobble during use, and the laptop opens with a feeling of heft and purpose. However, opening the system with one hand is almost impossible.

Along the flanks, there are two USB ports, along with an HDMI-out, a headphone/microphone jack, and an SD card reader. One of the USB connectors is of the 3.0 variety. This doesn’t sound like much, but it’s enough to stand out from the crowd. Some competitors don’t offer USB 3.0 at all. Bluetooth 4.0, and 802.11ac Wi-Fi are included as well.

Not your typical Lenovo keyboard

Lenovo’s systems are known for having a particular style of keyboard that have some unusual layout attributes, but they’re only designed for use with Windows PCs. Therefore, a different keyboard is found here. As a result, the N20p may feel unfamiliar to people who have spent a significant amount of time using Lenovo’s laptops.

That’s not to say it’s bad, however. In fact, quite the opposite is the case here. Fast touch-typing is surprisingly easy to pull off due to the keyboard’s spacious layout, and solid key feel. Our only complaint lies with the Backspace key, which is small, and easy to miss.

Above the alphanumeric keys are Google’s unique row of function keys which are designed to work hand-in-hand with Chrome OS. These work well, though a couple of keys have icons that will be difficult for new users to decipher.

The browser-centric forward/back keys are particularly handy, allowing us to quickly flip back and forth between recently visited pages without requiring us to use the touch-pad.

Keyboard back-lighting is not available on this notebook, but to be fair, we haven’t seen this on any Chromebooks that we’ve come across.

While the N20p has the hardware edge in several areas, it still uses the same lackluster 1,366 x 768 resolution found on most Chromebooks. Viewing angles are narrow, and color temperature is far too cold. Video content looks lifeless relative to a high-quality display, and far less sharp than it would on an iPad or a 1080p Android tablet. This is an area where inexpensive laptops remain way behind the mobile competition.

Performance is where this notebook really stumbles.

The display supports 10-point multi-touch, and is every bit as responsive as the touch-pad. Gestures work smoothly, and interacting with small interface elements, like tabs in the Chrome browser, is quite easy. Other features don’t work as well, however. The virtual keyboard is extremely sluggish, and pinch-to-zoom only seems to activate half the time. Google still has work to do in this area, and the operating system’s problems make the touchscreen feel more like a gimmick than a feature that users can rely on.

Audio quality is decent given the notebook’s size. Maximum volume is plenty loud, and distortion usually isn’t an issue. However, we did note some odd chassis vibrations when we listened to tracks that contained deep bass. External speakers will be a definite upgrade, but the built-in audio will do in a pinch.

Not the powerhouse you’d expect

A look at the N20p’s specs sheet makes it seem like a powerhouse. Its standard Intel Celeron N2830 CPU is a dual-core processor with a base clock of 2.16GHz, and a “burst” speed of up to 2.4GHz. That seems way faster than the Acer C720P, our reigning Chromebook performance champion, which we reviewed with a 1.4GHz Celeron that didn’t include Turbo Boost.

Specs can be deceiving, however, and it turns out that the N20p is far slower than the Acer. It produced a Futuremark Peacekeeper Web browsing test score of only 1,365. That pales in comparison to the Acer’s result of 2,909. You’re reading that right. The N20p’s score is less than half of the supposedly slower Acer.

The problem is the architecture. Acer’s Chromebook uses a Celeron chip that’s built on the same Haswell design which underpins Intel’s Core i3, i5, and i7 lines. The Celeron in this Lenovo, however, is built on the much slower Bay Trail architecture that, in quad-core form, is often sold as an Intel Atom.

We noticed the difference in everyday use. Chrome OS is smooth as silk on the Acer 720P, but hesitates at times on the N20p. Switching from an open tab to a Google Drive document, for example, often results in a delay as the browser renders what’s to be displayed. 720p video streams play smoothly, but switching between tabs can cause audio stuttering, and momentary lockups.

None of this is a deal breaker, and for the most part, the notebook feels fast enough. However, it doesn’t have much grunt to spare. That means playing most games is out of the question. Angry Birds plays well, but more complex 2D titles like Bastion, a popular action-RPG, work in starts and stops.

As for 3D games, you can forget about it. Only the most rudimentary titles will play well. From Dust, a game we routinely use to test Chromebooks, was so slow that we couldn’t get past the introduction.

While the slow Celeron chip in the N20p hurts its performance, it offers some attractive traits for travelers. The N20p weighs in at just 2.8 pounds despite its relatively large battery, and offers a good selection of ports as well. Most owners will find the system’s heft to be unnoticeable once it’s stashed in a backpack or messenger bag. It’ll even fit in a large purse.

Our battery life test found that this Lenovo lasts seven hours and one minute in the Peacekeeper Web browsing test. That’s an excellent result which beats Samsung’s Chromebook 2 by about 40 minutes, and absolutely stomps comparable Windows notebooks.

Power draw is low, as expected. We recorded only seven watts of consumption at idle, and no more than 11 watts at full load. These figures are so low, in fact, that the N20p is able to get away with passive cooling. Yet, it never feels more than slightly warm to the touch.

The price and specifications of the N20p position it as a top-tier Chromebook, but it unfortunately fails to stand out from the crowd. Its touchscreen and folding hinge are unique, but pointless given that Chrome OS is not designed with touch in mind.

Performance is where this notebook really stumbles. The system can feel sluggish when rendering a Google document, or when switching between tabs that display dynamic content like streaming video. Games are mostly out of the question, as well. Such flaws could be excused if the N20p were affordable, but it’s actually more expensive than the competition. Acer’s far quicker 720P costs over $100 less!

There is one area where this Lenovo excels, and that’s portability. The N20p offers solid battery life in a slim, lightweight package. Yet, it also has a good keyboard, and a responsive touch-pad. Frequent travelers will appreciate these traits, and may want to consider this system over cheaper alternatives with smaller batteries.

As the market for Chromebooks has grown, it has also become more competitive. Simply showing up isn’t good enough, as consumers have come to expect top-notch performance at a very affordable price. Lenovo’s N20p, distracted by touch, fails to offer that combination. Nevertheless, its positive traits will win it some fans.

Samsung’s slidable PC display makes foldables seem archaic
Intel Unison is yet another attempt to make PCs and phones work together
Nreal’s Air AR glasses head to the U.S., ready to rock with iPhones
Best gaming monitor deals for October 2022
Apple has a bunch of new products coming, but not this year
Lenovo is practically giving away this 2-in-1 laptop today
Lenovo Legion i7 gaming PCs and laptops both got massive discounts
Lenovo’s ThinkVision ultrawide curved monitor is 40% off today
When is the best time to post on Facebook?
The classic Macintosh was just redesigned by AI — and it’s beautiful
How to use clipboard history in Windows
How to add external games to your Steam library
Three ultra-rare RTX 4090 GPUs are hidden in Cyberpunk 2077