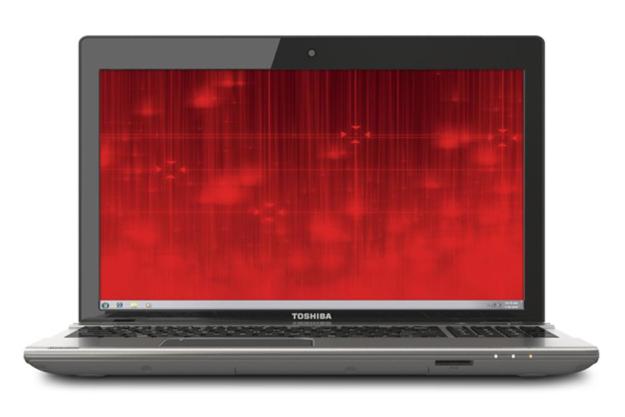 “Toshiba’s P855 is a beautifully designed entry into the mainstream segment. It’s certainly one of the better-looking PCs available and, unlike similarly shiny competitors...”

The 15.6-inch mainstream laptop is the crew-cab pickup of the computer world. A lot of different people buy them for a lot of different reasons. That means the chassis must be flexible and capable of handling the expectations of people laying down a decent wad of dough. When this design works, it brings excellent build quality to every price point. When it doesn’t, well, it has the opposite effect.

Enter the Toshiba P855. Our review unit, which arrived with a quad-core Intel processor and 8GB of RAM, retails at about $900. But this same chassis runs the gamut between $599 and $1,399. That’s a huge difference in price for different variants of the same laptop. Toshiba obviously thinks it has created a product that can handle the expectations of any consumer.

But that question remains to be answered. There’s certainly nothing about the P855 that stands out on paper. It appears, at first glance, to be a typical 15.6-inch laptop similar to those offered by every laptop manufacturer on the plant. Is this impression correct, or is this laptop hiding the awesome?

Toshiba hasn’t pulled any punches with the P855’s exterior design. It uses an aluminum exterior, but unlike competitors who pull the same trick, Toshiba uses textured metal instead of a brushed finish. This results in an attractive appearance that is both eye-catching and functional. Fingerprints and minor scratches aren’t immediately obvious.

There’s more to appreciate than the broad strokes. Detail can be found anywhere you look. Chrome trim surrounds the touchpad. Classy black metal trimmed with chrome covers the speakers. The sides are wrapped in a slightly brighter color of silver, creating a wonderful two-tone look. If there’s any misstep, it’s the keyboard, which is surrounded by a silver material (plastic is our guess) that isn’t textured or colored like the surrounding aluminum.

Connectivity options are robust and generally well designed. There are four USB 3.0 ports, two on each side, along with HDMI, VGA and individual headphone and microphone jacks. An optical drive is part of the deal and sits along the front-left flank.

Not much for travel

The P855 uses the girth provided by its 15.6-inch display to its maximum potential with a nearly edge-to-edge keyboard that includes a numpad. Most competitors have to squeeze in the numpad by reducing key size, but there’s no such nonsense here.

Alas, while there’s plenty of horizontal space, vertical room is lacking. Key travel is minimal and creates a typing experience that’s hazy and vague. Some user may not notice, but anyone who makes frequent use of the keyboard for productivity will likely be disappointed by the P855’s short, mushy key feel.

Toshiba offers a backlit keyboard on some variants of this chassis, but the feature was not included on our review unit. This was a disappointment, considering many competitors offer backlit keyboards in this price range.

Touchpad quality is fine: It’s not exceptionally large, nor impressively sensitive, but it does its job. Multi-touch scrolling works well enough and zoom also is manageable. We would like to see more travel from the integrated buttons, but what’s on offer is adequate.

You can have this laptop with any resolution you’d like so long as it’s 1366 x 768. Even high-end models with price tags above $1,000 don’t have a better optional display. This will limit the P855’s appeal as a high-end desktop replacement more than any other trait.

Quality is standard for a display of this type. We found that the display had a maximum brightness of 253 nits, which is average. Black-level performance was unimpressive. The panel managed to render just 69 percent of the sRGB gauntlet, which is typical for a laptop display but poor relative to a mid-range desktop monitor and some tablets. This means that colors are not brilliant or realistic.

Our review unit came packing a pair of Harman/Kardon branded speakers. At medium to high volume, they sounded brilliant, producing clear, crisp sound that’s among the best we’ve ever heard from a notebook.

Distortion becomes obvious as volume creeps near maximum, however, and is so bad at maximum that we’re unsure why Toshiba didn’t cap volume with a lower ceiling. Moderate volume is more than enough to fill a small room, so keep the dial turned down and enjoy.

A bit hot, a bit quiet

The Toshiba P855 is not an Ultrabook, but it is relatively thin for a mainstream laptop. This seemed to impact cooling performance. In our tests we found that the laptop’s exterior could reach 94 degrees Fahrenheit at idle and up to 103 degrees at load. Neither result is blistering, but neither is particularly cool, and there are 15.6-inch laptops that run cooler.

Temperatures could likely be managed better with a more aggressive fan, but Toshiba has decided to keep it docile. At idle it’s only barely audible and at load it’s not exactly what we’d call loud. The P855 is not a bad choice for users allergic to fan noise.

The weight of the P855 starts at 5.4 pounds. While not bad for a 15.6-inch laptop, it’s enough to dispel dreams of practical portability. Users can certainly take this computer on occasional trips, but longer tours will be taxing.

That’s just as well, because the battery doesn’t hold out long away from a power socket. Toshiba does ship the laptop with Eco Mode, an extreme power-saving profile that can extend endurance to just over five hours, but its settings are so restrictive that it’s impractical.

Reverting to the standard Windows power-saving profile squeezed out 1 hour and 47 minutes during our Battery Eater load test, and 4 hours 17 minutes in our light-load Reader’s Test. Moderate web surfing will result in about 3.5 hours of life. That’s among the least impressive results we’ve recently recorded.

Toshiba doesn’t ship the P855 with much in the way of bloatware. Our review unit arrived with absolutely no desktop icons besides the Recycle Bin and only a handful of Toshiba utilities. Norton Internet Security was installed as a trial, however, and prompted us with pop-ups a number of times.

Many of the Toshiba utilities have some use. Eco Mode, though often impractical, does extend battery life well past what’s possible with the normal Windows power-saving profile. There’s also a shock detector that halts hard drive use when the laptop is jostled, and a switch that lets the user turn off power to the optical drive when it’s not needed.

We think Toshiba ties Lenovo for the best mix of useful software and a minimum of annoying bloatware. Acer, Asus, Dell and HP are all far behind.

Our review unit came equipped with an Intel Core i7-3610QM processor. This is Intel’s entry-level quad-core part, but that doesn’t mean it is slow. SiSoft Sandra reported a combined result of 91.41 GOPS. This was backed up by a 7-Zip combined score of 18,572. These results place the P855 in the upper echelon of performance. Only laptops with even faster and more expensive Intel quad-cores will outrun it.

PCMark 7 backed up the excellent processor results with a strong overall score of 3,071. That’s far from the best number we’ve recorded, but it’s very strong for a laptop that does not have a solid-state drive. It’s better than most other laptops with a mechanical hard drive, and on par with some desktops.

Graphics performance is the only area the P855 stumbles. Though some variants of this chassis are available with an NVIDIA GT 630M, our unit had to rely on Intel HD 4000. This was shown in a 3DMark 06 score of 7,169 and a 3DMark 11 score of 716. Many 3D games are playable on this system, but you will be restricted to low or medium detail with the latest titles.

Toshiba’s P855 is a beautifully designed entry into the mainstream segment. It’s certainly one of the better-looking PCs available and, unlike similarly shiny competitors, the finish on this laptop is easy to live with. You can throw your microfiber rag in the trash.

Beauty aside, there are some downsides of note. Battery life results were disappointing, to say the least, and the laptop’s more expensive configurations could really use a 1600 x 900 or 1080p display option. The value also diminishes when you trick this machine out with too many extras. The Asus N56, for example, offers a 1080p display and an Nvidia GT 630M graphics card at the same price as our review unit.

The entry-level model is the best bet. It has the same wonderful design and excellent build quality, but sells for just $599. You’ll only receive a dual-core CPU, but the other specifications are not meaningfully different. Dropping the quantity of RAM from 8GB to 6GB, for example, is a non-issue. Most competitors to the $599 model will not be as attractive.