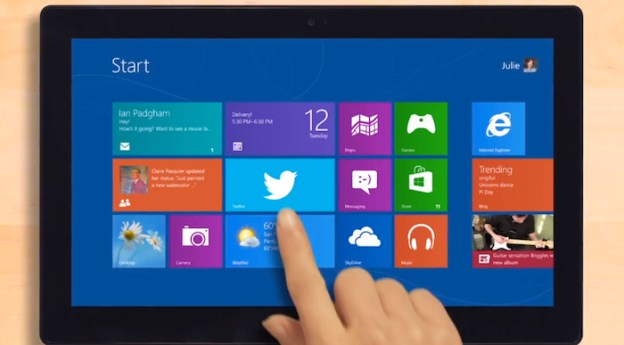 It’s been a while coming, but Twitter has finally gotten around to launching its native app for Windows 8 and RT devices.

Twitter’s Mike Kruzeniski announced the news on the microblogging site’s official blog on Wednesday, noting in his post that the new app brings with it some new functionality that makes the most of the Windows 8 platform.

So first up, alongside the usual Home, Connect, Discover and Me tabs, the San Francisco-based company has introduced Snap view, which allows users to operate another app alongside Twitter by adjusting the size of the (Twitter) app’s interface.

“Snap Twitter into the left or right side of the screen and then start using another app,” Kruzeniski explained in his post, adding “You’ll be able to keep up with the conversations that are happening on Twitter while you watch a streaming video or read a news story.” Snap view also lets you change the size of the app to one-third, two-thirds or full screen, a handy feature that’ll allow you to make the most of your screen real estate.

There’s a Search charm too, to help you more easily find an account or see tweets using a particular hashtag. Again, swipe from the right side of the screen while in any app to bring up the Search charm.

You can also make sure you keep up to date with everything happening on your Twitter feed by enabling Live Tiles and notifications.

Photos come with an all-new landscape view, while a horizontal swipe brings up a selection of images from the Discover tab or user’s profile.

“Tap a photo to view it in full screen, which showcases large photos in the center of the screen, or view the photo gallery from your favorite users,” Kruzeniski said.

The new app was promised back in October, so hopefully the wait will’ve been worth it for Windows 8 and Windows RT users.

It’s available in 22 languages – including English, Chinese, French, German, Spanish, Japanese and Korean – and can be downloaded from the Windows Store here.

Topics
Video-editing app LumaFusion to get a Galaxy Tab S8 launch
Dell is having a big sale on business laptops — up to $2,500 off
Best Gaming PC Deals: Save on RTX 3070, 3080, 3090 PCs
This 8K monitor has 3D tech that can be viewed from all angles
Best 2-in-1 laptop deals: Save on Dell, Lenovo, HP and more
This micro-LED advancement is exactly what AR and VR needs
An AI-generated TV channel is mimicking ’90s sitcoms to nightmarish effect
LastPass vs. 1Password: should you switch?
How to overclock Intel’s Arc GPUs for better performance
I asked AI to recreate the best Super Bowl commercials — to hilarious and horrifying effect
Samsung’s crazy rotating 4K gaming monitor is $700 off today
Best Lenovo Laptop Deals: Save up to $2,287 today
Apple may abandon the Mac Studio just 12 months after it launched