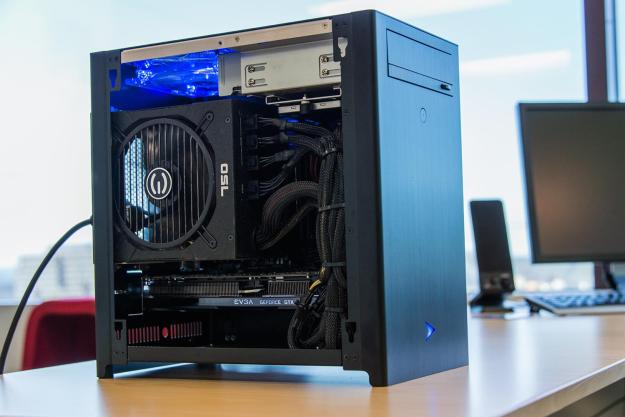 “The Raptor Z40 gives gamers and professionals enough under the hood to handle any task, and doesn’t ask for half of your desk in return.”

It seems going micro is all the rage these days. Custom PC builders continue to test the limits of how much power they can squeeze a small of a footprint.

You won’t find me complaining. Time and time again manufacturers like Origin, Northwest Falcon, and Digital Storm have proven that you don’t need to take up a lot of room to make a lot of boom. Now Velocity Micro is getting in the game. With an i7-4790K, 16GB of RAM, and a GTX 980 to boot, its new Raptor Z40 attempts to find the perfect compromise of price, size and power.

Starting at $1,099 ($2,699 as tested), the Raptor Z40 is Velocity Micro’s attempt to live up to the latter half of their namesake, without sacrificing the former. Will this compact computer prove the manufacturer has what it takes to battle in the increasingly competitive micro-PC battlefield?

Gone are the days of overzealous LED use, and to be honest, I couldn’t be happier about it. Sure, you can still go on NewEgg and grab yourself an obscenely garish and overtly over-the-top case like ThermalTake’s Level 10 monstrosity. But, like a bad 80’s hairdo, these days designers are realizing that not trying to look cool is what makes you look the coolest.

The Raptor is a humble, almost meek representation of that shift in design mentality. Brushed black aluminum lines the case from back to front, accented by just one blue LED on the top exhaust port. The only other standouts are the barely-there power buttons, with Velocity’s lit-up logo just a few inches south.

Putting the “port” in portable PC

Just because the Raptor Z40 is small, doesn’t mean it can’t bring all manner of ports to the party. The model we reviewed came with six USB 3.0 connectors (four on the back, two on the side), and an SPDIF out alongside surround sound audio for front, middle, and rear speakers.

The Raptor doesn’t expect its owners to go fooling around inside after they’ve customized their machine from the company’s website.

This collection was just below two Ethernet ports, one audio line in, one audio line out, one headphone out, two DVI-D (one on the motherboard and another on the GTX 980), two DisplayPort 1.2, four HDMI-out (again, split between the motherboard and the video card), one MHL, and a standard PS/2 slot for an old-school mouse and keyboard combo. Wireless connectivity was handled by an onboard 802.11ac adapter, as well as a Bluetooth 4.0-enabled chip.

One small hang-up we found in the design (and admittedly it’s splitting hairs by this point), is that because the case is basically one solid block of black metal all the way around, the only spare ports for audio in and out were located on the back of the box itself.

That’s a bit of a problem for short-cord headphone users out there. Otherwise, it’s hard to find something not to like about the direction Velocity Micro took with its minimalistic mini-tower.

The Raptor is built to be exactly what it is, and doesn’t expect its owners to go fooling around inside after they’ve finished customizing their machine from the company’s website. Technically there is room for expansion if necessary (namely in the hot-swappable hard drive bays hidden behind the screwed-on side panel), but in the version we tested, the only real extra amenity you’d need would be to pop a Titan X or Z into the mix after the fact.

Even so, with pretty much every top of the line component already crammed inside, we can’t see any reason why you’d even need to think about an upgrade for the foreseeable future. The Z40 is not a system built with upgradability as a priority. That puts it at a disadvantages to some competitors, like the Falcon Northwest Tiki and Digital Storm Bolt series. Velocity Micro hopes its small size and equally diminutive price will be enough to forgive that.

With top of the line components should come top of the line performance, and in this respect, the Z40 did not disappoint. Sporting a 4th-gen Intel Core i7 4790k processor, 16GB of DDR3 , and an Nvidia GTX 980 graphics card, our review unit is the best that Velocity Micro has to offer in this price tier; just short of $2,700 in total.

When pitted against similarly-sized competition, the Z40 both wowed and surprised us by just barely clocking in under the Origin’s Chronos and its Titan X video card. The Chronos we reviewed earlier this month retails for over $1,000 more than our Raptor configuration.

CrystalDiskMark results for the RAID-configured 512GB SSD were much better than predicted, beating out most competitors with 1,123 megabytes per second in reads, and 962 MB/s in writes. The only way competitors can keep us is by offering their own SATA RAID configuration or using a PCI Express hard drive.

Geekbench results, on the other hand, fell right in line with expectations, considering that it features the exact same processor as other form-factor PCs in this price bracket, the 4.0GHz 4th-gen i7-4790K.

All of these systems are quick, and the small gap between each of them isn’t enough to be of any real consequence. That works to the Velocity Micro’s favor, since the review unit was more affordable than the Falcon Northwest Tiki or Origin Chronos.

As expected, the Raptor absolutely blasted through Diablo 3 at even the highest settings, posting a screen-melting maximum of 385 frames per second at 1080p. Only once we tried out a battle in did the results start to come back down to Earth, slumping in around an average of 151 FPS with every option pumped up to ultra.

As we’ve noted in previous reviews, Civilization is a game that’s as dependent on the CPU being competent than the , due to the large number of objects that can appear on-screen and the demanding AI.

Thankfully even at the Z40 didn’t break a sweat, dropping to a minimum of only 63 frames per second with all settings upped as high as they could go. That just ten less than what we achieved with Origin’s Chronos, which itself sports a card twice the price of the Raptor’s GTX 980.

Though there may have been a time when a title like Battlefield 4 would make lesser PCs quake in their boots, these days it takes a bit more than the Frostbite engine to phase the latest line of of Nvidia’s high-end GPUs.

At 1080p and ultra detail we coasted at an average of 110 FPS, a figure which predictably faltered once we switched over the display. Though you may not be too happy shooting down helicopters at the wheezy 36 FPS average we achieved in ultra , at medium things clipped along just fine, maxing out at a respectable 132 frames per second.

As we’ve seen in previous tests, Shadows of Mordor is the title where the double whammy of and the high-res texture pack separates the men from the boys.

At ultra in 1080p the Z40 held up to the challenge just fine, maxing at 131 FPS, but in the waters got a bit choppier, leveling out at an average of just over 30 FPS by the time our test had run its course. Playable, sure, but not enough to continue its dominance over the Chronos and the Titan X, which beat that figure with a substantially higher average of 53 FPS.

At medium settings and 1080p, the Raptor fought bravely against the densely populated streets of Los Santos, benchmarking at an average of 94 FPS. Considering that medium on the PC is roughly the graphical equivalent to what we saw in the XBox 360/PlayStation 3 release, the high score here isn’t too surprising.

It was only after we cranked every setting up as high as it would go in that the Z40 eventually started to show signs of sputtering. With all settings on Ultra, in benchmarks the PC posted a minimum FPS of 23, a max of 25, and an average of just 24 frames per second.

Even so, we’d almost say the flogged framerate was worth it, because in story mode the game looked absolutely gorgeous. Not enough hats can go off to Rockstar for the technical achievement that GTA V on PC represents, and when displayed in , the world they’ve created comes alive in ways never thought possible before.

The Raptor is automatically protected by Velocity Micro’s default one year parts and labor guarantee with every purchase, though that umbrella of support can be extended up to three years if you opt to chip in an additional $200 at the checkout counter.

This is a new era where custom PC makers are ready to prove to the world that smaller form factors don’t necessarily have to mean smaller performance. With careful planning and optimal usage of all the available nooks and crannies, as long as you’ve got enough space for airflow to get where it needs to go in the system, a mini-ITX can, and will, put out just as much power as what you’d get from a tower twice its size. There was never a moment during my time with the Z40 that I felt like I was using a computer any different from its bigger, burlier brethren.

Offerings like those we’ve seen from both Origin’s $3,700 Chronos and Northwest Falcon’s $4,900 Tiki-Z sure look and perform great, but pretty much anything would for that kind of cash. And while the Raptor Z40 isn’t exactly cheap at $2,700 either, the results it posted more than make up for the price gulf between the other two entries. When it comes to getting a high-powered gaming experience out of a box that could fit snuggly in your school bag, the Z40 punches above its weight.

It seems after years of frayed edges and misplaced intentions, premade micro-PCs are finally coming into their own. They may not all be perfect, but with the Raptor Z40, Velocity Micro has made a machine we’d be proud to pack under our desk any day of the week.

Topics
Samsung Galaxy Book 3 Ultra vs. MacBook Pro 16-inch
The best PC power supply for 2023
The first RTX 4080 laptops are much cheaper than we expected
Best HP laptop deals: HP Envy, HP Spectre x360, and more
The best USB-C cables for 2023
Apple just found a bizarre way to make virtual keyboards less annoying
Forget the MacBook Pro 16: Dell XPS 15 is $400 off right now
This popular HP laptop just got a big price cut — now $270
This 8K monitor has 3D tech that can be viewed from all angles
Microsoft continues its unabashed embrace of ChatGPT and AI
Don’t fall for this Mac Mini M1 deal — buy this instead
No, AMD CPUs and GPUs won’t get cheaper — the CEO reveals why
Best Gaming PC Deals: Save on RTX 3070, 3080, 3090 PCs