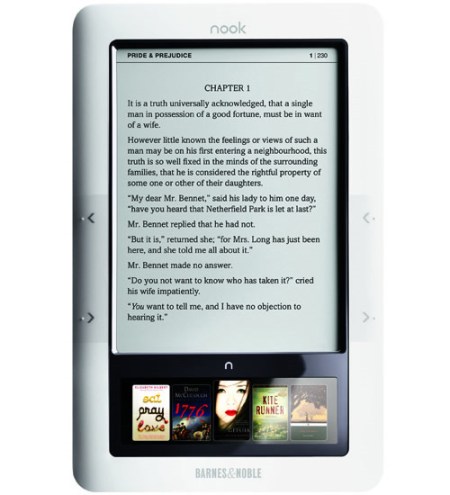 The e-book reading device is the gadget gift of the season. Both Sony and Barnes & Noble have sold out of their new models, and new buyers will have to wait until January for delivery. So why are e-book readers still such clumsy, annoying devices?

I’ve been trying Barnes & Noble Inc.’s $259 Nook for a few days, and I’m not eager to prolong the acquaintance. Some of its problems are specific to the Nook, but most of them have to do with the screen technology the industry has settled on.

It’s known as electronic ink, and it looks more like a printed page than any other technology. It also doesn’t consume a lot of power. But the disadvantages make these screens seem out of place today. They don’t show color. They have no backlight. Most importantly, they’re very slow to change from image to image. A regular LCD monitor updates its screen 60 times per second, while a fast e-ink screen might do so once per second.

That means e-ink screens are very cumbersome to navigate. If you have a list of 10 books in your library, and your selection is marked by a highlight, it takes a second for that highlight to travel to a new selection. To users accustomed to the instant responses of computers and phones, this is what hell feels like.

The Nook tries to get around the slowness of e-ink by including a small, fast, touch-sensitive color screen below the main, 6-inch e-ink screen. While the main screen shows the text of a book, the small screen offers navigation options such as switching to another book.

This would have been a good idea if all the navigation took place on the color screen, but it doesn’t. That screen is too small, so the Nook uses the e-ink screen to display lists of books, clickable links and so forth. Not only does your eye constantly have to travel between the screens to figure out your options, you also have to wait for the e-ink to update. The setup effectively shackles the color screen to the millstone of e-ink, and our voices rise from the depths of gadget hell.

As if this wasn’t enough, everyone I showed the Nook to tried to touch the e-ink screen. It’s the natural thing to try because the color screen is touch sensitive, but it’s a waste of time. Making the e-ink screen touch-sensitive as well would degrade its precious readability, apparently.

There are numerous other problems with the interface, but Barnes & Noble says it’s fixing a lot of them with a software update next week, so I won’t dwell on the subject.

Like Amazon.com Inc.’s groundbreaking Kindle, the Nook connects to a wireless data network, in this case AT&T Inc.’s. It backs that up with the ability to connect to Wi-Fi hot spots, something the Kindle doesn’t do.

The wireless connection lets users buy books directly on the Nook and read them right away. You can also subscribe to newspapers and have them show up every day, except that navigating a newspaper on the Nook will have you longing for a real paper.

Barnes & Noble says the Nook’s battery will last for eight to 10 days of regular reading. I had to recharge mine after four days, but that might have been because I used the color screen and the wireless connection quite a bit.

Barnes & Noble claims to have 1 million publications in its library, and I didn’t have any real problems finding reading materials at prices similar to Amazon’s. Out of 32 fiction and nonfiction best sellers in The New York Times Book Review, Amazon has all but three, Barnes & Noble all but five. Most cost $9.99.

As a book distribution system, Barnes & Noble has some things going for it. For instance, about half of its e-books can be “lent” to other people. That means e-books can now emulate the social exchange of printed books, while avoiding the big pitfall of book-lending: the risk that you won’t get your book back. After two weeks, the book disappears from your friend’s library and reappears in yours.

Your friend doesn’t need a Nook to read a book you’re lending, because Barnes & Noble provides reader software for a variety of devices: BlackBerry phones, iPhones, iPod Touches and Windows and Mac PCs. Support for more smart phones is coming soon. Amazon has lagged in supporting other devices for its Kindle books, clearly preferring that people buy its $259 reader, though it has recently released PC and iPhone/iPod Touch software.

The Barnes & Noble application for the iPhone is excellent, and I far prefer it to the Nook. It’s free, too. A lot of people say they don’t like reading books on an LCD screen, but many of them might change their minds if they turned down the brightness of the backlight.

There are also “tablet” style computers and media players with screens larger than the iPhone. So far, none of them have been great e-book reading devices, but I think we’ll see some next year. They might be more expensive than the current crop of e-book readers, but they also will be far more capable and user-friendly. In any case, the e-ink madness needs to stop.

Finishing touch: How scientists are giving robots humanlike tactile senses
How 5G is changing journalism
The weirdest tech we spotted at CES 2022
CES 2022: The biggest news and announcements so far
The best light therapy lamps
Taco Bell’s Xbox Game Pass-style pass will put a taco in your belly daily for $10 a month
K-pop NFTs are here, but I’m not convinced they’re worth it
Solving VR’s ‘infinite walking’ problem with moon boots
Fighting football injuries with 3D-printed, hyper-personalized pads
Inside the U.K. lab that connects brains to quantum computers
ClipDart is an on-demand barber app aimed at people of color
Why the moon needs a space traffic control system
10 female inventors who changed the world forever