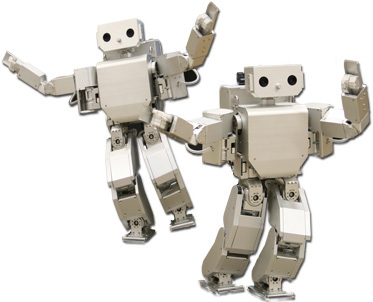 Humanoid robots and their designers will have a chance to show what they’re made of, with an organized Olympics in 2010 that will involve 16 events.

Any team looking to compete in the competition must have a robot that simulates human movement, with two arms and legs required. The competitors are prohibited from using wheels.

The Chinese robotics competition will take place in Harbin, which is home to the Harbin Institute of Technology, and has a robotic soccer event.

Chinese event organizers believe at least 100 research teams from around the world will compete in 2010. Chinese researchers first thought of organizing a competition to help generate more interest and possible innovation so the next generation of robots proves to be better developed. Observers expect humanoids to be able to tackle a list of different purposes one day, but it’s unknown how many years it will take before they are found in public.

In April 2010, the RoboGames will take place in San Mateo, California, a similar event that features robots made by researchers from across the world.

As the real-world possibilities related to humanoids and other robots increases, additional competitions and organized events are now taking place. Honda, Toyota and other major companies are involved in robotic development, though very little technology has made it to common use — but that is a trend slowly changing to reflect on the need for robotics.

India’s plan to end spam texts was a colossal failure. But it’s worth revisiting
The future of manufacturing: A look ahead to the next era of making things
Part Terminator, part Tremors: This robotic worm can swim through sand
The future of sustainability: A look at the next evolution of environmental tech
Three things the Microsoft Surface Duo 2 needs to succeed
Why are so few people actually using 5G in the U.S.? Here’s what the experts say
5G-enabled billboard in Times Square briefly brings interactive game to masses
Sustainable with Google 2021: Nest Renew, traffic light efficiency, and more
The 20 most outrageous and fantastic James Bond gadgets of all time
AirPods 3 could finally debut at Apple’s Unleashed event on October 18
Scientists think the next big solar storm could create an ‘internet apocalypse’
Need a last-minute Halloween costume? Check out these 3D-printable getups
Siduri Wines blends wine and tech in the ultimate sweepstakes experience