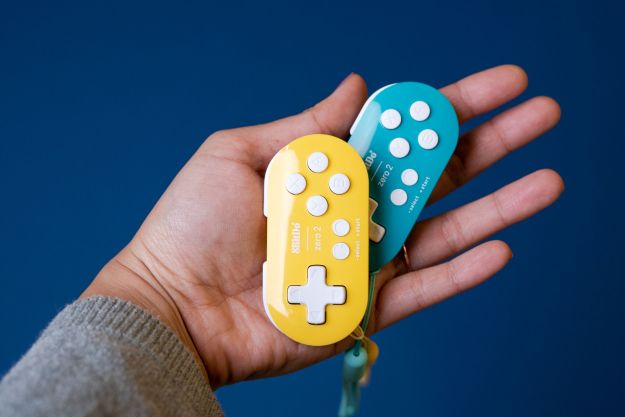 “The compact 8BitDo Zero 2 will fit in your pocket, making it a perfect Switch companion.”

Gaming accessory brand 8BitDo has made a name for itself with authentic and responsive controllers and accessories for a wide variety of systems, and its Nintendo Switch products are among the best around. Many of these mimic the look of a classic controller, such as the Super NES, but with the Nintendo Switch Lite out in the wild, the company also designed a controller that is perfect for traveling players.

The 8BitDo Zero 2 ($20) is a tiny no-frills controller that is perfect for playing retro-style games on the go, though limited compatibility outside the Switch keep it from being an absolute must-have accessory.

Measuring less than three inches in length, the 8BitDo Zero 2 is the smallest game controller I’ve ever seen. Despite this, it doesn’t feel cheap in the slightest. The shell is made of a hard plastic that feels durable in-hand, and the two I received were colored to match the Nintendo Switch Lite’s blue and yellow variants. I also received wrist straps to make it more difficult to lose them, though I imagine some players will put the Zero 2 directly on key chains for easier access.

At a glance, you might think it’s an official accessory produced by Nintendo, and its buttons are certainly on par with Nintendo’s own products. The directional pad is outstanding, with just the right about of ‘click,’ and the face buttons are large enough to avoid making mistakes. The shoulder buttons are a bit too difficult to push compared to the rest of controller, though I eventually learned to adapt.

You could think it’s an official accessory produced by Nintendo.

The 8BitDo Zero 2’s tiny size is its big selling point, and mostly works in the controller’s favor. Because it has no analog sticks, the chance of your thumbs accidentally bumping into each other during normal gameplay is, well, zero. The pill-style design is easy to hold, and the texture of the buttons makes them easy to tell apart. The Select and Start buttons located between the face buttons and the directional pad serve multiple functions, as well.

That’s the good news. The bad news? This is still a very small controller, and you will start feeling the burn after using the Zero 2 for an extended gameplay session.

This isn’t a problem if you and a friend pull out the controllers for a quick Mario Kart 8 Deluxe session, but something larger is necessary for marathons, even if it’s as simple as Super Mario Bros.

The Zero 2’s small size also means it doesn’t include the share or home buttons found on the standard Nintendo Switch Joy-Con controllers. For the latter, there is a workaround by pressing down on the directional pad and hitting the Select button, but you won’t be able to capture gameplay while using the Zero 2.

As a substitute for the ZR and ZL buttons, which must be pressed together in order to suspend gameplay in the Nintendo Switch Online game vaults, you’re supposed to press Select and Start at the same time. This was bugged during our review testing, but the firmware can be updated to correct it if your version comes with anything below v1.04 installed.

On the Switch, I had no problem getting the Zero 2 to connect by following the included instructions. 8BitDo estimates the battery will last around 8 hours which is, somewhat surprisingly, less time than the original Zero controller. That should be plenty of time to game in between charging sessions, however, and the included micro-USB cable lets you do so right from the Switch’s dock.

Though the controllers cannot wake the Switch up on their own, that is their only limitation on the console. It was clearly designed with the Switch in mind.

One size doesn’t fit all

I can’t say the same for Steam, where I encountered several compatibility issues when attempting to connect the Zero 2 to a Mac. Steam registers the controller without issue, as well as all button functions, but the games I tried didn’t always play nice. Guacamelee! worked after ironing out a few configuration kinks, but others either had no function, limited function, or registered input when I’d yet to touch the gamepad.

On PC, these problems were non-existent, and I was able to get the controller functioning in multiple games without any sort of re-mapping. Still, when Mac is listed as a supported system in the user manual, it would be nice for the controller to just work.

The 8BitDo Zero 2 is an excellent ultra-portable controller for playing simple games on the Nintendo Switch, and its design makes it a perfect fit in any Nintendo player’s collection. With terrific buttons and a durable feel, it lets you have controller ready at a moment’s notice. Just stick to the Switch, as that’s where this controller works best.

Not on Nintendo Switch. However, PC and Mac players have access to better controllers with more functionality if they aren’t worried about portability.

The battery lasts about 8 hours on one charge, and its durable design doesn’t feel like it will break. Gamepads tend to be reliable overall and wear based on how often they’re used. The 8BitDo Zero 2 isn’t going to be your primary controller, which likely means it’ll last for years.

Yes. Despite some problems, the 8BitDo Zero 2 is an excellent compact controller with no serious competition.