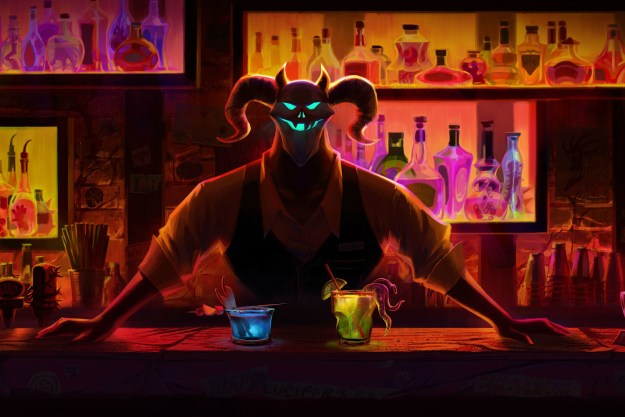 “Playing Afterparty feels like a bad night out with friends. Things didn’t go as expected, but it’s still fun.”

It’s been suggested that all the fun people go to hell. That’s the kind of damnation Afterparty offers. You play as friends Lola and Milo, and you’re on a mission to make a way out of a version of hell that’s more party than punishment. It’s an intriguing concept that, unfortunately, gets bogged down by tedious gameplay.

Afterparty does do several things well. I wanted to root for this game. It’s funny, the voice acting is superb, and the characters speak like real people — a rarity for many games, especially ones that take themselves seriously. Playing Afterparty feels like a bad night out with friends. Things didn’t go as expected, but it’s still fun.

There were moments that gripped me. Milo and Lola are assigned a personal demon, Sister Mary Wormhorn, that torments the duo unexpectedly. The anthropomorphized personal demon is a funny idea, and it’s brilliantly played. She brings up both of their separate family issues, but Milo and Lola are willing to give as good as they get.

Milo points out that, no, his dad was not perfect — but he wasn’t a monster, either. Like many parents, he cared and tried, and still failed a lot of the time. Lola, who often butts heads with her sisters, is willing to admit she does think her sisters are a little dumb. Yet she still cares about them. They’re family. This real, level approach to each character’s backstory avoids the overly dramatic stereotypes video games often use when trying to depict family troubles.

Playing Afterparty feels like a bad night out with friends. Things didn’t go as expected, but it’s still fun.

And, of course, the afterparty that is the afterlife soon unravels. Satan isn’t the Prince of Darkness, or the Prince of Partying, he portrays. He reminds me of that guy who still goes to college parties years after he graduation, not the ruler of Hell. As the game progresses and the night wears on, demons slump over, pee in the streets, and leave the bars empty. It’s funny, but also a bit sad.

Yes, the game has its moments. Unfortunately, Afterparty never ties them all together. I need more than a few empowering moments to care for Milo and Lola. And while I admire the unexpected turn for Satan — and the “hell as one great big party” concept — I found myself wondering why this subplot took over the game’s story.

Nothing matters when you’re dead

I spent a good deal of this game questioning whether Milo and Lola will make it out of hell, or if Afterparty would trick me in the end, laughing as Satan explained, of course, there isn’t a way out. I anticipated the plot pitfalls the game might put in my way as Afterparty sent me from one place to another, following very obvious clues on what to do. Time and time again, everything worked out for Milo and Lola — even when it seemed it shouldn’t.

That’s when I realized nothing in this game matters.

Afterparty throws in some minigames, yes, but they’re simple distractions, not real games with real consequences. At a crucial moment, I blew my lead against my demon opponent in one of the game’s challenges. She seemed to take pity on me. “This is it,” I thought. “I’ll get to try again, and I know I can beat her this time.”

That’s how most games work. You try, you fail, you try again until you stop failing or you can’t progress. Not so in Afterparty. It’s ironic, since hell seems the perfect place to face consequences. Instead, the game let me continue as if I had won.

That’s when I realized nothing in this game matters.

Afterparty is not so much a game as an interactive story. It’s a good interactive story, but not a game that offers any challenge. Without the sense of a true test or obstacle, or the need to call on brainpower to figure out the way forward, I found myself just going through the motions.

Other narrative-focused titles like Life is Strange or Detroit: Become Human aren’t difficult, either, but they have a sense of consequence that Afterparty lacks. In those games, the way you overcome obstacles has an obvious impact. You’ll always see an outcome, but some are better than others. Entire character arcs can change because of your decisions.

I never felt that way with Milo and Lola. They felt like recycled characters with an inevitable end. They’re best friends that aren’t interested in the parties and social politics of popularity. He’s shy. She’s got spunk. They have problems but, in the end, they’ll find a way to live with their problems even if they can’t entirely solve them. This is a familiar story and, because the way I play the game has no impact, it falls apart.

Afterparty is full of tasks that feel like chores to tick off a list. They’re not challenging. They’re just things to do for the sake of doing them. It’s something the game lampshades and pokes fun at, and the jokes are good. Still, that’s not enough to forgive the original sin of including tedious tasks in the first place.

Afterparty has a solid script and superb voice acting, but it’s not an engaging narrative-driven adventure. Like a night out with too many drinks, it’s easy to go in with the expectation of fun and come out regretting how you spent your time.

For story-based games, yes. There are lots depending on what you’re looking for. Life is Strange and its new sequel are the best alternatives. Look to Quantic Dream’s catalog of Detroit: Become Human, Heavy Rain, or Beyond Two Souls for other options, especially if you want to feel the impact of your choices felt throughout.

Afterparty is short. It takes about eight to 10 hours depends on what choices you make and how interested you are in exploring hell.

If a slightly raunchy playable version of The Good Place sounds like a good way to spend a day or two, sure. Afterparty is only $20, so if you’re a fan of indie games that are more story than game, this might be for you. It’s also available on Xbox Game Pass.

Still, consider skipping this one. There’s nothing spectacular that makes this a must-play title, even if it does have a lot of charm.