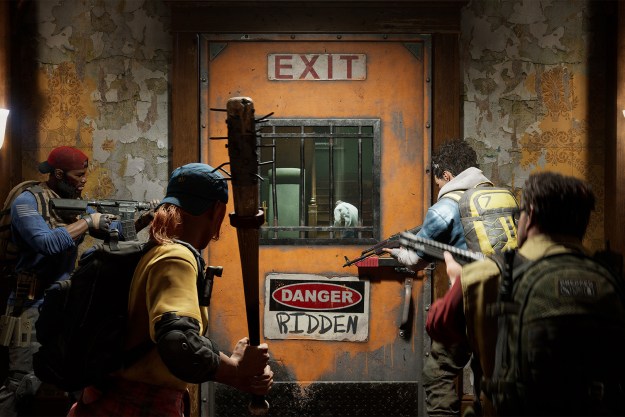 “Back 4 Blood is a solid evolution on Left 4 Dead's co-op action that could be further improved with some slight quality-of-life tweaks.”

The elevator pitch for Back 4 Blood is simple: What if the developers behind the very first Left 4 Dead game — a title that arguably sparked an entire genre of co-op survival shooters — made another Left 4 Dead game, but bigger? It would have more zombies to cut down, different weapons that have their own stats, a cast of survivors with their own strengths, and a full-blown card system that would make it possible for players to create builds over the course of their runs.

Back 4 Blood has all that and more, wrapping up an evolved version of Left 4 Dead in a bloody, brilliant package. Players can explore the game’s extremely forgettable story — filled with brain-meltingly bad dialogue, of course — and exciting set pieces, slaughtering zombies in one of the most satisfying co-op shooter experiences I’ve ever had.

But Back 4 Blood is best played just like that — as a co-op shooter. In fact, it punishes players for daring to play alone rather than shunted into a game with random players. That, along with some other strange decisions that make the game’s quality of life akin to its survivors’, end up stalling the action, giving a good view of the game behind the gore.

The heart of the cards

Back 4 Blood is, on the outside, a blatant spiritual successor to Left 4 Dead. The game pits players against unending hordes of zombies (this time called Ridden due to the parasites that turn normal folks into flesh-hungry abominations), with the goal of reaching a safe house at the end of each level. In between are exciting set pieces, like bars that players defend while Dick Dale’s Miserlou blasts over a jukebox or former settlements that have been overrun by the undead.

Every trip that players take into these areas is influenced by Back 4 Blood‘s main selling point: The card system. Players have decks of cards that either passively or actively change how their character works. Some are simple, giving players more ammo capacity or health, very base-level stuff. Others are much more game-changing, like cards that remove a player’s ability to aim down a weapon’s sights.

The latter cards are what lead to builds. I have a deck that’s built around shotguns, my favorite weapon in any game. I said “to hell with aiming, I’m going to be a running, shotgunning tank,” so I threw cards in my deck that removed the ability to aim down sights in favor of more speed and melee damage, gave me temporary health points every time a pellet hit an enemy, and added other perks that increased my damage and ammo. The resulting character was unlike any other I’ve played as in a survival co-op shooter, because I actually made them. Back 4 Blood‘s card system is the game’s best addition to Left 4 Dead‘s foundation, resulting in fun, unique character builds for every run.

Back 4 Blood‘s card system works the other way, too, with the game’s A.I. director playing cards that make levels more difficult. These changes can range from a dense fog appearing throughout the stage to the game’s special infected (aka mutants) becoming armored. If you get a card that’s the latter, you’re in for a bad time, because Back 4 Blood has no shortage of beefy undead to throw at players. Unlike Left 4 Dead, which would occasionally throw some strong zombies at you, Back 4 Blood‘s special infected come in an unending stream. At pretty much every moment, there’s a tallboy waiting to crush you, a spitter ready to snipe you, or a retch locked and loaded with bile. It’s one of the two balancing issues Back 4 Blood has.

Back 4 Blood‘s card system is the game’s best addition to Left 4 Dead‘s foundation, resulting in fun, unique character builds for every run.

The other issue is the game’s entire final act, which includes its last boss fight. I won’t go into detail about it, because it is genuinely a fantastic set piece, but it’s also where the game’s difficulty kicks up to 11 after humming along at a comfortable five. The group of players I went into that fight with had to figure out a system for taking out this multistage baddie, eventually resulting in a way to cheese its second form. We didn’t have to do that during any other part of the game, and it ended up leaving a sour taste in my mouth right before the game’s final credits sequence set up additional content being added to the game.

No co-op, no reward

After beating the game’s last boss, my group and I were rewarded with Supply Points, Back 4 Blood‘s main currency. They’re used to buy your way through Supply Lines, which reward players with cosmetics, emblems for their profiles, and most importantly, cards for their decks. I personally have no problem with unlocking cards piecemeal like this, as the system lets players pick and choose which cards are important, and plenty of Supply Points are doled out at a time.

What I take a major issue with, though, is that I can’t earn Supply Points by myself. In fact, playing Back 4 Blood solo cuts players off from all of its rewards, including achievements for the game. The game essentially forces players into its cooperative mode if they want to make any meaningful progress, while punishing them with wasted time if they decide to tackle the game solo.

This decision, while annoying, is made even worse by the myriad of questionable quality-of-life choices included in Back 4 Blood‘s co-op. During my first few sessions, in which I slaughtered the undead with some random players, I was held up twice by people going away from their keyboards. During the game’s setup mode, in which players can purchase weapons and gear using copper found throughout levels, players that aren’t ready keep everyone else waiting up to three minutes. That ended up happening to me multiple times during my co-op sessions with random players.

Of course, people going AFK and holding up a game aren’t usually a problem in co-op games thanks to the wonderful and extremely standard option of booting them from the game with a simple vote. Back 4 Blood, being a social game about community, does not give players that option. You’re stuck with your group unless you decide to leave the game.

These quality-of-life choices should have a small impact on my overall impressions of Back 4 Blood, but they don’t. To reiterate, Turtle Rock Studios actively pushes players toward Back 4 Blood‘s co-op mode by giving them no rewards if they play by themselves. Then, once in a co-op game, players are at the will of the random players they are matched up with. It’s an issue that can be avoided if you always have three friends on hand to play the game with, but let’s be real, that won’t be the case. Anyone who plays Back 4 Blood is going to end up playing with random players a fair amount, and they will assuredly run into these problems.

I had a raucously fun time killing zombies, drinking a beer, and talking to friends, all while not having a single critical thought.

All that being said, co-op is also Back 4 Blood‘s strongest component. I had a raucously fun time killing zombies, drinking a beer, and talking to friends, all while not having a single critical thought. Players who want a more involved experience can use the game’s extensive ping system, which marks equipment, weapons, and enemies, and even offers a solid amount of communication options. I ended up in a match with one random player, and we let each other know when we were ready to trigger a horde or start a level by using the communication wheel.

Back 4 Blood‘s co-op is sadly hobbled by a few poor choices that make any match in the game with random players a toss-up. Players will either get into a match with nice, thoughtful partners, or they’ll end up waiting to actually play because someone decided to go make lunch before quitting out.

There isn’t a more situational game than Back 4 Blood. With its restrictions on what players can earn from its solo campaign mode, players are forced to gamble with their time in the game’s co-op. A few small changes could elevate this game past Left 4 Dead, but at the moment, Back 4 Blood refuses to respect players’ time by leaving out the simplest of co-op necessities. For anyone with a dedicated group of friends eager to play, Back 4 Blood can be fantastic. Anyone else’s fun relies on a coin flip.

Back 4 Blood‘s main story takes upwards of 15 hours to beat, but getting the Supply Points to unlock everything in the game can stretch that total past 25.

Yes. Back 4 Blood is my favorite co-op title this year, and its few wrinkles are sure to be ironed out soon enough.

Topics
How to heal fast in Back 4 Blood 4
How to add cross-platform friends in Back 4 Blood
How many acts are in Back 4 Blood?
How to drop items to teammates in Back 4 Blood
The best RPGs for the Nintendo Switch
How to link your Fire Emblem Engage and Fire Emblem Heroes account
Xbox and Bethesda’s Developer_Direct: how to watch and what to expect
Goldeneye 007 comes to Game Pass and Nintendo Switch later this week
The best iPhone games in 2023: 31 games you need to play right now
I can’t believe I’m recommending Forspoken on PS5 over PC
Redfall’s May 2 release date revealed during Developer_Direct
The best Fire Emblem games, ranked from best to worst
Xbox just surprise announced and released a stylish new Game Pass title