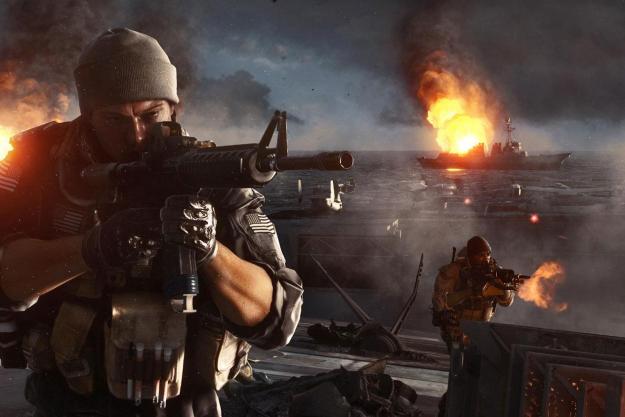 “Battlefield 4 is DICE’s strongest effort in the series yet, with a gorgeous campaign joined by an excellent evolution of epic warfare online.”

Electronic Arts marketing wizards have the right idea: Battlefield 4 is a game of moments. Linger too long in any one of them and you run the risk of being fragged or – worse – shattering the all-flash-no-substance illusion. You want to let them wash over you, and exult in the visceral thrill of reflexively outthinking a wily opponent. DICE might not have delivered the resounding success it was hoping for, but its latest game is the biggest, loudest, and most satisfying trip to the online Battlefield yet.

You can say this about Battlefield 4‘s campaign: DICE seems to have realized the folly of its approach to the story mode in Battlefield 3, and the team delivers a follow-up that better captures the spirit and scope of the multiplayer experience. Putting aside any issues with the writing or dialogue – and there are many, as you’ll soon see – this is an entertaining roller-coaster ride through a modern-day warzone.

Battlefield 4 was described as “human, dramatic, and believable” when it was first revealed earlier in 2013. Oh, the irony. True, there are humans in the story that find themselves in dramatic situations that require believable responses, but it ends there. When your mute, blank-slate protagonist Recker – it’s Daniel Recker, says the Internet; file it under “campaign facts that don’t leave an impression at all” – has to cut off his commanding officer’s leg… well… it’s certainly a dramatic situation that you believe a human could have lived through.

It all comes down to this: Battlefield 4‘s story is status quo for blockbuster shooty-shooty games. Accept that and you stand to have a great time.

Recker’s journey is centered around a brewing war between the United States and China. Mean, old Admiral Chang isn’t a fan of words like “peace” and “harmony,” so he plots to overthrow his government and use his new power to foment unrest around the world. He’s got an easy target too: the U.S., implicated in the apparent assassination of Jin Jié, a popular Chinese leader with the potential to end the nation’s conflicts. With the voice of China’s future martyred and the U.S. conveniently labeled the villain, Chang’s stage is set.

Who needs to be confined by silly walls when a makeshift doorway is one well-placed grenade away?

Enter Tombstone squad. Recker finds himself elevated to a leadership role in his four-man team shortly after the story kicks off. Over a series of missions lasting 6-8 hours in total, Tombstone establishes itself as the last line of defense against Chang’s disruptive plans. Empty vessel or not, Recker’s squad leader role allows for a new wrinkle to be introduced in Battlefield’s campaign play.

You’re now able to use a pair of tactical binoculars to scan the environment and highlight any enemies or enemy vehicles you’re able to spot. Once marked, enemies remain visible even when they manage to break line of sight. You can then issue a squad-wide “assault” order that tells your crew to focus their fire on a particular target or cluster of targets. Using this feature at the right time buys you the freedom to flank entrenched forces as they shift their focus to your attacking squadmates.

You’ve got a lot of space to work with too, thanks to Battlefield 4‘s elaborate environments. Battlefield 3‘s solo mode felt very constrained in a lot of places, offering up a straightforward series of battle corridors that felt like shooting galleries and left little room for deviation from the set path. There is rarely a set path in Battlefield 4‘s campaign, and even when there is, the cramped confines are justified by the demands of the story (such as when you’re fighting through the bowels of a besieged aircraft carrier).

The abundance of open spaces clicks well with the “big war” mentality of the Battlefield games. There’s a lot of freedom here to improvise and form your own battle plans on the fly, as conditions change. The destructible environments – which look stunning on PC with graphics set to high – create plenty of opportunities for changing conditions too. Who needs to be confined by silly walls when a makeshift doorway is one well-placed grenade away?

Recker is a comically mute leader of soldiers who spends most of the game following the orders of his subordinates.

For all that feels right about the flow of the action in the campaign, the story undermines it, constantly reminding you that, yes, this is a blockbuster video game. Recker is a comically mute leader of soldiers who spends most of the game following the orders of his subordinates. It’s downright silly, and as strong an argument as there’s been for the fading relevance of the mute protagonist in blockbuster shooters.

Players don’t necessarily need a human heart to connect with, but without that very necessary point of identification, you’re left with nothing more than a series of moments. Gripping moments, no doubt, flowing over with ample helpings of rat-a-tat-ing machine guns and eye-searing explosions. But they’re all disconnected. There’s nothing keeping you riveted to the character drama. For all of the first-person perspective trappings, you never connect with Recker. Why would you? He doesn’t really exist.

That’s what you should know going in to Battlefield 4‘s story. This is as stellar a video game production as there is, with market-leading presentation values and just enough content to whet your appetite for epic battles online. There’s just no heart to it, despite any claims to the contrary. DICE is getting there with its stories, but Battlefield 4’s campaign is ultimately more tentative step forward than bold reinvention.

The campaign offers more than a mere training ground for Battlefield 4’s online play, but harbor no illusions: this is a game built for multiplayer above all. And – barring some technical hiccups that vary by platform – DICE hits a series high here, with everything from minor tweaks, to things like squad size and level progression, to sweeping improvements, like the new “Levolution” feature that allows you to literally re-shape every map.

The fundamentals remain the same: four soldier classes that exist alongside one another in a delicate balance that’s built to encourage cooperation and teamwork. Massive maps filled with a varied assortment of land, sea, and air vehicles for you to commandeer. You might see a small firefight escalate when dueling tanks roll through, or a pitched defense of a building suddenly shattered when a raging dogfight up above ends with a crashing plane reducing the structure to rubble. It’s beautifully orchestrated chaos when it all gels together.

The most immediately noticeable twist in Battlefield 4 is Levolution. Take “Flood Zone,” a rain-soaked urban battlfield built around tall buildings with interconnected rooftops, and streets filled with water that slows each soldier’s walking speed. There’s a levee in the northern part of the map that crumbles under heavy enough fire. The unleashed torrent of water completely fills the streets, rising high enough that soldiers must swim to get around and boats become a viable means of transport.

Improvements… to everything from play mechanics to user interface build on top of one of gaming’s most varied online first-person shooters.

Whether it’s a powerful surge of water pouring over the top of a crumbling levee or a slowly toppling skyscraper, these map-altering moments are immediately captivating to behold. Battles pause frequently as friend and enemy alike take a moment to absorb the enormity of the destructible environments. It’s the long-held promise of the Battlefied series realized; this is, without question, epic warfare.

Smaller changes help to bolster Battlefield 4’s already strong foundation. The new squad limit of five (up from four) allows for larger teams of friends to go into battle together. There’s a more immediate feel to the gradual level progression, thanks in large part to a re-tooled user interface that more clearly communicates your progress. You’ve got a better sense now of which unlocks you’re close to getting and how far off you are, both in the post-match results screen and on your personal Battlelog page.

Best of all, there’s a much stronger focus on encouraging cooperative play. Squad leaders (randomly chosen) also have the added ability to mark targets for capture or defense that everyone in the squad can see and earn bonus XP for. Field Upgrades replace Battlefield 3’s Specializations, with squad-wide boosts unlocking over time as the group scores points together in a given match, though buffs are also lost, one at a time, whenever the entire squad is taken out.

All of these moving parts mesh together very well when you find yourself in a lobby filled with people that get how to play the game. The Battlefield series hasn’t ever aspired to deliver the sort of twitch-shooting excitement that works for small-team, time-limited games. Those modes are included in BF4 too, but the true highlights are, as ever, the big team games. Conquest, Rush, and the newcomer, Obliteration, dominate on most servers.

Obliteration feels like a mash-up of Conquest and Rush. A single bomb spawns on the map that both teams must fight for possession of. The team that carries the bomb must plant it at each of the opposing team’s three control points, and then defend the location until the bomb detonates. It’s not some reinvention of Battlefield’s basic mechanics, but it’s a fast-paced, firefight-heavy match type that offers something to every type of player.

A dry assessment of Battlefield 4 offers no surprises: stellar multiplayer backed up by flawed, yet enjoyable single-player campaign action. Look closer, however, and you see a much stronger overall effort than Battlefield 3 was. The scope of the action on the solo play side is much bigger than it has been before, with combat situations that feel truer to the spirit of the series. On the multiplayer side, improvements large and small to everything from play mechanics to user interface build on top of one of gaming’s most varied online first-person shooter experiences. Perfection may be a myth, but Battlefield keeps improving, and Battlefield 4 is DICE’s strongest effort to date.

This game was reviewed on PC and Xbox 360 using product provided by Electronic Arts.

This game was reviewed on the PC and Xbox 360 using copies provided by the publisher.