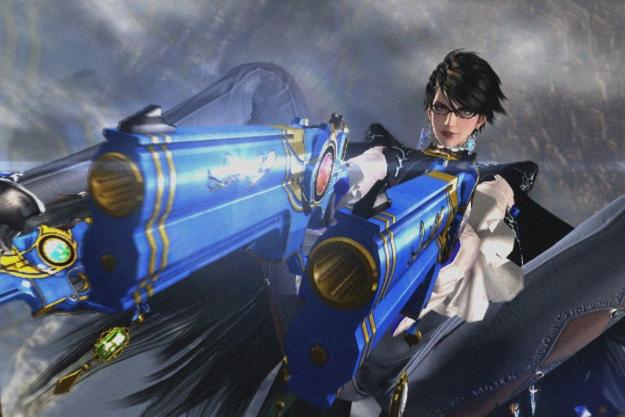 “Bayonetta 2 is a game whose gargantuan barrage of sex, violence, and surrealism sets the mind on fire in the best possible way.”

“Reality,” explains Hermann Rorschach, the 20th century Freudian psychologist who created the famous inkblot tests that bear his name, “is created by harmonics that physically manifest as mirror reflections of the soul.” By smearing ink on paper then folding it to create symmetrical blobs, Rorschach used amorphous imagery to assess personality and plumb into the soul.

Nearly a century after he started his research, the good doctor has unlikely fellows at Platinum Games. Bayonetta 2 is itself a Rorschach test: Insanely specific while also leaving a crazy amount of space for the imagination. It’s a game whose gargantuan barrage of sex, violence, and surrealism sets the mind ablaze in the best possible way.

Bayonetta 2 is a Rorschach test: Insanely specific while also leaving a crazy amount of space for the imagination.

Take Bayonetta herself. The Umbran Witch barely looks real, with an arched back, sharp and curved as a new sickle, on top of legs stretching two times too long. Her wit and reflexes are faster than some crossbred clone of Groucho Marx and Michael Phelps. She can fire four pistols at once, two of which are locked into four-inch pumps she walks around on with impossible comfort. In her first game, she woke up out of 500 years of amnesiac wandering and killed a god. With her hair. Right.

She’s cool and sexy, but like her friends Rodin and Jeanne (and the other English-speaking characters in the story) she’s only human-ish, more totem than person. Yet she’s still relatable. When Jeanne’s soul is dragged to hell and Bayonetta sets out to save her, the game goes from bizarre detached humor (see: Bayonetta pushing around a bulbous caricature of Moonwalker-era Joe Pesci) to genuine heart. Her love for Jeanne shines through in the game’s bright animation and mercifully brief dialogue, as does her concern for the strange boy Loki she befriends.

That ability to be both sardonically unreal and legitimately affectionate is precisely what makes Bayonetta’s strange journey so appealingly provocative right from the start.

She certainly doesn’t go anyplace normal either. Mountains that span the space between heaven and hell; churches crumbling inside hurricanes you surf up while fighting angel-faced dragons; the belly of a demonic, battleship-sized manta ray. Platinum’s game never wants for scenic variety. In the same way that it balances irony and soul, though, Bayonetta doles out spectacle at just the right pace.

Chapters never drag on as they did in the first game, and it knows right when to let you relax and take in the scenery. Just pummeled a giant shape-shifting diamond full of lava? Here’s a stretch of platforming where you can run around as a panther or double-jump on butterfly wings while hunting for old witch hearts to extend your health. Then it’s back into boss fight duels with masked swordsman priests.

The counterpoint between what’s literally happening on screen and its logical impossibility lulls you into a state that’s both meditative and frenzied. When Bayonetta is crashing through New York City on the back of a deep blue fighter jet, spitting quips as she does in the prologue, you just go with it to see what happens, which is a perfect mindset for Bayonetta 2‘s fights.

Bayonetta 2’s action and its noise, its wild sex and sound, is a wide open doorway into the light.

More fluid than the rigid, combo-driven brawls of its spiritual predecessor Devil May Cry but far more technically versatile than comparable games like God of War, Bayonetta’s a strangely balletic bruiser. Mixing strikes with your hands and feet, each one changing based on the weapons you have equipped, feels like a silky and familiar nod to other fighting games.

As was the case in the first game, though, dodging is as important to progress as striking. Leaping out of the way of some demon’s giant flaming sword at the last second slows down time, letting you jump back in for a series of fast hits. Going into “Witch Time” also quickly builds up the “Umbran Climax” meter, which lets you release a series of even more powerful hits once activated.

Combat can be as outsized and visually overwhelming as everything else in Bayonetta. Equipping a giant scythe to your arms and fire-spewing canons to your feet while fighting enormous spiked suits of armor – a fight that can end with Bayonetta repeatedly spanking the armor until it explodes – is almost too much. Too much conflict, too much overblown eroticism as her outfit’s stripped away. (Oh yeah, Bayonetta’s combos end with giant attacks made out of the hair that also serves as her clothing. Try to keep up.) But again, the game keeps its balance by never wresting control away from you.

Inside all the craziness, you’re still making all these moves happen, even when the action scales up to a tiny, winged Bayonetta fighting building-sized giants. It also works in Tag Climax, the bite-sized online co-op fights that let you earn extra halos to buy new weapons, items, and costumes. Two people create a lot of visual clutter but even then everything feels just right, and the pressure of resurrecting a fallen partner adds a nice new layer of tension to the battles.

Purists may find Bayonetta 2 a little too easy on normal difficulty compared to the original, but how it balances access for newcomers and experts alike on harder difficulties is notable. (Even the Wii U touch controls work, though they don’t give the same technical satisfaction.)

The whole package is just more approachable. Bayonetta is less confrontationally cruel than in the first game, and the is story more intelligible and less grim-faced in the way it takes pleasure in anarchy. The dominant color palates in both games reflect that shift, with the aggressive red themes of Bayonetta giving way to a more soothing blue tone in Bayonetta 2. Whether that’s a good thing is a matter of taste, though.

That’s true of all the game’s excesses. For the right player, the way Platinum’s game needles the brain with its powerfully suggestive imagery and action can be illuminating. If seeing an impossibly proportioned woman strip while a Mediterranean city disintegrates around her, monsters exploding everywhere, makes you think about the human body, architecture, and dancing, this game’s for you. If you just like things that are bonkers and don’t need deep meaning, this game’s for you. If you want an odd fantasy story with characters who love one another, that’s here too.

But these are all strong flavors that can, like rotten fruit, become too sweet. A Princess Peach costume that has you staring at Bayonetta’s be-thonged rear every time she takes a step is just one example of how this game can reach Gwar-levels of exploitation bombast. Even that feels oddly progressive from the one point of view, though. On the one hand, it’s the sort of lascivious objectification that’s plagued gaming forever. On the other, it reflects a newfound openness towards sex and kink typically unheard from family-centric corporate entities like Nintendo.

That is Bayonetta 2‘s greatest success. It may not redefine or even perfect action gaming, but that action and its noise, its wild sex and sound, is a wide open doorway into the light. If you’re willing, that is, to look for it.

Nuclear waste, diamonds, and how they can revolutionize smartphone batteries

The best Macbook alternatives for 2022

The best external hard drives for 2022

The best touchscreen laptops for 2022

Stop worrying so much about benchmarks when buying a new GPU