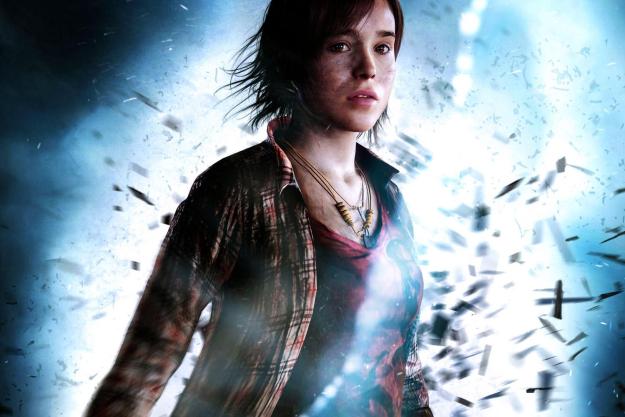 “Beyond: Two Souls is a game deserves to be experienced, if not played.”

Beyond: Two Souls is an incredibly sophisticated game that masquerades as a simple one. Because your choices radically impact the way the story plays out, entire sections may not be accessible to you the first time you play through. Seamless integration makes it easy to think your way is the right way – and in a sense it is. It’s just not the only way.

In the Quantic Dream’s latest interactive drama, Ellen Page portrays protagonist Jodie Holmes, a woman locked to a spirit named Aiden, who is both her best friend and occasional tormenter. The player experiences a 15-year period of her life, presented non-chronologically. One chapter you may see her as a rebellious teen, the next chapter might jump backwards to her childhood. The earliest you see Jodie is as an awkward 8 year old, while the latest has her as a CIA trained operative. But the path between the two is complicated and nuanced.

Comparisons to Heavy Rain, developer Quantic Dream’s previous choice-based crime game, are inevitable. But a more accurate comparison would be to Telltale’s episodic The Walking Dead. Considering how many awards that game one (including our own Game of the Year), that’s not a bad thing.

Like The Walking Dead, Beyond is less concerned with gameplay mechanics and controls than it is in creating a gaming experience. It would be easy to call it an interactive movie and be done with it – and there is some truth to that – but that also undervalues what Beyond is.

Unlike The Walking Dead, where any choice could have massive and usually unforeseen ramifications  later in the game, choices made in Beyond only affect a segment of the game. Each of its 26 chapters starts in the same place, regardless of what you did in the last.

Both Jodie and Aiden are playable characters, and you can switch between them at almost any time. Aiden can move more freely than Jodie, but the two are tethered, limiting his range. He can also interact with items and knock them over, choke people unconscious, and possess them – when the story dictates. Aiden’s abilities to interact are only available when it benefits the story. You can’t just possess a person, you can only possess very specific people that you use for very specific purposes. Some doors Aiden can float through to reconnoiter, while others are impassible. It’s a limited freedom, and like Jodie, only certain items – signified by a white dot for Jodie or a blue on for Aiden – can be interacted with.

Though you control each character’s movement, the gameplay often forces you in one direction, which can feel awkward. You’ll also encounter a number of quick-time events. In one chapter, Jodie runs from a SWAT team (for reasons best left unexplained here) and escapes into a forest. She may approach a downed tree, prompting the game to momentarily slowdown, which is your cue to react – in this case by pressing up on the right thumb stick. The next obstacle may require you to slide by pressing down when prompted, another might flash a specific button for you to repeatedly mash.

Unlike most games that feature quick-time events like these, there is no failure in Beyond. If you run into the tree, it might slow you down and the SWAT team may catch you and arrest you. That scenario will cut to a scene where you must escape from custody. Alternately, if you do make it into the nearby town, you will face off against the SWAT team in a sequence where you control Aiden instead of Jodie. Jodie prevails either way, but the details in getting there make Beyond what it is.

Branching dialogue trees give players more opportunity to deviate from the path with two to four options on how to respond; for instance, telling the truth or lying. There is no right or wrong, but both choices cause the rest of the chapter to play out differently. This simple gameplay mechanic – merely hitting a button – changes everything within a chapter, even if it takes a replay to realize it.

While the gameplay is relatively simple, the graphics are anything but. Academy Award nominees Ellen Page and Willem Dafoe bring the characters to life in staggering detail. You can see freckles, moles, and other tiny blemishes on their faces, right down to the pores. Their facial animations are the best in any console game to date.

As the story feeds you bits and pieces of how Jodie and Aiden grew up, each event helps to explain the later scenarios. Jodie is at one point rebellious, then later shy and reclusive. It’s not until later when you see the events that happened in between you realize why. Through it all Page remains the anchor. It’s through her that Jodie becomes a real character, and one that it’s hard not to sympathize with as she endures some truly terrible ordeals. There is a heavy supernatural element to the game, but Jodie’s actions and motivations are very much grounded in reality.

Each chapter contains its own compelling mini-story. Some are bite-sized and focus on a single event, like Jodie using her power for the first time in front of Nathan Dawkins (played by Willem Dafoe), Jodie’s chief experimenter and surrogate father. Others run over an hour as Jodie struggles with suicidal thoughts while living on the streets. The uncertainty of how long a section is helps to push forward the pacing throughout the 10-12 hour game.

Beyond is all about personal choice and preference. If you want Jodie to seek revenge against the children that tormented her, you can, or you can walk away. If you want her to be helpful rather than sullen as a child, that’s your choice. The fact that these don’t affect future chapters weakens the finale a bit though. You do have multiple choices for how you want the game to end, but they are locked to the chapter rather than the game, which negates most of your earlier decisions.

Beyond: Two Souls allows you to tailor the game to your own whims as few other games have done before. Play it twice and it could be a completely different experience. Play it four times and you may still find things that surprise you. The consequences of your actions don’t carry as much weight as in The Walking Dead, but expert storytelling and pacing keep you invested from chapter to chapter, and A-list Hollywood talent brought to the screen in painstaking detail makes a huge difference. Beyond isn’t just a game worth playing, it’s an experience worth trying.