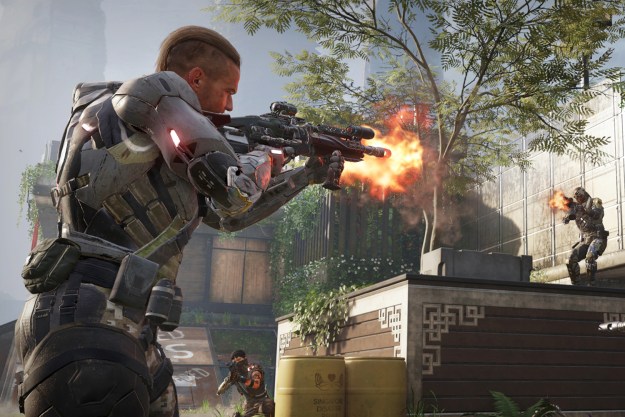 “Call of Duty: Black Ops 3 piles on new ways to play without much concern for quality.”

When Call of Duty: Black Ops 2 came out, developer Treyarch seemed like it might be the long-running first-person shooter franchise’s savior.

Prior to its release, repetitive annual releases felt like they were slowly crushing Call of Duty to death. Then Treyarch dropped Black Ops 2 — a game filled with good ideas and earnest, interesting attempts to advance the series into exciting new territory. It told a subversive tale of unforeseen consequences and the cost of conflict, with a branching plot that not only required players to make tough choices, but which adapted to their failures and successes. It added refreshing variety to Call of Duty’s blockbuster gameplay formula, including exciting, new elements for what had become a best-in-class but annually-expensive multiplayer mode.

It’s disappointing, then, that Black Ops 3 abandons all the forward progress of Treyarch’s last effort. Instead of attempting to advance the franchise in clever but logical ways, it flails around, throwing everything it can at players to keep them interested. It’s not all bad — Call of Duty is nothing if not a highly polished set of core mechanics — but it is an unfortunate and misguided step backward for the series.

With Black Ops 2, Treyarch took its branch of the Call of Duty franchise into the near future, concerning itself with the implications of robotics and automated warfare. In Black Ops 3, the subject is transhumanism, the idea of augmenting people to be better, more powerful killing machines, and what they give up as software wired into soldiers’ brains provides them with the ability to hack and control machines — and potentially, to be hacked and controlled themselves.

It’s not long before the protagonist, one whose face and gender can be customized by the player for the first time in the franchise, becomes one of these “cyber soldiers.” After sustaining some catastrophic injuries, they’re enhanced mechanical limbs and a DNI, or Direct Neural Interface, installed in their brain. The DNI is at the heart of the game: it gives players special powers like the ability to shoot microscopic robots at people or hack robots, and also introduces the possibility that the reality the protagonists are experiencing may not be real at all.

Most of the game is spent pursuing Taylor, voiced by Christopher Meloni of “Law & Order: SVU,” and his cyber soldier squad after they apparently go rogue. The story hopes to mess with player perception and to introduce twisted mindscapes to explore and understand, but instead just muddies the plot and fills its weirder locales with the same bad guys as anywhere else.

Zombies delivers as usual, though it’s just as tough to break into and enjoy for players not already bitten, ahem, by the undead bug.

In fact, the campaign in total is a bit of a mess. Black Ops 3 ditches the fascinating narrative experiments of Black Ops 2 and instead leans on a new concept: full cooperative play that supports up to four people. However, Black Ops 3 constantly waffles between being built for one player and for four — it’s not sure if it should try to tell a story of a team or an individual, it’s not sure if it can rely on you to bring friends to enemy encounters, and it’s not sure how to build battles that can work with variable numbers of human participants. The end result is muddled: the dialogue is confused, sometimes assuming there are many of you and sometimes not; the battles are confused, with paths and flanking areas that aren’t particularly useful; and the enemy designs are confused, mostly just going the Destiny route of providing you with bigger baddies that require you to shoot them more, instead of asking you to rethink your strategies.

Where Black Ops 3 tries to add new ideas, it struggles. You’ll go into battle with “cyber cores,” the things that give you special powers to mess with the enemy, like barreling through them at a sprint to send them flying, or incapacitating several of them with a burst of sound waves. But you can’t do everything at once — cores are built into three skill trees, and you have to unlock the abilities and then choose one tree at the start of each mission. Though you can switch back and forth between several abilities on each tree once you’ve unlocked them all, each tree still has particular specializations, which means you get situations where you pick the “Control Robots” tree and find there are actually no robots in the mission, or the “Confuse Humans” tree to find automatons immune to your wiles. There are a couple cores in each tree that cross the gap and points in each mission where you can switch, but it’s easy to find yourself clearing an area, switching cores, and then realizing you chose wrong again and again.

The other changes are movement abilities you can equip, like running on walls and climbing up to high ledges, but as it turns out, they’re poorly utilized in the campaign. You’re not ever going to go flying around a battle, tearing up enemies like the uber-soldier you’re meant to be. Only some arenas even suggest using your capabilities, and then in limited ways. Black Ops 3 has you moving down straight corridors as often as through larger, wider battles. Combine those straightforward portions with enemies’ deadly accuracy and you’ll be playing as you always do: finding cover, picking guys off as they pop their heads out.

All of this comes together to make a rough-feeling, fairly boring campaign mode overall. The plot steers toward what seems like its larger themes and messages — the comment on a world where we give up access to our minds for security against unseen, possibly non-existent threats — and then abruptly veers off into weird sci-fi for sci-fi’s sake. The co-op is just never effective or especially fun. And the cool new abilities all amount to basically the same thing: climb to a new piece of cover, and kill a few guys by waving your hand at them instead of shooting them.

Many of the additions that make an appearance in the campaign mode are better utilized in Black Ops 3’s multiplayer mode, which is as strong and fun as ever. You get all the movement abilities in multiplayer, rather than having to equip them in your loadout as in the campaign, and the gameplay is much better for it. Sprinting through a level, jumping over an obstacle to hit a wall, and running along it to drop into a flanking position carries a satisfaction that Call of Duty doesn’t otherwise achieve.

Rather than creating a generic character as in past CoD’s, Black Ops 3 has players unlock and utilize “specialists,” each with a particular “super” move that unlocks on a timer. One has an attack that kills enemies with a shockwave in a radius around him; another has a bow that fires exploding, one-hit-kill arrows; still another can rewind time slightly to pull himself from danger. Each of the specialists adds a little flavor to multiplayer mode, even if their actual specials attacks aren’t devastatingly useful; you’re as vulnerable as ever and die just as fast in Black Ops 3 as any other Call of Duty, so often as not you’ll be killed while executing that cool thing you’ve been waiting half the match to use.

Still, it’s a breath of fresh air that can change up multiplayer just enough in many scenarios. The movement system gives you some new ways of outsmarting other players and the specials give you new incentives to think about which map you’re playing and which character to choose. Multiplayer is the mode most people come back to each year with Call of Duty, and Black Ops 3 makes a few key expansions to the series’ core ideas.

A Horde of Undead, Twice

Then there’s Treyarch’s signature “Zombies” portion of the game. The team-based arcade mode is, as it always has been, about fighting off progressively tougher waves of zombies while trying to run around maps, completing objectives. Treyarch continues its trend of hiring Hollywood actors for voice and likeness in the mode, including Heather Graham, Jeff Goldblum, Ron Perlman and Neal McDonough, and this one has a film noir theme that lends itself to some great visuals and fun banter.

As always, though, Zombies isn’t for everyone. It has a very dedicated player base that enjoys both the challenge and the intricacy of unlocking all the mode’s secrets while under constant threat. Zombies delivers here as it usually does, though it’s just as tough as it’s always been to break into and enjoy for players not already bitten – ahem — by the undead bug.

One thing Black Ops 3 isn’t hurting for is content. The campaign, multiplayer mode and Zombies mode are all quasi-independent games in their own right, and Treyarch adds more to the mix with “Nightmares,” a mode that unlocks after you beat the campaign and which turns the story from a cyberpunk-esque war story into a zombie apocalypse. It’s not particularly well-executed — the game just mutes its existing cutscenes and adds voice-over narration to lay out a new tale — but it’s a nice, if rough, addition. Zombies tend to appear behind you and if they hit you, you suddenly can’t move, so it’s not particularly fun to play alone. But with friends who like the power-ups and mechanics of Zombies mode, it’s definitely possible to find some appeal.

And finally there’s “Free Run,” a short challenge mode in which players run courses with Black Ops 3’s new movement abilities. Again, it’s a neat addition, but not particularly deep or compelling. The courses mostly highlight how slow and clunky the movement system really is. It’s a momentary distraction that won’t keep anyone’s attention for long.

Black Ops 3 comprises a lot of, well, stuff — some of it strong, some not so much. Its campaign mode feels like a push in all the wrong directions, trying to shoehorn in things like cooperative play and new abilities without really knowing how they fit with its core gameplay. The same goes for the story, which wants to be edgy and weird but winds up disjointed. Multiplayer certainly fares better, and the well-loved Zombies mode seems to get all the creativity and excitement. There’s just not much here that changes things for the better or moves Call of Duty forward as a series, and that’s especially egregious when Black Ops 2 was so inventive with ways to push the envelope while maintaining its essential Call of Duty-ness.

There are fun ideas in Black Ops 3, but more stuff doesn’t necessarily mean a better package. With Call of Duty: Black Ops 3, the distinction between quantity and quality is lost.