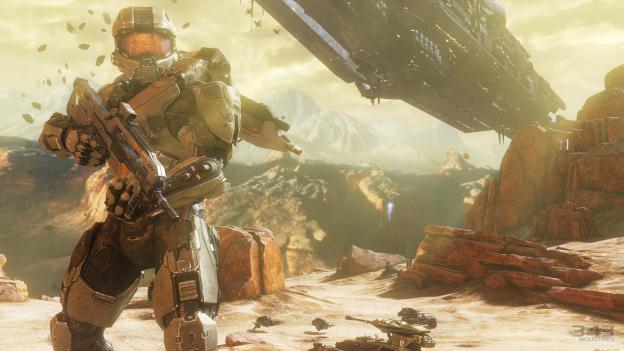 The next generation of Halo is upon us. It wouldn’t be all that unfair to have been nervous about the future of Halo after it was announced that Bungie had gone walkies and left the keys to the kingdom in the hands of a developer that didn’t exist four years ago. But after seeing Halo 4 in all its glory, there is a very good argument to be made that Microsoft’s flagship series is in better hands than ever before.

The thing to remember about 343 Industries is that it is made up of developers that were already passionate about Halo. In fact, you could argue that 343 is made up of the most hardcore Halo developers, those that decided to stick with the franchise even after Bungie announced that it was done with the series. Following that logic, this could actually be the ultimate Halo game to date.

We were given a substantial look at the gameplay of Halo 4 on Monday at the Microsoft press conference, and it grabbed us by the eyeballs and refused to let go. The demo on display began with a live-action look at the UNSC Infinity, the largest and most incredible piece of human technology ever created. The ship measures 3 and ½ miles long, took two decades to build, and contains the best of humanity, 13,000+ of them.

Following an energy-based attack, the ship crash lands on the planet Requiem and immediately faces a new threat to the galaxy. Thankfully, Master Chief is already there and more than willing to massacre anyone that looks at him funny. The enemies this time around are the Prometheans, a defense mechanism of the Forerunners that have been asleep for eons. After awakening, they begin their attack on humanity. Their motives are a mystery, but the threat is clear and present.

The Prometheans are a new type of enemy altogether, more powerful than the Covenant and smarter than the Flood. The Covenant will still be kicking around, always willing to catch a bullet from Master Chief, but the Prometheans will be haunting Requiem with powerful weapons that were designed to annihilate the Flood.

Those that played and beat Halo 3’s Legendary setting will have caught the first glimpse of Halo 4’s setting. After putting himself in a cryo sleep, Master Chief was last seen floating in orbit above an incredible planet covered with technology. 343 claim that the ending of that game is canon, and the story will continue from there five years after the end of the Covenant War. 343 have also been sprinkling bits of the mythology throughout Halo fiction in various mediums for the last few years, so the hardcore fans should be in geek Heaven.

Much of the story is being kept secret, but the campaign is only one piece of the overall story, and just barely the majority of it. Included with Halo 4 at no additional cost is the incredible Spartan Ops.

In a closed door session, we were given a closer look at the new Spartan Ops, which is being described by 343 as being like an interactive TV show, and a new way to experience console games.

Each week a new episode will be released featuring five playable segments of about fifteen minutes each that up to four players can play. Each new episode will begin with a 5 minute, fully animated and voiced segment that will significantly further the plot. This content will be free, and it promises to offer a staggering amount of new supplemental gameplay. The episodes will continue for months and comprise of one “season,” which may mean even more seasons could come in the future.

The objectives of these game modes will constantly change. In the demo shown at E3, the Covenant had set up camp on Requiem and were looking for an ancient god. Following an intense battle against both the Covenant and the Prometheans, a mysterious object was discovered and taken back to the Infinity. That object will return in the next segment and continue the story. The Spartan Ops content drops will begin with the launch of Halo 4 on November 6.

Each player will also have the option to select their loadout, featuring their own weapons and abilities. This loadout will carry through into the online multiplayer, which will also be accessed through the Infinity hub, just as the Spartan Ops wll. The competitive multiplayer, dubbed “War Games,” will also be folded into the overall story, and the competitive modes will be presented as a simulation that UNSC members engage in on the ship.

Halo 4 was already shaping up to be one of the best games of the year, and that was before we heard that the game would be updated with hours upon hours of additional–and free–content. And that isn’t even counting the multiplayer. Wow. Just wow.

Everything we know about Halo Infinite