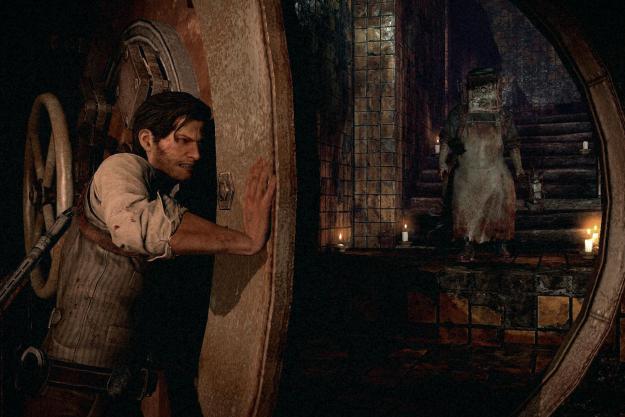 The Evil Within
MSRP $60.00
Score Details

“The Evil Within is almost pitiable in its need to recapture the fresh tension and anxiety of Mikami's best work.”

Note: There are some spoilers for The Evil Within in this review.

Late, great stand up comedian George Carlin regularly riffed on what he called the “virgin high,” the first time someone has an intense experience. Carlin said that every time someone repeated that intense act, whether taking a drug or sky diving or even having sex, part of them was always chasing the original high, trying to recreate that state of sudden, new bliss.

Shinji Mikami is chasing his own virgin high in The Evil Within, a new horror game and the first from his studio, Tango Gameworks. Comprised almost entirely of recycled parts, from his own games and other staples of the horror genre, Within is almost pitiable in its need to recapture the fresh tension and anxiety of Mikami’s best work.

While there’s potential in Within’s setting, it’s devoid of mystery or original structure.

From the cramped over-the-shoulder perspective to the tour through dingy industrial decay, rotting rural villages, and forbidding medical facilities, the game mimics Resident Evil while seemingly misunderstanding why those games were so fun to play. That’s the greatest tragedy here. Lack of originality isn’t necessarily a sin. Resident Evil was practically a remake of the NES game Sweet Home, which Mikami himself helped make. Reinvigorating old ideas requires style and expert execution, though, and both are missing in almost all parts Within.

Take Detective Sebastian Castellanos, the hero tortured by family tragedy that you’re controlling throughout Within‘s approximately 16-hour story. He’s a cipher, scarcely reacting to anything that happens around him. When reality starts crumbling around him after he, alongside fellow detectives Joseph and Kidman, heads to a sanitarium controlled by an unknown homicidal maniac, he doesn’t react in any meaningful way.

Old Seb is just as shocked when he’s dragged into a basement by a chainsaw-wielding hulk as when he inexplicably tumbles down a seemingly bottomless pit, only to wake up in a hospital bed. “I feel like I’m losing my mind,” he says stupidly, again and again. He’s as blank as the leads in Konami’s surrealist Silent Hill games, a series whose influence also looms large over Within, but his circumstances never mirror any kind of personal journey.

We’re told about Seb’s tragic past in chunks of text dotted around the game’s cumbersome save points–you have to visit a whole hub space in order to save and level up various attributes using green juice found throughout each stage–rather than having him demonstrate any kind of personality. The Silent Hill games work more than they don’t because horrific circumstances inform and reflect on what you know of the protagonist; in The Evil Within, character development is treated as an info dump.

Early on, Within implies that it’s going to favor stealth. Seb can run short distances and kick open doors, but that makes noise, drawing the attention of the game’s slimy, bright-eyed zombies. Crouching, throwing bottles to draw zombie attention, and hiding under beds or in closets seems to be the best method to conserve the scarce resources that are available. Between that and the cumbersome pace at which you develop Seb’s skills and weapons, stealthy play immediately makes sense.

The Evil Within too quickly abandons the quiet approach in favor of open combat.

Unfortunately, The Evil Within too quickly abandons the quiet approach in favor of open combat. Most stages funnel you down a single path into the sort of arenas that were common in Mikami’s nearly decade-old masterpiece Resident Evil 4. Dark nighttime villages, bizarre multi-tiered brick areas with no ceilings that look like old, homemade Counter Strike maps, and claustrophobic catacombs with spike and fire traps recur throughout, and most prove irritating.

It doesn’t help leveling Seb’s skills up seems to have very little impact on his survivability. Even with maxed out health and powerful healing syringes to lean on in a pinch, he still dies after just two or three injuries. Upgrading Seb feels like a distraction more than anything else, just something to pad out a game that is frightfully lacking on multiple levels.

Gunplay is woefully imprecise, making accuracy – the rare helpful upgrade – an expensive must-purchase for each gun. Even then, a zombie can be right next to you but a pistol shot may still miss. Setting a zombie on fire with a match, what should be an efficient quick kill, sometimes sets nearby enemies on fire and sometimes it doesn’t. Combat rules feel arbitrary. It would be one thing if awkwardness like that was used to instill a feeling of helplessness, but nothing about the character or enemies reflect that; Within just feels broken.

Worst of all is how Sebastian himself obscures the action. It’s the same over-the-shoulder perspective as Resident Evil 4, but Seb takes up about 13-percent more screen real estate (about two extra vertical inches measured on a 52-inch LED screen) than the earlier game’s Leon Kennedy. It’s hard to take in the scenery, or see that giant demonic dog jumping out of the bushes, when the hero’s taking up so much space.

Just because there’s a near constant focus on combat, that doesn’t mean a game can’t build up good atmosphere through disturbing visuals and spectacular set pieces. While there’s potential in Within‘s setting, an ever-shifting nightmare landscape conceived in a mad scientist’s mind, it’s devoid of mystery or original structure.

Note the laundry list of tired tropes: Chainsaw maniac, dank mental hospitals full of antique wheelchairs, spider-walking demon ladies, creepy villages, zombie dog, a wave of blood pouring out of a doorway. There’s a hospital ward full of creepy baby dolls for crying out loud! Were there a sense of humor at play, these familiar trappings might feel like homage or meta-commentary on the genre, but the game’s ceaselessly self-serious façade is impenetrable.

Mikami comes close to flat out remaking his virgin high at the end of Within‘s second third. Chapter 9, baldly named “The Cruelest Intentions,” takes place in villain Ruvik’s childhood mansion, which looks almost identical to the foyer in Resident Evil‘s Arklay Mansion. Here, Seb can actually explore around rather than trudge along the linear route from hallway to arena. As you explore a piano-equipped gallery, a dark library, and a network of secret passageways, you’re solving a grotesque puzzle, one of just a few in the game, probing exposed, seemingly living brain tissue in severed heads. It’s gross and awesome.

The result is a macabre and anxious sequence that culminates in a psychotic disintegration of the mansion walls, as it warps into something not just strange but impossible. For a brief moment, more than eight hours into the game and following a handful of other, smaller inspired scenes, it really does seem like Mikami might rekindle that original flame. Then Chapter 10 is an impossibly frustrating gauntlet of stupid boss fights and trap rooms in which you literally can’t see the way out because Sebastian is blocking the solution.

Resident Evil was a game about managing weakness and warped perspectives, trying to stay as strong as possible as a mystery culminated to a dramatic confrontation. Resident Evil 4 was about encroachment, putting you behind the shoulder of an action star as monsters breathed down from the other side of his neck. As for The Evil Within, it’s a game that seemingly aims to bottle lightning a second time, and fails spectacularly.

This game was reviewed on a PlayStation 4 using a disc provided by Bethesda Softworks.

Evil West: release date, trailers, gameplay, and more
Alone in the Dark: release date, trailers, gameplay, and more
BioShock Netflix film unites Logan and I Am Legend talent
How to pre-order The Callisto Protocol: retailers, editions, and bonuses
How to get Star Coins fast in Disney Dreamlight Valley
Sony says collaboration with FromSoftware could go beyond games
Take advantage of this GameStop trade-in deal and upgrade to a PS5 for less
A new Witcher trilogy and Cyberpunk game are in development at CD Projekt Red
FIFA 23 career mode guide: Lead your team to glory
Title of new Need for Speed game leaks ahead of Thursday’s reveal
Build out your game library with GameStop’s video game sale, live now!
Every video game delay that’s happened in 2022
How to make money fast in Cyberpunk 2077