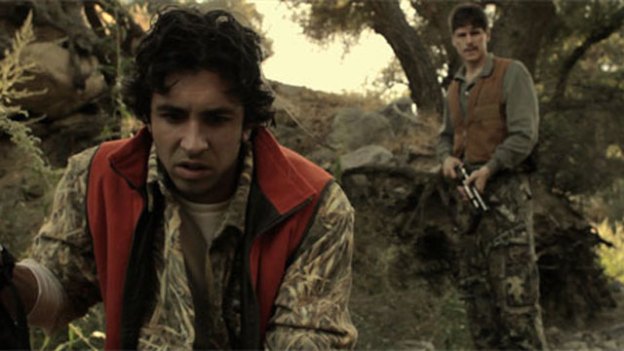 You know, when you think about it, that dog in Duck Hunt was a jerk. Always running away with the ducks, he was — and laughing, always laughing.

Still, we never realized how evil he truly was until we saw the opening entry in G4 Films’ Epictober Film Festival: The Hunt.

A dark, bloody take on the classic Nintendo light-gun shooter, The Hunt follows two hunters whose quest for game brings them face to face with a savage beast bent on slaughter. You can watch the 10-minute film below to get in the Halloween spirit (note: this video features some gory effects and at least one obscenity that definitely wasn’t in Duck Hunt):

The Hunt is directed by Sam Balcomb, and kicks off G4’s three-film series that continues tomorrow with director Drew Daywalt’s Kart Driver (guess which game that film is based on!) and concludes with Gregg Bishop’s The Birds of Anger.

No joke, we’d love to see an entry in the festival based on Donkey Kong. Just imagine the possibilities!

Topics
5 ways video game adaptations can learn from The Last of Us
Forspoken cloaks: all cloak locations and abilities
Samsung’s crazy rotating 4K gaming monitor is $700 off today
How to overclock Intel’s Arc GPUs for better performance
WWE 2K23 improves the wrestling sim with subtle tweaks and a bit of chaos
Meta Quest Pro VR headset is $400 off (and save on Meta Quest 2)
How to change classes in Fire Emblem Engage
Fortnite: How to collect Dragon Balls on Adventure Island
How to get all Emblems in Fire Emblem Engage
Fire Emblem Engage bond levels: how to get max Bond Levels fast
Marvel Snap Battle Mode: How to play Marvel Snap with friends
Best Gaming PC Deals: Save on RTX 3070, 3080, 3090 PCs
The best video game remakes reinvent the classics, they don’t just revisit them