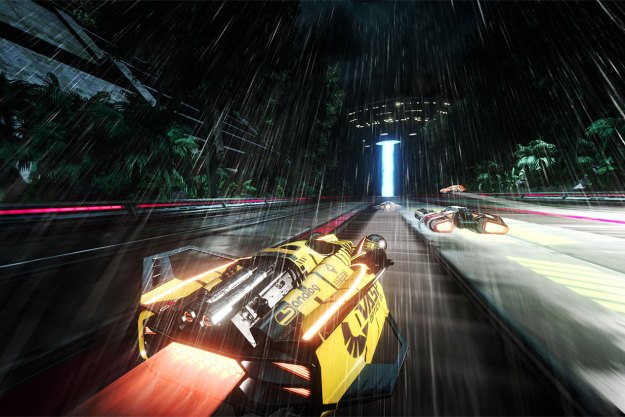 After a flurry of boosts, we’re careening down a dip in Cameron Hills, a raceway perilously suspended in the stratosphere. We’re propelled into a semi-enclosed underpass lined with three boost pads: orange, blue, orange. With no time to think, our ship fizzles, losing speed as we cross the orange pad. Before we even reach the second pad, six ships whizz past me.

The constant threat of going from the podium ceremony to the back of the pack in a split-second harks back to nerve-wrecking sessions of the Nintendo sci-fi racing series, F-Zero. While it shakes things up just enough to attain an identity of its own, it’s hard to avoid seeing that storied series in Fast RMX’s perpetual adrenaline rush and zany track design.

That isn’t the only reason it might seem familiar: Fast RMX is actually an enhanced version of Fast Racing Neo, a 2015 Wii U eShop game. RMX features 14 new tracks, bringing the total to 30, and new versions of its original tracks. Yet Fast RMX feels more like the third leg of developer Shin’en Multimedia’s homage to high-octane sci-fi arcade racers, than a remix of old content.

Like F-Zero, Fast RMX excels as a futuristic anti-gravity racer that stresses quick reflexes, speed, and forethought of your surroundings. Fast RMX’s screaming pace requires your unblinking attention, and it earns every moment that it holds you.

Up the speed, up the fun

All great arcade racers, particularly those in the F-Zero and Wipeout vein, hinge on amplified, unceasing speed. Fast RMX is no slouch in this department. Even when keeping a nominal pace, your ship barrels forward at dizzying speeds. Precise, slick controls keep the pace from becoming unruly.

Fast RMX resonates the most when you are, well, going fast. Thankfully, the game boasts 60 FPS in both console and handheld mode, and even at expert speed, there are no noticeable framerate drops.

Adding a layer of complexity, elongated blue and orange boost pads are scattered all throughout each course, adding an Ikaruga-style color matching component. Your ship has to match the color of the pad to kick you into overdrive. If you clash orange with blue, the boost pad will have the reverse effect, taking the wind out of you instead.

The orange and blue dichotomy also extends to the orbs that fill your boost meter. The orbs switch colors, filling your tank when you nab one that aligns with your ship’s color. As the speed heightens, knowing when to manually give your ship an extra push in the claustrophobic tracks is paramount.

The mechanic, which has been featured in everything from platformers to shoot-em-ups, feels at home on the racetrack. The constant switching, while searching for pads and power-ups, makes the game feel like a more active experience. Plus, it’s rather fitting that the most defining mechanic of the Switch’s first racing game literally involves a seamless “switch” of ship phases.

Stringing together that perfect boost chain is rewarding in itself, but the gameplay is generously complemented by a wide array of levels, each of which feels markedly different than the last. The eclectic library makes each of these courses a new experience — Parts of the track are in perpetual motion, and there are numerous obstacles to avoid, from boulders, to death rays, to bizarre four-legged mechs.

Many courses are fragmented, requiring you to glide across open air, and align yourself with the next section for a safe landing. Occasionally, color-specific gaps and barriers stand in your way, and if your ship doesn’t match you’ll crash. If that isn’t enough speed and tension, many tracks feature some risky shortcut, which require a perfectly timed boost and a leap of faith off the track.

Every track features mercilessly sharp turns and elevation changes, but even tracks that don’t have, say, breath-defying jumps, separate themselves by setting. From shiny, futuristic skylines to forests to desert terrains to snowy mountains, Fast RMX takes you across the world and beyond. There’s also shifting weather conditions such as rain and dust to account for, and intermittent threats of falling off the road to always be conscious of.

Mostly a one trick pony

While blinding riveting speed and excellent levels feel great, they cannot hide the fact Fast RMX doesn’t have the robust feature-set to keep the magic alive for long.

Each of the 30 tracks feels wholly unique.

The main mode, Championship, contains 10 cups with three tracks a piece. As you notch victories at novice difficulty, advanced and expert formats unlock, as well as new ships — 15 in all. Once you get the hang of the speed, you can try Hero Mode, an expert test of endurance that ends your run if you hit too many walls.

While these modes are satisfying, it’s strange to see an arcade racer in 2017 without a quick race option. When flying solo, you only have the option to compete in cups or die a thousand deaths in Hero mode. This means that if your favorite track is the last leg of a cup, you’ll have to play the other two courses first. There’s no other way around it.

Alone on the track

Similarly, Fast RMX’s multiplayer varies wildly depending on which of the Switch’s many controllers you decide to use. While you and a friend can compete using the console’s individual Joy-Cons turned on its side, doing so restricts both players to six buttons and one analog stick, causing inadvertent inputs that are hard to overcome in a game that stresses precision.

This isn’t a problem if you have extra Joy-Cons or a pro controller, in which case you can play with multiple full-sized controllers. Better yet, with two Switches you can connect and play over over a local network.

Even under the best of circumstances, though, the game’s online multiplayer offering feels bare-bones. Online races feature 2-8 players, with only one game mode: quick play.  There is no lobby, matchmaking, or method for playing with friends, and there’s no rewards or skill system to track progression, save for a points system that is meaningless because of the absence of leaderboards. (This could be related to the Switch’s generally lackluster online infrastructure).

It isn’t often that a racing game is more engaging as a single player experience, but here we are.

Fast RMX offers consistently satisfying anti-gravity racing, and its diverse course design catapults it to the upper echelons of the F-Zero umbrella of racers. Fast RMX adds a layer of simple, yet effective depth, making it a worthy, if light addition to the pantheon of arcade racers for both casual gamers and those looking for a challenge.

No. until Mario Kart 8 Deluxe launches in April, 2017, Fast RMX is the only racing game on the Switch. Further down the road, a second F-Zero-style racer, Redout, will come to the Switch later this year. Wipeout: Omega Collection will deliver a similar experience to PS4 in 2017 as well.

Depending on your skills, the Championship series should keep you occupied for 5-10 hours, and the ridiculously challenging Hero mode should keep you going for quite awhile. If you have extra controllers, split-screen multiplayer is also worth a few hours of your time. There are also plans for adding a time trial mode and the ability to race with friends online post-launch, which would increase the game’s online potential.

Yes. Racing fans, and particularly F-Zero fans, should take Fast RMX for a spin. It’s one of the best launch games for Switch and it’s only $20.

Topics
Best PS5 Game Deals: Elden Ring, NBA 2K23, Sonic Frontiers, and more
Minecraft Legends: Release date, trailers, gameplay, and more
Over 100 PlayStation VR2 games are in development, Sony says
Forspoken cloaks: all cloak locations and abilities
Best Gaming PC Deals: Save on RTX 3070, 3080, 3090 PCs
The best video game remakes reinvent the classics, they don’t just revisit them
Best Buy will give you a $10 to pre-order Hogwarts Legacy today
Save $620 on this Lenovo gaming laptop with an RTX 3070
AMD vs. Intel: which wins in 2023?
Forspoken settings: change these settings for a better experience
Add 2TB of storage to your PS5 with an SSD and save $70 with this deal
Fall Out Boy concert in Fortnite: start time, island code, and more
Marvel Snap is dangerously close to becoming a pay-to-win game