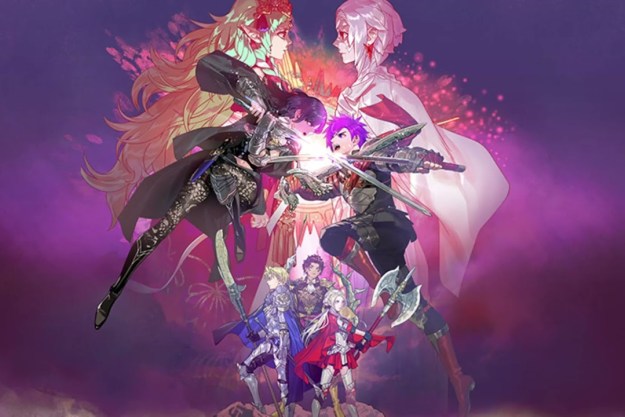 “As long as you're OK with the usual Musou repetition, Fire Emblem Warriors: Three Hopes is a worthy follow-up to Three Houses.”

Most Fire Emblem games revolve around some form of war, but Fire Emblem Warriors: Three Hopes may be the series’ most convincing conflict yet. That’s partially due to the fact that it’s a loud and proud Musou game where players chop down thousands of troops. But it’s more so because it doesn’t throw away what makes Fire Emblem so engrossing while doing it.

While it would be accurate to call the game a spinoff of Fire Emblem: Three Houses, that’s selling it short; it’s a full-fledged sequel, just played in a different key. Three Hopes doesn’t have the series’ signature turn-based tactics, but just about everything else is there amid its flurry of Dynasty Warriors-sized action. With no expenses spared when it comes to the mainline series’ RPG hooks, developer Omega Force creates an action game that still makes players feel like a five-star general.

Though it’s still at the mercy of the inherent repetition that comes with the Musou territory, Fire Emblem Warriors: Three Hopes is another victory in Nintendo’s hot spinoff streak.

If you played 2017’s Fire Emblem Warriors, your expectations might be low here. That was more of a Dynasty Warriors game wearing a costume than it was a Fire Emblem title. That’s not the case here. Just about every single aspect from Fire Emblem: Three Houses has been adapted in some form here, with the exception of fishing (a damning omission, I know). Players still train troops in classes, outfit them with abilities, forge weapons, cook meals, complete paralogue missions, and much more. It’s a high-effort project containing just as much depth as Three Houses.

As such, I feel confident calling it a full sequel that fans of the tactics game should play. It once again drops players into the land of Fódlan, which is embroiled in a complicated war between factions. Like Three Houses, players pick a path at the top and see the war unfold from that house’s perspective. For those who only played Three Houses once, it’s a great excuse to pick a new house and learn more about the game’s eclectic cast of characters without replaying a 50-plus hour tactics game. I went with Black Eagles this time and came out with a whole new batch of favorites (friendship with Ignatz over, now Bernadetta is my BFF).

What makes that work as well as it does is that Omega Force spares no expenses when it comes to building characters. Like Three Houses, there’s a full suite of fully voiced support conversations that deepen the relationships between heroes. Even after going through hours of chats with characters previously, I was fully engaged with the new sub-stories that emphasize how charming the cast is.

Notably, Three Hopes still retains its predecessor’s entertaining social aspect. In-between battles, players explore a small camp and spend activity points to cook, do chores, or go on expeditions (tea time 2.0) with troops. In addition to that, though, players also collect resources that are used to upgrade facilities around the camp. With all those extra progression hooks, Three Hopes goes well beyond the usual Musou call of duty. The big battles are only one piece of a full RPG with lots of rewarding systems to sink into.

It’s a strong evolution for Nintendo’s newfound love of the genre. The company has found a smart way to expand its most beloved universes without dedicating resources to another mainline installment that just repeats its predecessors’ greatest hits. It worked for Hyrule Warriors: Age of Calamity, which digs deeper into the world of Breath of the Wild, and it might even work better here in some respects. For folks who played Three Houses, it’s like a new season of TV to watch. For those who didn’t, the extent to which it adapts the original game to a new form makes this a perfectly good standalone story.

Repetition comes with the territory

Of course, there’s one major difference between Three Houses and Three Hopes: The former is a turn-based tactics game and the latter is an action-packed hack-and-slash title. Whether or not you’ll click with it primarily depends on how much you already like Musou games, as the core gameplay of Three Hopes isn’t as complex as, say, Age of Calamity.

The basic idea is that players pick a few troops at the start of each battle and complete a set of objectives. Those usually involve slicing up hundreds of soldiers at once with combos while moving around a map and capturing strongholds. Missions are laid out in a board game-like map that’s filled with sidequests and opportunities to acquire resources. Each chapter builds to one long mission with major narrative implications.

It’s undoubtedly repetitive, with a lack of variety when it comes to both environments and objectives, though that comes with the territory. It’s a genre that’s built around excess and with a single campaign lasting 40 hours, you’re going to do and see the same things a lot.

I feel like a tactician directing traffic in battle, which is almost more fun than actually swinging a sword.

Fortunately, Three Hopes does have a few ways of counteracting that. Any character can be classed out in any way and outfitted with abilities, spells, and gear that tweak their utility. By the end of the game, I found myself frequently rotating characters in each battle as I anticipated what enemy weaknesses I should target. Pretty much every class plays the same from a mechanical perspective (spam X and Y for combos, A for a super move, etc.), but the satisfaction comes more so from how well you can prepare for any given battle.

In that way, Three Hopes actually retains the tactical DNA of the series despite being a real-time action game. While I can only ever rotate between four troops, some longer missions allow me to bring in more as NPCs. Using the map, I can issue commands to any character to have them defend positions or attack specific enemies. Playing side missions also lets players unlock strategic tactics that can be activated in main missions, like having troops construct a handy bridge or enacting a plan to recruit a key enemy. In those moments, I feel like a tactician directing traffic in battle, which is almost more fun than actually swinging a sword.

Though, as always, the simple pleasure of a Musou game is the power fantasy of slicing up an entire army with big, exaggerated animations. Three Hopes delivers on that front, especially when it comes to its flashier special spells and side powers that turn characters into human wrecking balls. But I still wish there was a little more brain power involved, as even the game’s big boss fights against humans don’t feel much different than taking down a lowly stronghold captain. It’s a somewhat flat experience that doesn’t offer up too many unique ways to test your troops.

Fire Emblem, through and through

What’s perhaps most surprising about Three Hopes is that it’s still a full RPG. Characters have stats that rise through leveling up and there’s several layers of customization on top of that. For instance, each weapon has its own stats and skills that can be raised via a blacksmith. For those who love tinkering with builds, Three Hopes offers a wealth of systems to toy around with.

This is a Fire Emblem game through and through — and a strong one at that.

In general, there’s an impressive level of flexibility to the game. That’s apparent right from the jump when it gives players the options to either play with or without permadeath turned on, a key feature of the Fire Emblem series that’s a welcome addition here. Permadeath ratchets the stakes sky-high, totally changing the tension inherent in the usually carefree genre. There’s also an option to make the game more fluid by reducing the number of pop-ups, an especially useful feature that better welcomes replays.

The more I played, the more I began to realize that Fire Emblem’s fine-tuned tactics aren’t what draw me to it. There are so many systems that make the series shine, all of which work in tandem with one another. You can see that at play in Three Hopes, as it still captures the spirit and energy of a Fire Emblem game perfectly despite being as polar opposite as can be when it comes to pace. Same battalion, different formation.

At the moment, Nintendo is rumored to be working on its next mainline Fire Emblem game, which will move away from the world of Three Houses. Before playing Three Hopes, I might have been a little sad about that. Fódlan is such a rich setting and I was itching to spend more time in it with my old friends. With my first playthrough clocking in at 40 hours, Three Hopes allowed me to get that extra closure without it feeling like a rushed reskin of another game. This is a Fire Emblem game through and through — and a strong one at that.

Fire Emblem Warriors: Three Houses proves that Nintendo is serious about its Musou spinoffs. This is a high-effort hack-and-slash that convincingly functions as a full-fledged sequel to Fire Emblem: Three Houses. While its core action gets repetitive due to a lack of overall variety, there’s plenty of familiar RPG hooks around it that keep the adventure engaging. For those who want a good reason to revisit the land of Fódlan, Three Hopes is much deeper than a reunion special.

My Black Eagles run took 40 hours. Multiply that by three and you still won’t have seen everything there is to see between story beats, support conversations, and more.

Yes. Fire Emblem Warriors: Three Hopes’ marketing is being oddly modest; this is a worthy sequel to Three Houses.

Fire Emblem Warriors: Three Hopes was tested on a Nintendo Switch OLED in handheld mode and on a TCL 6-Series R635 when docked.