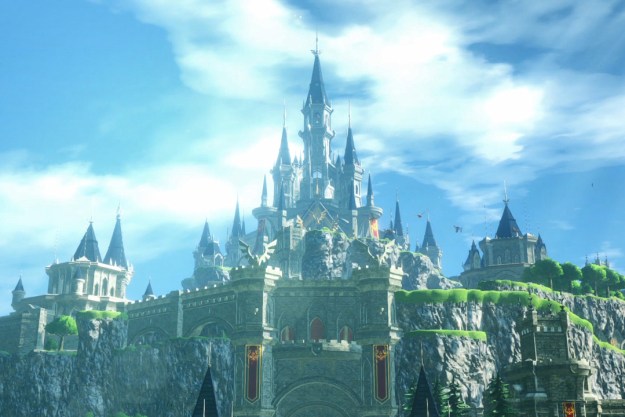 Hyrule Warriors: Age of Calamity is the first Zelda game that’s actually about Zelda. Despite the fact that the series is named after her, the princess has played second fiddle to the iconic Link for nearly 35 years now. Nintendo’s latest game finally gives her the spotlight she deserves and shows fans why she really is a legend.

It’s ironic that the crucial character development happens in a side game that doesn’t even bear her name, but Age of Calamity is much more than your average spinoff. Building off of the first Hyrule Warriors’ dedication to larger-than-life battles  à la Dynasty Warriors, the action game is treated with the same level of care and thought as a mainline Zelda title. It’s billed as a proper prequel to The Legend of Zelda: Breath of the Wild — and it’s clear that Nintendo didn’t take that pitch lightly.

Hyrule Warriors: Age of Calamity is the new gold standard for video game spinoffs. It more purposefully uses large-scale combat to weave a high-stakes Zelda tale that’s among the most engrossing stories to come out of a Nintendo property.

A Link to the past

Age of Calamity tells the story of the great war that plunged Hyrule into darkness 100 years before Breath of the Wild begins. With the aid of a time-traveling droid, Princess Zelda puts together a crackerjack team of Hyrule’s finest warriors to try and prevent the inevitable rise of Calamity Gannon. The genre is a perfect fit for that setup, making the war actually feel as grand as it’s described.

Link may be the first character in the character selection screen, but Zelda herself is the real star. The story largely focuses on her insecurity as a leader during a kingdom-ending crisis. Even her move set is clumsy compared to other characters, as she haphazardly tosses out bombs and ice blocks while Link confidently slashes through crowds. Her redemption arc is more emotionally impactful than anything the Zelda series has offered in the past, making it a standout Nintendo narrative.

The story is largely told through fantastic cutscenes that feel as polished and detailed as an animated film. Characters come to life in a way that even Breath of the Wild didn’t accomplish, and the cinematic clashes are genuinely thrilling. I never used to think Zelda could work as a TV show or movie, but Age of Calamity makes the most convincing case the series has ever put out.

Part of the reason it works is because of its source material. Breath of the Wild might be best known for its creative spin on open-world design, but it’s easy to overlook how charming its worldbuilding and characters are. Age of Calamity amplifies all of those strengths, retroactively bringing more depth, history, and stakes to the game.

I never used to think Zelda could work as a TV show or movie, but Age of Calamity makes the most convincing case the series has ever put out.

One key example of that comes from the divine beasts, the massive robot animals that play a central role in both games. Breath of the Wild hypes up how all-powerful they are, but mostly uses them as elaborate puzzle dungeons. Age of Calamity actually pays off that lip service by letting players pilot the beasts and mow down literally thousands of enemies in seconds. The game is filled with “show, don’t tell” moments that enhance Breath of the Wild’s world without trampling its mystique.

Nintendo’s own Zelda team worked much more closely with Koei Tecmo on the game to create its story elements — and the more hands-on approach shows. While the game requires a working knowledge of Breath of the Wild to truly appreciate its strengths, Age of Calamity offers a level of dramatic weight that’s rare in Nintendo games.

It’s important to set the right expectations for Age of Calamity’s gameplay –it’s still very much a Dynasty Warriors-like musou game first and foremost. That comes with all the good and the bad that the genre has to offer. Combat is wickedly satisfying, but repetition is baked into its core. Players will slash tens of thousands of enemies down, repeat objectives over and over, and mash the same two buttons until their fingers get sore. Anyone who’s not already bought in on this kind of game isn’t likely to find a revelation here.

Anytime I found myself starting to get tired of the battles, I’d unlock another character who would immediately reignite my interest.

Age of Calamity does an exemplary job of keeping combat fresh up to the very end of its 20-hour campaign. The secret to its success comes from its focus on character above all else. There are 18 playable heroes in total, who are steadily unlocked as the game progresses. Anytime I found myself starting to get tired of the battles, I’d unlock someone new who would immediately reignite my interest.

The game takes an almost Super Smash Bros. approach to character design. While the basic attacks and buttons are the same for every hero, each one has their own specific quirks that make them feel special. Impa can create clones of herself to slash more enemies at once, while Revali can launch himself into the air and rain arrows down from above. Differences like that add a layer of experimentation to the game every time players unlock a new character, turning repetitive objectives into a fun combat playground.

Runic abilities play a huge role in combat, which is the game’s most significant change from the first Hyrule Warriors. Each character can throw bombs, freeze enemies, grab metal objects, and create ice walls to counterattack enemies, adding surprising variety to the standard light/heavy attack combat loop. What’s more, the way the abilities work changes from character to character, which gives players another compelling reason to switch things up every mission and see what kind of damage they can cause.

That’s only the tip of the iceberg when it comes to the lengths the developers went to in order to keep combat ever-changing. Different weapons can completely change move sets, each character has a special ability on the right trigger that’s entirely unique, and new combos are steadily unlocked through the story. There’s a staggering amount of options to play around with, successfully proving that there’s more than one way to skin a Hinox.

Pushed to the limits

At first, Age of Calamity looks slimmed down compared to the original Hyrule Warriors. The Wii U release featured a menu full of game modes that took more than 200 hours to fully complete, while the new game has one core story mode. The light veneer turns out to be an illusion as the game is actually jam-packed with content.

The game uses Breath of the Wild’s map as an overworld screen that displays every mission, subquest, and unlockable item available. The map fills up with icons throughout the adventure, which gets downright daunting by the end. Having every objective in one place is a huge improvement over the comparatively disorganized Hyrule Warriors. There’s still a lot to do, even if most of it revolves around more slashing, but it’s a less excessive offering that’s easier to navigate.

With all that content, Age of Calamity really pushes the Switch to its limits. It’s a huge game that’s not without its share of technical flaws. Crazy combos can cause the frame rate to temporarily plummet to the speed of a slideshow. Even weirder, sometimes the game inexplicably doubles in speed, looking like a movie stuck on fast-forward.

Multiplayer especially takes the brunt of the technical pain. The game features two-player split screen, which drastically drops the game’s performance to a comedic degree. That’s a shame, because it offers a truly enjoyable couch co-op experience that rewards friends who can coordinate and execute a battle plan.

Crazy combos can cause the frame rate to temporarily plummet to the speed of a slideshow.

To its credit, the game never crashed on me once, even when it felt like my Switch was about to explode. It always made it out of a stutter unscathed and bug-free. In some ways, the stutters almost feel like a badge of honor that lets players know they’ve pulled off a seriously devastating attack. It’s not ideal, but at least it’s not game-breaking.

Like Zelda herself, the game can at times feel like it’s in over its head in a battle against technology. That’s part of the fun of the genre, though. Musou games take big swings to make players feel like an unstoppable force of nature. In spite of all of its stutters, Age of Calamity successfully brings Hyrule’s great war to life and lets the champions live up to their title.

Hyrule Warriors: Age of Calamity sets the bar for both Nintendo spinoffs with A+ storytelling that enhances Breath of the Wild’s world and deceptively varied, character-driven combat. It’s still a Dynasty Warriors game at heart, for better or worse, but the game makes that feel like less of a backhanded caveat and more of a fresh start for a polarizing genre.

The Legend of Zelda: Breath of the Wild is still king, but Age of Calamity might be the best, and most accessible, musou game out there.

The campaign with a healthy dose of side missions is north of 20 hours, but it’ll take double that to hit 100%.

Yes. If you loved Breath of the Wild, it’s an excellent companion piece that retroactively adds stakes to the experience.