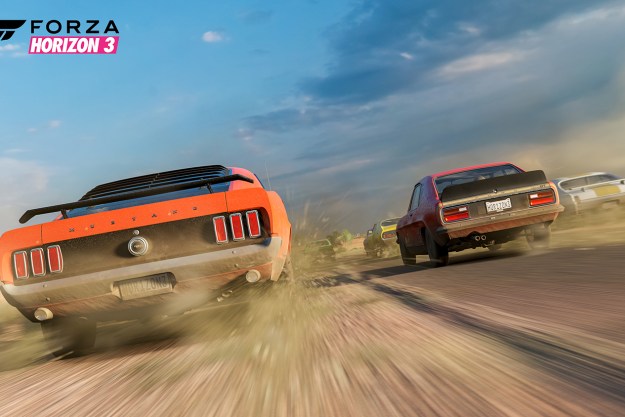 “Forza Horizon 3 captures the joy of driving, without the hassle of ownership.”

One of the first things you do in Forza Horizon 3 is race a helicopter. Underneath this helicopter, hanging by cables, is a Jeep. Which you’re also racing.

Forza Horizon 3’s finely tuned focus is on the fun of going fast, and everything in its open-world package is built on supporting that focus. The open-world, car-packed driving series is again built around the Horizon racing and music festival, except this time, you’re the owner, chief creative director and star attraction of the show. That means you get to race a freight train while also jumping over it, among many other things. The show goes on forever, taking place across landscapes ranging from cities to the Outback to the rainforest, offering 350 cars to take you wherever it is you want to go, as fast as you want to get there.

That makes Forza Horizon 3 a fantastic racing game for the casual racing fan. For a player new to the series — as I am — it presents a giant pile of driving activities to dig through. Anything that might stall or bore can be instantly replaced with something else. The mandate is merely to complete: As you finish events, you earn fans, and as you earn fans, you expand the festival to open up more events. Even between races, there’s rarely a moment when Forza Horizon 3 puts any barrier between you and fun.

If you want a more intense racing experience, though, you can create one — right down to setting up your own courses and challenges for yourself and friends. If you want tougher competition, you can head online. And if you just want to do donuts through city streets and crash through open bodies of water, there’s plenty of opportunity. Forza Horizon 3 is very much a game in which you get out what you put in.

There isn’t any one thing that Forza Horizon 3 does that makes it really stand out. We’ve had open-world driving games for a while now, to say nothing of two previous Horizon games, and the formula of vast maps full of a variety of events works as well now as it ever has. But in putting together tons of little things, Forza Horizon 3 creates an extremely easy going, accessible racing world. The whole becomes greater than its parts.

For the start, the open world is littered with things to do, but they’re doled out slowly. The Horizon festival starts in one place, with a few events scattered around it, along with one-off “PR Stunts” — jumps, drift challenges, speed-tracking cameras. Completing any of these earns players money to buy new cars, along with experience points that provide player progression by unlocking a variety of perks. Win over enough fans and you can expand the festival to a new location, or increase the size of an existing one, unlocking more events.

Actually completing events is also presented in a quick, easy way. You drive to the spot for a race, hit the go button, and you’re racing. In the actual event, Forza gives you your racing line and your rewind feature, allowing you to see the ideal way to play the course and to undo costly mistakes. If you want to add more challenge, you can turn those off. If you don’t like how you placed, you can run the race again, or buy a new car to try a different tact.

You can also yank in up to four friends to play through all these races and events, allowing you to turn the open-world gameplay of driving around finding stuff and completing things into a team effort. Everything you discover in co-op (and in the competitive online Adventure mode) gets tracked back in your single-player game, making playing online an extremely easy way to add a new dimension to your game with low hassle.

Even the hunt for the game’s huge number of collectibles is tuned to be fun without grating. If you sight, say, a destructible billboard that earns you an experience bonus for driving through it, it’s added to your world map, even if you didn’t actually find and mark it yourself. Recruitable “drivatars” — AI cars based on players on your friend list — pop up periodically on your map for you to chase down and race, as do “Barn Finds,” spiffy classic cars hidden out in the landscape.

Forza Horizon 3’s developers want you to go out and explore its world, but they recognize that world is enormous. Nobody wants you to get bored or frustrated as you plow through jungle or cover vast stretches of desert searching for little collectibles or things to do. There’s even an unlockable “drone mode” that lets you fly around the world map, marking collectibles and the like on your map.

None of these features are revolutionary. Race lines are nothing new. Rewinding to avoid crashes isn’t a fresh idea. Seamlessly jumping between online and offline modes hasn’t just been invented. But Forza Horizon 3 gathers all those good ideas together and tweaks them just enough to make for an incredibly chill driving experience.

The pros and cons of ‘casual’

In fact, Forza Horizon 3 might be a little too chill.

The relaxed nature of the game makes it feel as though it pulls its punches. It’s nice to be able to bail on any event in order to play something you like better, or to race off from one end of Australia to the other doing nothing but screwing around and crashing into things, but the game also could be said to lack much drive in pushing the player forward. You start the game as the greatest thing ever, and everyone says so.

And while Forza Horizon 3 provides you with tons to do, it lacks the structure necessary to help you get good at anything. Fresh to the Forza series, I felt like I was a terrible driver in Forza Horizon 3 for hours upon hours. Despite that, I wasn’t punished. If a challenge was hard, I could just move to something else. It never felt like I was gaining much in the way of skill.

Forza Horizon 3 is great for providing lots of low-pressure driving variety, but it’s not so great at fostering a sense of competition.

Still, Forza Horizon 3 gets the fun of driving, and everything from the DJs on the radio to the construction of the world is focused on the tone of having a really enjoyable time in a vehicle.

The Forza franchise was built from the start around the concept of enjoying cars without the hassle of actually owning them. Forza Horizon 3 nails that, creating an extremely strong open-world driving game that goes far out of its way to provide variety and volume.

Some players may want a more extreme, realistic take on racing, and so they might want to look elsewhere — but then again, Forza Horizon 3 offers so many ways to customize, and such a breadth of player-created content, that it’s likely you can tune the game to be whatever you want.

And if you don’t feel like tuning, well, that’s okay too. Just pick a direction. And drive!

Topics
Horizon: Call of the Mountain release date, trailers, gameplay, and more
The best Xbox One games to play right now
Fortnite’s Fracture event will end Chapter 3 much sooner than expected
The Witcher 3’s long-delayed current-gen update launches this December
How to interrogate enemies in Warzone 2.0
How to farm EXP fast in Pokémon Scarlet and Violet
Why I refuse to buy The Callisto Protocol on PC, even with an RTX 4090
How to evolve Primeape into Annihilape in Pokémon Scarlet and Violet
Where to find the Tactical Pistol in the Callisto Protocol
How to get a nuke in Warzone 2
‘Wordle’ today, December 3: Answer, hints, and help for word of the day (#532)
Call of Duty: Modern Warfare 2 contains the series’ most uncomfortable mission yet
Fortnite Chapter 3 Fracture Finale: when it starts and how to play