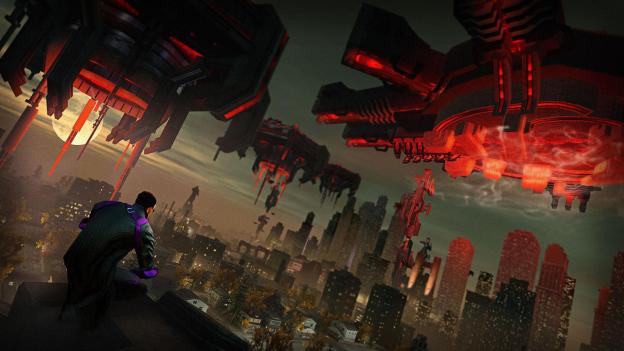 Deep Silver won the lottery when THQ fell apart. It scored big by acquiring the rights to Metro: Last Light for just over $5 million, and that was just the start. For a relative pittance, just a mere $22.3 million (according to reports), Deep Silver managed to swoop up Volition Studios, the Saints Row property, and the nearly complete Saints Row IV. It was an investment in the future, but it was also a near certain revenue stream. Saints Row: The Third shipped over 4 million copies worldwide. If the sequel comes even close to that, it will be a big win for Deep Silver, who has gone from mid-level player to one of the hottest publishers in the industry.

At E3 we had the chance to go hands on with Saints Row IV, and it’s obvious that the change in publisher hasn’t curtailed the outrageous nature of the series. The first few moments in the West Wing, aka the “Saints Wing,” prove that. The addition of the Presidential stripper polls and the cheerful and wanton destruction are enough to quickly confirm that.

Saints Row IV takes the insanity of the series and kicks it up a notch. Or a few notches. In another long running series, it might seem odd to suddenly introduce superhero gameplay, but then again, why not? The previous game wasn’t exactly grounded in reality, so going one step further isn’t an issue.

Hail to the Chief. After taking over as President of the United States, the leader of the Third Street Saints has been busy changing the country. In the demo we were shown at E3, the game began with the new President coming off an unpopular speech we didn’t see. His poor numbers roll off his back though, and a few more tough choices – including whether or not to cure cancer or to end world hunger – await. Then things get weird.

Under new management. The Zin Empire arrives, promising humanity’s elite a good life under their thumb. The rest of us, not so much. Not everyone takes kindly to the news, and the fight back begins. The Zin soon capture the Saints and put them in a VR world where they have super powers, for some unknown reason. The result is that the digital world of Steelport is your playground, and there are new ways to look at it.

The story is just as mad as you might think, and although it is out there, it is in keeping with the franchise.

You’ll believe a man can fly. The game plays much the same as before, but with an obvious and important addition: superpowers. While this in some ways fundamentally changes the game, it still feels like a Saints game. Where before you had insane weapons, now you have insane weapons and powers. You can also do power jumps and then glide, allowing you to almost fly. You have super speed and a handful of additional powers as well. In terms of gunplay, it is a third-person shooter, not much different from many others.

Open up. The demo offered us a look at a powered up character, roaming around the open world of Steelport. The added powers create a more vertical world than before, which opens up more collectible opportunities. Combat is always just a jump away, as Zin and human enemies attack constantly. Multiple missions, both single player and co-op, are littered throughout the map as well.

Boom. The powers give a lot of new options, but they blend with the wild weaponry. On display were: a freeze ability, a fire attack, a ground attack, and a telekinetic power. Of them all, the telekinesis is the stand out and creates the most interesting new potential, but they all have their uses. When you mix them all, you can do incredible things. You can freeze enemies, shatter them with fire, grab them, then shoot a black hole weapon and throw enemies in it. It is absolutely nuts, and that is just the way a Saints Row game should be.

Gen IV. The game is made for the current gen. It looked a bit at odds with some of the shinier games that debuted at E3 last week, but it looks good by current gen standards, especially when it comes to the scope. Some of the facial animations aren’t as strong as in other, comparable games, but the city of Steelport is detailed and imaginatively designed. There is a humor to the animation too that makes up for the rough edges.

Same great taste(lessness). If you had any concerns that the raunchiness and crude humor of the previous games was gone, rest easy. If anything, Saints Row IV pushes the envelope forward, and then tears it up. And then urinates on it just to hammer home the point. Dupstep firearms, weaponized sex toys, and strippers in the White House are all a common thing.

Deep Silver made a long term investment when it purchased the Saints Row property and Volition Studios. Saints Row IV will almost certainly turn into a money maker for the publisher, but there is no reason to think the property will stop at four games.