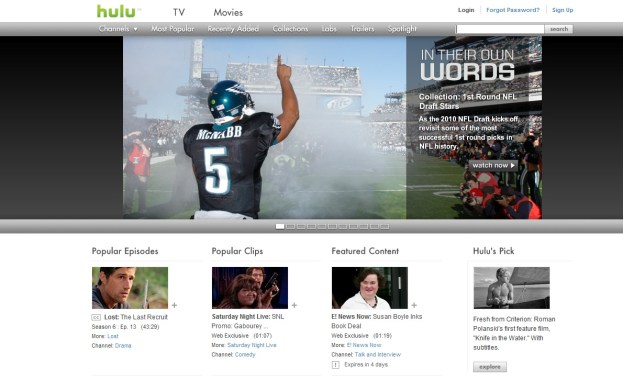 While the Nintendo Wii might not be leading in many sales categories, it does hold the distinction of being one of the most popular devices for streaming Netflix content. Now we’ll find out if the same can be said of Hulu Plus content, too.

In an announcement made today by Nintendo, the company revealed plans to bring subscription-based streaming service Hulu Plus to both the Wii and handheld Nintendo 3DS system by the end of the year.

The service will offer subscribers streaming access to a massive library of past and current television series.

While exact details of the deal are scarce at this point, the announcement does indicate that the service will cost the same on the Nintendo platforms as it does on Xbox 360 and PlayStation 3. Users will need to pay a monthly subscription fee of $7.99 for access to the Hulu Plus library.

“With Hulu Plus, Wii and Nintendo 3DS users will be able to instantly stream thousands of TV episodes – including the entire current season of popular shows like Modern Family, Glee, Dancing with the Stars, The Biggest Loser, House and Grey’s Anatomy – from premium content partners like ABC, Comedy Central, FOX, NBC, MTV and many more,” reports the company. “Hulu Plus also offers access to classic TV favorites like Lost, Battlestar Galactica, The Hills and hundreds of popular and award-winning movies.”