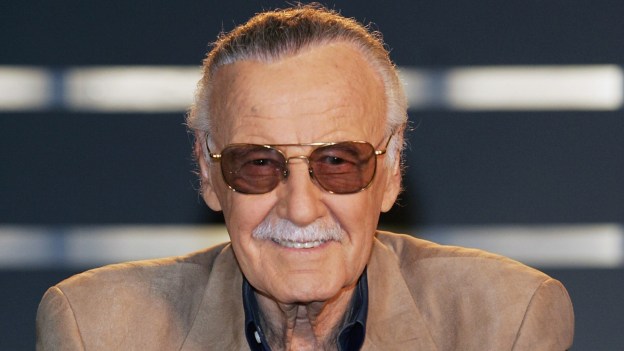 If you ask someone who’s never picked up a comic book in their life who Stan Lee is, the odds are pretty good they’ll know. Lee has become synonymous with comics. He’s the man behind some of the most successful comic book (and now movie and video game) franchises of all time, including Captain America (now playing in a theater near you in 3D), Thor (coming home September 27 on Blu-ray 3D) and The Amazing Spider-Man (rebooting next summer in theaters). Lee is making the rounds at Comic-Con 2011 in San Diego to discuss his newest projects and check out the latest video games, movies and comics. He talks about what he’s up to in this exclusive interview.

What role does Comic-Con play for someone interested in getting into the industry?

A very big role, because besides the movies, television, DVDs and video games, there are also great displays from the comic book publishers. And there are comic book editors, artists, and art directors there. There are many opportunities to show your art work or to discuss any story ideas you might have with editors. It isn’t easy because it’s crowded and you’ve got to sort of push your way through a line to get somebody, but if you’re persevering enough, there’s always the chance that you’ll find a receptive ear.

How has the comic book landscape evolved since you first started?

Oh, it was much different than it is now. You didn’t really have to be a good writer, you just had to be a writer and even the artwork was a little more primitive than it is today. There were incredibly talented artists and writers in the business, but the publishers weren’t that particular or that knowledgeable, nor did they have much respect for the readers. They felt that the readers would buy almost anything if it was brightly colored and there were enough fight scenes. So the biggest problem was to turn the books out on time and not be late for the printing date, and to make sure there were enough fights and exciting scenes in the story.

At Comic Con you’re introducing Blood Red Dragon. Can you talk a little bit about what it’s been like working on that project?

It’s been great. First of all I’m working with an old friend who is one of the most talented men in the business, Todd McFarland, so that makes it all worthwhile right there. You know he’s the creator of Spawn and so many other things. And then we’re working with Yoshiki of Japan X, who’s the idol of the Orient when it comes to being a rock star. I think he’s going to become just as big here, so we’re basing this entire comic book on him. We fictionalize it a little bit. He really isn’t a super human with super power, although he’s a very talented guy. But the book is a lot of fun. It’s a beautiful comic book and I think it’s going to help introduce him to the American public and it’s a very exciting project.

Video games are huge in Japan. Do you see this as being a potential future video game project?

Oh, there’s no doubt about it. Yeah.

Do you have a gadget or a piece of technology that you can’t live without?

Oh, absolutely. My computer. Well, I’m not really great at technology, per say, but I couldn’t exist without the computer because I do my communicating, I do my writing, I do my looking things up. I mean, the computer has become everything to people in today’s world and whether you’re on your computer or whether you’re getting that information from your iPhone or your iPad or whatever it is, it seems that things happen so fast. I wonder how just a few years ago we ever lived without being able to Google information or do all the things you can now do with a computer.

What are your thoughts about the role technology currently plays in the comic book space, and do you see there always being a space for the print versus the digital comics?

Oh, I think so. I think that the print is sort of where everything originates, and that’s where you get the really beautiful artwork and that’s where you get the original stories and then they take off from there. Now eventually, you’ll have the digital comics. You’ll see your comic book on the screen on your iPad or your iPhone or whatever, but somehow I think there will always be comic books. I just don’t think they’ll be the million sellers that we had in the ‘50s and ‘60s, but they’ll always be around because there’s something very comfortable about a little comic book that you can share with a friend or you can put it on a shelf and build a collection of them, and so forth.

Where do you find inspiration for your projects these days?

Well, I don’t know that inspiration is the right word. Whenever I need a new project I just go home and keep thinking until and idea comes to me. I’m not one of these guys who walks down the street and suddenly, “Wow, I just had an inspiration.” In fact, I’m never thinking of anything. I’m usually thinking of what will I have for dinner or what will I tell my partner Gil who isn’t around and I wonder where the hell he is and things like that. So inspiration isn’t the word. It’s just we need a new TV show. We need a new movie, and it ought to be about a science fiction, so I go home and I say, ‘Well, what science fiction movie hasn’t been created yet?’ And I’ll create that one. So it’s just a matter of hard work and thinking.

Do you have any new super heroes coming out?

Oh, yeah. We’re doing our first non-American superhero. We have a Chinese super hero and we also have an Indian super hero. We’re really covering the world.

When it comes to those markets, do you think of super heroes and their abilities differently than for like the US market?

Well, everything has to be done differently for every country or every part of the world, but the basics remain the same. You need a hero that people care about. You need a villain and it has to be a situation where it looks as if the hero is never going to be able to beat this guy or even survive, and yet you find a way for the hero to emerge triumphant and for the audience to walk out of the theater happy as hell.

What else are you working on?

We’re doing a live-action musical called Ying and Yang: The Battle of Tao. It’s a cross between a rock opera and a musical. It’s live action and it’s also almost a reality show because the audience is part of it. It’s never been done before. We’re gearing it more for the Asian marketplace and we’re in discussions with one of the major hotels over there.

We also have a number of new comic books that are being published. And we have a couple of pilots being written for TV series.