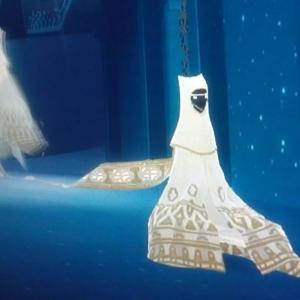 It was a happy day for me when Sony announced that it would soon be releasing the Journey Collector’s Edition for the PS3. Without question, for me my best gaming experience of the year so far has been Journey. Please notice that I chose my words very carefully. I am not claiming it is the best game of the year, or even my favorite. It very well might be both, but I am not prepared to make that claim quite yet.

But putting aside that split hair, I can comfortably claim that Journey is the best gaming experience I have had this year. It is an emotional game that even the most bitter film critics would be hard pressed to deny that it was anything but art (sorry Ebert, not ready to let that one go yet). It is an incredible experience that makes you think, feel, and imagine, and it comes highly recommended (check out our full review for more details.

In retrospect, Journey’s incredible debut shouldn’t be a surprise to anyone that has followed the history of thatgamecompany. Its two previous releases were both unique experiences that stood out. The first, flOw, was a good game that offered something original and immersive. The follow-up, Flower, was incredible, and Journey is better than them both. It has been a natural progression, and based on that, thatgamecompany’s next game should blow people’s freaking minds. No pressure though.

But despite the raves for all three games (and the beleaguered cries of pitiful game reviewers), the games are still somewhat unknown by the mainstream. These are games that all fans of gaming should play, and so a re-release to further expose them is a good thing, no matter what.

The first game, flOw, is relatively simple, but undeniably addictive game. You control a segmented creature that exists in an aquatic environment. You move through different planes to consume organisms and avoid hostile creatures. It is a straightforward concept, but in practice it is amazingly constructed and worth a look.

Flower is much more colorful and arguably more powerful game, but it also has a singular gameplay mechanic. You are a flower petal, floating through a deadened field, collecting the petals of other flowers to take them to certain locations in order to revitalize an area. The description doesn’t do it justice; the game is beautiful. The gameplay mechanics are tight, responsive, and can make even the clumsiest person feel graceful.

And then there is Journey, which has been discussed at length. Basically, it is the bee’s knees. Some have said that it has changed their lives, and while that is certainly hyperbole, it can change the way you look at some games.

The Journey Collector’s Edition contains all three games, along with three other titles that were each created by thatgamecompany in 24 hours at an event called Game Jam. All three are worth playing if you are a fan of the developer. There are several clever ideas at work that are worth seeing, and they will give you an even greater respect for thatgamecompany, but they aren’t much more than a quick distraction.

The real meat of the extra content comes with the three primary games, and includes commentary, soundtracks, concept art, and more. The commentary clips offer a fascinating glimpse at the inner workings of both thatgamecompany specifically, and game development in general. Fans of the industry and those hoping to break into it one day should consider this homework. But there is a catch.

The additional content is something fans of the games will eat up. Having the soundtrack at your disposal is notable, and hearing about the design process is every bit as compelling as listening to film commentaries on DVD/blu-rays. If that isn’t something that appeals to you then these features may not mean much to you, but to fans of the games and the concept they are well done. The problem is, if you are already a fan and have already played/purchased the games, there is not enough to come close to justifying re-purchasing the same game.

With the exception of the three playable mini-games that are interesting but not really a selling point, there is no additional playable content, and there is no improvement on the content. Usually on re-releases like this, there is an upgrade in the graphics, but these games were already optimized for the PS3 so there is no need to try to improve them. So if you are the audience that this game will appeal to most, those that are already fans, you won’t really gain much by purchasing this Edition. There are also several avatars and a month of PlayStation Plus to sweeten the deal, but if you already own the games you would be paying $30 for a few commentaries and a handful of novelties.

That said, if you haven’t played the games, or if you have only played one of the three main titles, this is a must own for anyone that truly considers themselves a gamer. It is a landmark collection that not only justifies the burgeoning digital download market, but also offers three games that are as much art as entertainment. It really just comes down to a question of whether or not you have already purchased one or more of these games already. If not, then buying three of the most incredible digitally distributed games ever made for $29 is a steal.

Updated to correct a typo.