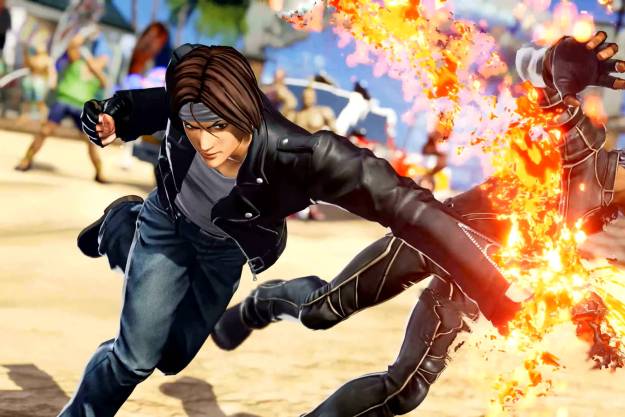 “The King of Fighters XV features excellent core combat that serious fighting game fans will enjoy, though its single-player offerings leave a bit to be desired.”

When SNK announced the grand return of its flagship fighting game series, The King of Fighters, I was skeptical. With current fighting game development trends seeing many classic franchises watered down, could there really be another great KOF entry left in the series?

After finally getting to try The King of Fighters XV, I quickly found out the answer is “yes.” The King of Fighters XV is a game that looks to the past for the best inspiration possible, remembers its core, and doesn’t let go of the classic team-based gameplay philosophy that defines the series. It accomplishes that perfectly without dumbing itself down in the slightest, remaining beginner-friendly and looking great with its new polished graphics.

Return of the king

The King of Fighters XV is a traditional 2D fighting game that truly feels like it’s returning to form and broadening its horizons in a world where its peers have devolved in hopes of bringing in new players. This new entry in the KOF series takes that flawed philosophy and throws it to the side, challenging new and old players alike to come and master all of its mechanics.

Like previous entries, this is a team-based 3v3 fighting game (though it features a 1v1 mode as well) and it separates itself from the competition with a unique system. Your three characters have different life bars, but all share a super meter. When one is knocked out, the next takes over and is granted an extra bar, which can go up to five stocks. Upon beating an opposing character, your current character’s life bar will refill a small amount. This system — along with the classic KOF movement options like runs, short hops, and hyper hops — are all intact for this installment.

Despite sticking to its guns, KOF XV feels like a breath of fresh air. It doesn’t water anything down to open doors to players that won’t know the difference between every specific mechanic. This makes it a very welcome title to longtime lovers of the series and newcomers alike, and it’s something fighting game players have been begging developers to realize for years now.

Of course, that’s not to say this old dog doesn’t have any new tricks. KOF XV’s combat feels better than ever. Upon starting the game, I went to my favorite character from the series, Shermie, and immediately felt at home. Everything I learned with her in past games still applied, down to the combos and knockdown options. But then came the new tweaks, which made playing even the oldest characters feel even more fun.

Despite sticking to its guns, KOF XV feels like a breath of fresh air.

Mainstay mechanics such as MAX Mode (which allows EX specials to be performed freely) have been further expanded with two different variations. Raw MAX mode increases the damage and guard bar damage done by activated characters and Quick MAX can be canceled into it from a connecting normal attack, making for a good combo tool despite its shorter duration.

Along with those mechanics come classics like rolls, short hops, hyper hops, and guard cancels. The newcomer, Shatter Strike, is a big game-changer. For one super meter, players can use an armored blowback attack that crumples grounded opponents and wall bounces aerial ones, making it a great guard cancel and combo tool.

What you may notice from that mechanical breakdown is that a lot of these mechanics have multiple applications. There are tons of unique approaches players can take and they’ll all be necessary if they want to really master the game. Want to go for max damage combo using all your resources? Well, you can do a MAX Mode combo that is longer and builds more meter, or you can keep it simple and cancel a super from a special into a Climax super cancel that does more damage but leaves your meter empty. Players also have a good variety of defensive options on top of reversals to keep opponents on their toes, even when they’re on the offensive.

The king of netplay

The new renaissance of fighting games that we’re in has basically made it mandatory for any new fighting game to come equipped with rollback netcode, which is the best possible online networking option for the genre. KOF XV hasn’t strayed away from this new necessity and wears it amazingly well.

I had expectations and they were met. After jumping online and playing a few matches, I couldn’t believe how smooth the experience was —  it was as if I was playing offline. If Guilty Gear Strive set a new bar for online play, then King of Fighters XV meets and possibly rises above it. (Of course, that doesn’t mean you should be without a wired connection altogether if you’re a pro venturing online

While my experience with the actual fights in The King of Fighters XV has been amazing, I can’t say the same for the entire package. The game is severely lacking in single-player content, which doesn’t give much to the crowd that isn’t in it to go online and challenge the world.

KOF XV comes stocked with a standard arcade mode (called Story Mode), a bare-bones tutorial that commits the sin of only teaching basic attacks, a standard mission mode, training, and various online and offline versus modes. While this is the standard for fighting games, it really shouldn’t be what we’re stuck with.

Where’s survival mode, an expansive tutorial like that of Guilty Gear Xrd or Skullgirls, or even Street Fighter Alpha 3’s World Tour mode? Yes, the core fighting game experience is facing another player, but as the world evolves, so should these titles in every area. Even the training mode isn’t really up to par, lacking real frame data beyond letting you know if you’re plus or minus, hit/hurtbox viewing, and other advanced options.

If my reaction to exploring the main menu is, “OK, where’s the rest of it?” then something is seriously wrong.

The King of Fighters XV is a game deserving of its title. It feels like the perfect evolution in a long-running fighting game franchise and isn’t afraid of being what its main fans want it to be. Mechanics aren’t watered down and it doesn’t backtrack on what makes the series so great. That makes for a perfect entry for all types of players. However, there is a severe lack of content, a curse that’s been plaguing fighting games for a very long time that sadly makes an appearance here. Thankfully, strong online play makes it a great fighter game for the hardcore players who simply wants to hone their skills and challenge the next player, which pushes KO FXV into the ranks of the best modern fighters around.

Like any fighter, it’ll last as long as it holds your attention, so mileage may vary. For the single-player crowd, there’s not much to do. If you’re a fighting game lover, on the other hand, then you’re probably going to get a lot of playing time out of this one, especially with its great netcode.

There are tons of alternatives, new and old, thanks to programs like Fightcade giving older fighting games modern netplay. However, if you’re looking for something with that new car smell, there’s always Guilty Gear Strive, though it has some different combat philosophies.

Yes. If you’re looking for a traditional 2D team fighting game with a new/classic feel, then King of Fighters XV is definitely for you. Solo players might want to look elsewhere, though.