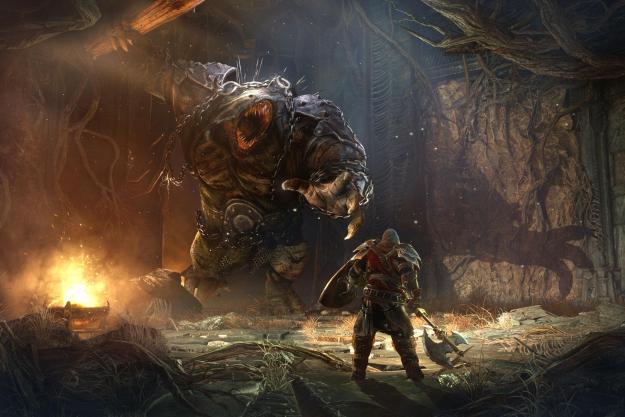 “Lords of the Fallen plays fast and loose with the established ideas of better games, but the results don't suck.”

Lords of the Fallen walks a fine line between imitation and interpretation. It has plenty of attributes all its own, and no shortage of personality, but at a primal level it’s a flagrant clone of Dark Souls and its ilk. This is what you’d get if an aspiring painter on a week-long bender did a self portrait in the style of the Mona Lisa. Is it a masterpiece? Hell no. But can we study it, enjoy its merits and learn something new from it? That depends on the viewer.

Lords of the Fallen walks a fine line between imitation and interpretation.

Lords is a dark fantasy hack-‘n’-slash RPG with influences ranging from Darksiders to The Witcher, in addition to the obvious one. Much like those games, it follows a named and non-silent protagonist, which alone sets it apart from many others in the genre. This man, Harkyn – no option for a female hero, unfortunately – is by no means a boring character, and he actually embodies many of Lords of the Fallen‘s best and worst qualities.

He’s bold and enigmatic, with a clearly troubled past that’s never fully revealed. He doesn’t speak often, and when he does it’s usually just to move the story along. Harkyn is a powerful mage and warrior, but he’s also sloppy. And most importantly, he doesn’t give a damn what the people around him want, whether they’re asking him favors or barking orders. He’s going to make up his own mind in the end, and it might just be worth it – even if that means betraying someone’s trust.

Look at the game’s combat. That more than anything else is ripped wholesale from the Souls series – light and heavy attacks, raising your shield and parrying are all mapped to the triggers and shoulder buttons, while the face buttons dodge, run, change your stance, and use consumable items. It feels instantly familiar – more than that, it’s so very identical – to anyone who’s enjoyed From Software’s Souls series.

But like Harkyn when he decides to cave to his own whims, Lords of the Fallen has its own wrinkles and differences that set it apart from contemporaries. For example, a gauntlet that can be equipped at the tap of a button fires magical blasts and bombs with hugely varying effects that can be manipulated via a simple but rewarding system of equippable runes. These can be applied to weapons and armor as well, adding effects ranging from more damage to health-sapping attacks, or simply greater poise so you’re not staggered so easily by enemies’ attacks.

More generally, combat in Lords of the Fallen is sloppier and looser with the rhythms of its mechanics. If Dark Souls‘ encounters are a delicate ballet or a fencing match between champions, Lords‘ are a drunken fistfight outside a bar at 1am. Rather than dodging or using your shield, with the right equipment and spells you’ll simply rain blows on your opponents like you have nothing to lose. And surprisingly, this often works.

Part of this may stem back to the same reason no other developer has tried to capture the magic of the Souls games: because these types of systems are really hard to get right. Developers Deck13 and CI Games made it easier on themselves in part by leaving out multiplayer; Lords of the Fallen is a purely solo experience, which perhaps freed them from the type of fine-tuning that may have otherwise been necessary. That also lets you pause whenever you want, which is only a luxury if you’re used to the Souls series.

In any case, it’s not a bad thing. In fact, after hundreds of hours of those games it feels freeing to just wail on some monsters, secure in the knowledge that you’ve pumped so much experience into your endurance that they won’t be able to make a dent. Lords is still very difficult, particularly early on when your equipment sucks, but overall you can cruise control it a little more than you might expect coming off the other series.

There’s little worry that Lords of the Fallen will ever overtake Dark Souls as anyone’s fantasy action RPG of choice.

The experience system too is an example of something that Lords twists into new shapes, despite its resemblance to what the Souls games do. Die and your shade is left behind, with all the experience you were carrying on you, at the point where you died. You have to trek back there – no matter how far it is from your last checkpoint – to get everything back. But the longer you take, the less of your experience will be left when you arrive. Twist!

You can periodically turn these points in to level up and avoid losing them, but doing so resets a multiplier that can double the experience you gain from defeating enemies. It’s a very smart system that rewards you directly for putting your progression at risk.

Unfortunately Lords often feels technically sloppy as well, with many common glitches plaguing a 20 to 30 hour play through, plus a frame rate that ranges from mediocre to abysmal. It may crash your system, losing some of your progress along the way – the game’s save system isn’t nearly as smart as Dark Souls‘ – or you may simply be unable to use a checkpoint or damage an enemy who’s raining blows on you, like a dream in which your arms turn to jelly. Either way the result is the same, and it’s not good.

The game’s world is comprised of three main areas: a sprawling citadel and fortress, an extensive network of catacombs and dungeons, and a demon realm reached through a portal. There are no fast travel options, but the environment is honeycombed with shortcuts that take you back to previous areas. You’ll open a door in the final levels and feel a shock at the fact that you’re back in the game’s very first area.

There are countless secrets to discover, and most of them are only ever vaguely hinted at within the game itself, if that. It rewards replaying and collaborative sleuthing with an online community, and there are tons of cool stylistic choices – how time slows for the space between breaths just as you land a killing blow, or the way treasure chests budge a grudging inch when Harkyn slams their lids open with a heavy-booted foot.

Lords manages to set itself apart best in its narrative and aesthetic elements, for better and for worse. Here’s where the Darksiders influence rears its steel-tipped head: the characters are stocky and cartoon-like, the conversation trees are simple, and everything is covered in demon horns or spikes.

Choices are few and far between in Lords, and those that exist usually result in either a shallow change – this guy dies and this guy lives, or vice versa – or one that’s either objectively good or bad, which isn’t any better. There are three character classes and three magic types to choose from, but they all play similarly, and there are no bows, or spears, and many of the spells are only slight variations on one another.

It’s like this: there’s only one type of armor in Lords of the Fallen, and it’s the badass kind. If you want to put on butterfly wings or a mage’s robe, go play a different game. Some weapons are so comically large that they literally take four seconds – four seconds – to swing. When it gets to that point Lords seems almost like a parody of itself, but it remains ever serious, sometimes to its detriment – especially as the story begins to make less and less sense.

Contrary to the Dark Souls school of thought, obfuscation of narrative elements does not automatically equal depth. There needs to be something more under the surface for that, and too often when Lords‘ facade cracks it simply reveals more gibberish and predictable plot twists underneath.

Lords of the Fallen is an interesting lens through which you can examine the whole gaming industry, particularly the dynamic between mobile and traditional games. The clever and likable Threes was ripped off wholesale within weeks as 2048, and that copycat proved somehow more popular than the original. Yet there’s little worry that Lords of the Fallen will ever overtake Dark Souls as anyone’s nail-bitingly hard dark fantasy action RPG of choice.

This type of experience is just too difficult to replicate. Lords of the Fallen is a very good game, but its struggle to escape the shadow of the better games that preceded it colors every minute of the experience. At least Bandai Namco timed it well; if you’re hurting for more of this type of pain while you wait for Bloodborne to drop, you won’t do much better than Lords of the Fallen.

This game was reviewed on Xbox One using a download code provided by the publisher.