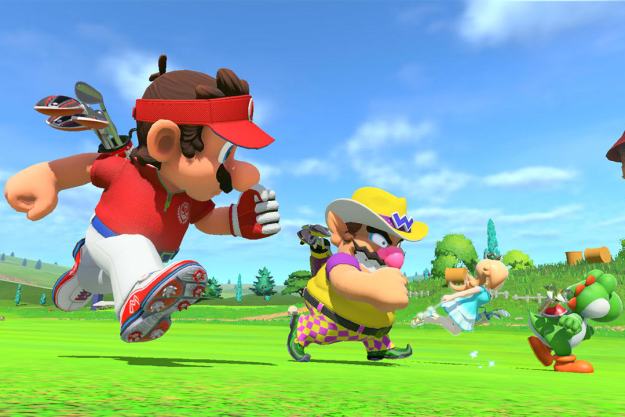 “Mario Golf: Super Rush features elegant golf systems, but is devoid of content that makes good use of it.”

Mario Golf: Super Rush is a case of the master becoming the student. When the original Mario Golf launched in 1999, there wasn’t a lot of competition in the golf simulator market. It’s a much more crowded field nowadays thanks to a recent wave of standout indie golf games. With Super Rush, Nintendo seems to be taking notes from the very titles it inspired.

That’s not to say it doesn’t flex its skills. Like other installments in the sports series, the new Nintendo Switch game offers fine-tuned golf gameplay that constantly reminds players why Mario became the king of the fairway in the first place. It’s just that much of what it brings to the table has been done better in recent years by “rookies” with a firmer handle on how to string together a full game.

Mario Golf: Super Rush sports the best core golf mechanics the series has to offer. Unfortunately, the experience is let down by a puzzlingly sparse package that doesn’t offer enough good reasons to tee off.

While there’s a lot to critique when it comes to the overall package, the act of playing a round of 18 holes in Mario Golf: Super Rush is an absolute pleasure. For decades, developer Camelot has fine-tuned its golf mechanics, constantly improving a wheel that doesn’t need reinvention. Super Rush is a culmination of over two decades of work, offering elegant golf systems that anchor the experience.

On a basic level, it might not seem much different than any other golf game. There’s a meter on the right side of the screen that determines how much power goes into a shot. Press a button to initiate a shot, press again to set how far the ball will travel, and watch a golf ball sail off with a satisfying thwack.

What’s so appealing about Super Rush, however, is that it makes players think much more about the shape of their shot. In many golf games, it’s easy to simply hit the ball as hard as possible every time and ignore all nuances. That’s not the case here. It does an excellent job at visually communicating all the little things that affect a shot’s trajectory. When driving off a hill, the shot gauge will curve, showing exactly how it’ll veer off course. There’s also a red “risk zone” that appears at the top of the gauge, which signals that hitting at full power may trade off some control. Little cues like that make every shot into a more active experience that involves calculating risks and mitigating variables.

On top of that, it makes some of golf’s more complex systems easy to understand and execute. Adding topspin or backspin is a matter of tapping the right button when setting the shot gauge, while spin is easily applied by pushing the joystick as the gauge builds up. It’s all so intuitive, inviting players to actually use every system rather than writing them off as expert techniques.

Super Rush is a culmination of over two decades of work, offering elegant golf systems that anchor the experience.

It’s worth noting that this is the first Mario Golf game to ever feature motion controls, as the series missed the Wiimote era entirely. While high-level players will likely stick to button controls, it’s a fun and functional option for those who want to get physical. What’s more, motion controls work in just about every mode, which is a big step up from Mario Tennis Aces’ underutilized motion.

This is simply the best the sport has ever felt in a Mario Golf game, and perhaps in general. As someone who has played tons of golf games over the years, this is one of the first times I really felt like I was using every tool in the bag.

The question is: What can you actually do with that tight system? That’s where Super Rush takes a disappointing turn. There’s a bizarre lack of content in the game. It includes a normal golf mode that allows players to free play any of its six courses and a somewhat laughable “challenge” tab on the main menu, which only includes a score attack and time attack option.

The bulk of the content lies in the game’s adventure mode, which brings back the series’ RPG story roots. Players create a Mii character and follow them through a half-baked story filled with different golf challenges. Players will compete in different match types, improve their stats by leveling up, and buy a small handful of gear along the way.

When it ended, I backed out to the main menu and stared at the screen unclear on what I was supposed to do next.

The entire experience feels more like a tutorial for the game’s multiplayer modes than anything. It walks players through the fundamentals of new ideas, like a stamina meter that comes into play in game modes where players actually run on the fairway between shots. Because of that, it never really meditates on anything for too long or asks players to build their skills. Every challenge feels like a basic introduction that’s gone as soon as it begins. As soon as the campaign waits until its final stretch to introduce wackier ideas, like boss fights where players have to perfectly time shots to shoot elemental blasts back at giant creatures, the adventure ends.

I finished adventure mode in six hours, buying every single piece of gear and unlocking all six courses along the way. When it ended, I backed out to the main menu and stared at the screen unclear about what I was supposed to do next. It felt like I had reached a content dead end where all that was left to do was try to improve my score on the same handful of courses. Each character has two sets of unlockable clubs acquired by earning enough “points,” but that’s the extent of the post-adventure hook.

It’s genuinely bizarre when comparing it to previous Mario Golf games. I spent over 30 hours in the Nintendo 3DS title Mario Golf: World Tour completing challenges, unlocking characters, and collecting every piece of gear that I could outfit my characters with. Super Rush just isn’t a game for solo players who want to flex their skills, making it an expensive alternative to great (and cheaper) Switch contemporaries like Golf Story.

Golf with your friends

The lack of single-player content may signal that Nintendo sees this as more of a multiplayer party game than anything. It’s an understandable mindset because that’s where the game shines. Playing a round of golf with friends is a relaxing multiplayer experience that’s perfectly built for light-hearted trash talking. Super Rush may also be the most stable online Nintendo experience I’ve ever had too, which makes it even more appealing than trying to play something like Super Smash Bros. Ultimate with friends.

All three game types have unique strengths, but they’re ultimately let down by the same content problem that plagues single-player.

The standard golf mode is the star of the show here thanks to little quality of life improvements that make games move quicker. An “all at once” option, for example, lets all players tee off independently, so no one has to wait around while a perfectionist friend finishes their shot.

For those who find regular golf too dry, Super Rush offers some clever modes that feel built for parties. Speed Golf has players literally racing around the fairway to be the first player to complete a hole. Characters can dash into one another between shots or launch special shots that can mess with their opponents. Luigi’s special, for example, can summon a big patch of ice on the ground that turns putting into a slippery affair. It’s a chaotic mode that adds lots of laughs to a traditionally straight-laced game.

Battle Golf is a slight variation on that idea, but it takes place in a small circular arena that has nine holes. The first player to claim three holes wins, which results in some genuinely tense fights when there’s only a flag or two left.

All three game types have unique strengths, but they’re ultimately let down by the same content problem that plagues single-player. There are only two arenas available in Battle Golf, one of which is simply a slight variation of the other. With only six main courses, standard and Speed matches start to wear thin after a session or two.

Nintendo confirmed that Super Rush will get free DLC, so perhaps we should expect the slow, steady rollout of a live service game here. More courses and characters are coming, so there will be more reasons to play eventually. Give me any excuse to return to the fairway and I’ll block off an evening to play a new 18 holes with my friends — the golfing feels that good. Until then, Mario Golf: Super Rush has about as much depth as a par two course.

On paper, Mario Golf: Super Rush should be a hole-in-one. The core golf experience has never been better and multiplayer modes like Speed Golf offer a clever twist on the formula for casual players. There’s just not much to do outside of its short, disappointing adventure mode. Free DLC should help pad it out in the long run, but an overall lack of content leaves the package in the semi-rough for now.

Golf Story provides a much better version of Super Rush’s adventure mode and Apple Arcade’s Clap Hanz Golf is a great option for those who want a simple golf experience.

Adventure mode is over in six hours. After that, it’s just a matter of how much you can milk out of its six courses and multiplayer.

No. At least not at the moment. It may be worth the purchase after it gets some free DLC courses, but the lack of actual game modes makes it hard to justify the full price until then.

Topics
Every video game delay that has happened in 2023 so far
The best PSVR games for 2023
The Elder Scrolls Online’s 2023 updates bring players back to Morrowind
The best Fire Emblem games, ranked from best to worst
How to link your Fire Emblem Engage and Fire Emblem Heroes account
Xbox and Bethesda’s Developer_Direct: how to watch and what to expect
Goldeneye 007 comes to Game Pass and Nintendo Switch later this week
The best iPhone games in 2023: 31 games you need to play right now
I can’t believe I’m recommending Forspoken on PS5 over PC
Redfall’s May 2 release date revealed during Developer_Direct
Xbox just surprise announced and released a stylish new Game Pass title
How to cheat in Words With Friends
Shoulders of Giants brings mascot-era nostalgia to the roguelite genre