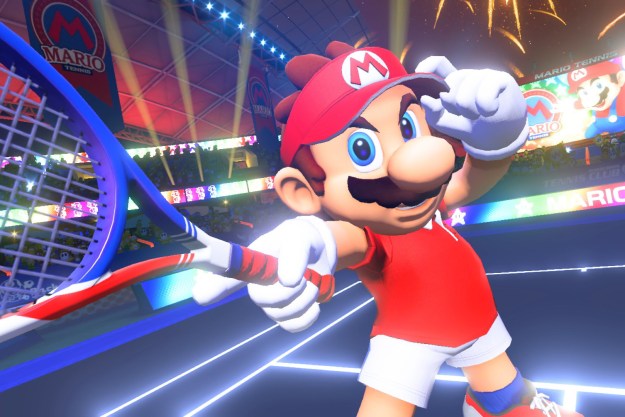 Never has a game console been more suited to tennis than the Nintendo Switch. Its portability makes it a great option for getting in a match or two on the go, and its motion control features allow even the least experienced players to get in on the action. Mario Tennis Aces, a game that manages to pack complex strategies and abilities behind its adorable mustached façade, is perfect for the console. That depth doesn’t extend to the variety of content in Mario Tennis Aces, however, as you can easily see all the game has to offer in a weekend.

Mario Tennis Aces automatically launches into Adventure Mode, the story-heavy campaign that serves as an introduction to the game’s many shots, mechanics, and strategies. While Mario, Peach, Toad, and the rest of the Mushroom Kingdom’s heroes have been working on their serves and volleys, the dastardly Wario and Waluigi have managed to acquire a cursed tennis racket capable of giving its user unthinkable power.

Worse, the racket is prone to mind-controlling its users. Both Wario and Waluigi – along with the captured Luigi – are brought under its spell. Only with the five Power Stones scattered throughout the Kingdom of Bask can Mario defeat his nemeses and rescue his less-talented brother. Of course, he’ll have to defeat a number of bizarre tennis challenges along the way.

Unlike the role-playing story modes in older Mario Tennis titles, the Adventure Mode in Mario Tennis Aces doesn’t offer much player choice. You’re shuttled from one challenge to the next, and except for a few optional challenge stages, the path is completely linear. That isn’t a bad thing if you’re accustomed to the storytelling style of recent Mario platformers, but it does limit variety. There’s no surprises here.

Adventure Mode is a blast to play, and the writing is consistently funny.

What Adventure Mode does do is provide you with a solid tutorial for the moment-to-moment tennis action you’ll see in all other modes. Beginning with simple, quick matches against lowly opponents, Mario eventually faces off against bosses that make use of special abilities like teleporting mirrors or cannon blasts.

These may seem like silly gimmicks to change up the basic tennis formula, but as you learn to deflect super-powered shots and place your own shots in the corners of the court, you’ll be gearing up to face off against live players without even realizing it. You’ll discover how to make use of the trick lob and drop shots, when to fire off a high-speed “zone shot” or “star shot,” and when to lay it all on the line with a devastating “special shot.”

Despite a few moments of frustration with later challenges and bosses, Adventure Mode is a blast to play, and the writing is consistently funny. A few baddies get some jabs in at Mario’s mustache, though he remains unfazed in his traditional heroic manner, and underappreciated cast members are given time in the spotlight. Petey Piranha deserves to be a star.

Unfortunately, Adventure Mode isn’t something you’ll keep coming back to for several sittings. It can be completed in just a few hours, and it’s clearly intended to be an introductory mode rather than the main attraction. That honor goes to multiplayer, which sees Mario Tennis Aces at its most thrilling.

You can compete with up to three other players locally, and face off online against players who’ve mastered every shot and tactic you have, and oftentimes have figured out maneuvers you didn’t even know were possible. From curving serves out of your reach to launching lightning-fast spikes, your opponents will keep you on your toes, and Nintendo’s matching system does a good job of pairing you against similarly skilled players. We encountered a few connection issues during our time with the online tournament mode, but changing a few Wi-Fi settings on our end seemed to fix the problem, and games stopped dropping like they did in the pre-release online beta.

With 16 characters to choose from right now, and three more coming over the next few months, you have plenty of options and play-styles at your disposal. “Tricky” characters like Boo and Rosalina can make jittery players crazy with their hard-to-reach slices, while the “defensive” Waluigi can return shots from nearly anywhere on the court. Discovering your favorite style by trying out all of them is part of the fun, and we saw players succeed with nearly everyone on the roster, including jack-of-all-trades characters like Mario and Daisy.

Mario Tennis Aces delivers a solid game of tennis underneath its playful experience. From placing your shots to returning difficult serves, you feel like you’re in complete control of your racket and the ball, and you can even learn to block the most powerful special shots after a little practice. Managing to place a drop shot in the perfect spot feels incredible, as does punishing another player for prematurely moving to one corner of the court before you slap a slice right behind their back. In the “simple” game type, you can experience a match with nearly all special and magic abilities removed. It’s a nice diversion, and forces players to locate their shots more carefully, but you’ll want to go back to the wackier standard option before too long.

From placing your shots to returning difficult serves, you feel like you’re in complete control.

For those who might not be comfortable with traditional controls – or those who simply loved the tennis mode in Wii Sports – Mario Tennis Aces offers the motion-controlled “Swing Mode.” With a single Joy-Con controller you can play tennis much like you would in real-life, swinging the racket to the left and right to send shots flying back to your opponent. Swing at the wrong time and you risk hitting a shot out of bounds, but mastering the mode is far easier than anything else in Mario Tennis Aces. Movement is handled automatically, though you can use the analog stick if you prefer, and it’s a worthwhile choice if you’re having a party and want to get everyone involved.

What’s included in Mario Tennis Aces makes the game a great choice for Mario and tennis fans alike, and we can see dedicated players competing in high-level player over the next few months, but we wish there was more meat. Unless you plan on becoming really good at online player, or constantly have visitors at your home, you’ll be limited to only a few modes, none of which are likely to keep you entertained for more than an hour or so at a time. For a commute, or something to play before work or bed, it does the job — but don’t expect it to keep your attention throughout the summer.

No. Tennis games aren’t common on any console, and Mario Tennis Aces is the best tennis game you’ll find on Switch.

Adventure Mode will last about three hours. Other modes can last for much longer, but only if you’re interested in improving your skills through competitive online play.

Yes. Despite the lack of length, Mario Tennis Aces delivers a fun, difficult, flashy take on virtual tennis, and its competitive mode can lead to nail-biting moments.