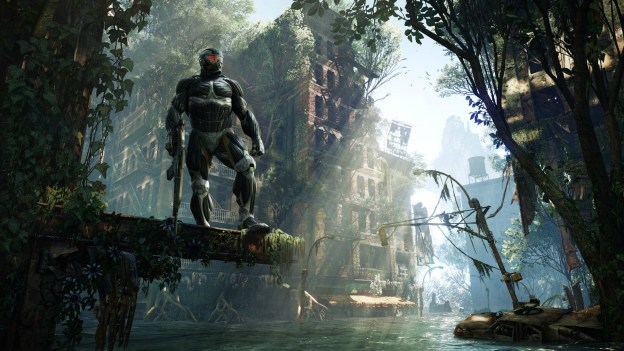 The competitive multiplayer modes in Crysis 3 are standard-fare team-based action in some ways, though the presence of the game’s Nanosuit adds some unusual wrinkles. The basics are familiar enough. You go and fight on one of a handful of sizable battlefields, you earn XP for kills and assists, and you unlock new gear and abilities as you level up. You’ve been here before. The trick is getting the hang of the Nanosuit abilities, both how you can leverage them for success and how you can guard against them.

Read on to give yourself a bit of an edge in Crysis 3 multiplayer. It’s always going to be a game of skill and reflexes in the end, but every bit of extra intel that you have and your enemy doesn’t is going to help.

You’re equipped with a Nanosuit in most of the Crysis 3 multiplayer modes, which means you’ve got the same set of superhuman abilities filling out your tactical options on the ground as you do in campaign. If you’ve played the campaign then you already know what to expect and how everything works. Stealth mode is very useful in multiplayer, especially after you’ve unlocked a silencer for your firearm of choice. Even better is the Predator Bow, since you can fire away with that while remaining cloaked. Your energy will drain quicker, but it gives the bow the extra edge that it needs.

It’s tough to spot stealth-engaged foes. You can see a slight, opposing team-colored outline if you look carefully (think: the movie Predator), but it’s often difficult to pick it out in the heat of battle until that opponent is right next to you and punching your head off. Fortunately, cloaked foes still cast a shadow. Keep an eye on the ground. If the light is moving unnaturally, you’re probably looking at a cloaked baddie.

Armor mode is essential in Crysis 3 multiplayer since you’re going to be shot at a lot. It’s not all-powerful protection, but it can offer those few extra moments that you need to get to cover. When you’re first starting out, consider Auto Armor as an essential Module to equip. Modules are essentially the Crysis 3 multiplayer take on perks; in the case of Auto Armor, your suit will automatically activate armor mode once you start taking fire. You might replace it later on as you get to be more comfortable with the flow of the game, but it’s a lifesaver in the early going.

Unlike Crysis 2, Modules aren’t bound into separate categories. You can equip any combination in your three slots, and the more you use them, the more they improve. Auto Armor doesn’t have any upgrades, but in all other cases you’ll see Modules improve over time as you score kills. Take Phantom, for instance. The base level skill offers a faster transition in/out of stealth mode. Score 200 kills with Phantom equipped and you’ll ratchet up to Tier 2, which makes the cloak transition a noiseless one. Tier 3 comes at 500 kills, reducing the length of time stealth is shut down after you fire a shot while cloaked.

Your best bet is to stick with a small handful of Modules and work on those. Kill counts in Crysis 3 don’t tend to be huge for most players; this is a much more tactical game than something like Call of Duty is. So just focus your efforts on ranking up a select few Modules at a time.

Your Nanosuit is important, but you’re not going to be very effective in a given match if you aren’t packing some kind of heat. Weapons unlock sequentially based on your level; the game helpfully informs you in the customization menu which levels are required for which weapons. Each weapon also levels up individually, based on the number of kills scored overall with that weapon. Ranking up weapons is key to unlocking attachments and alternate ammo types. As with the Modules, it’s best to stick to a small handful of favored weapons and focus on improving those.

Keep an eye out as you run around the maps, as there are also heavier human and Ceph weapons scattered about. These don’t ever unlock for use in standard loadouts, but they offer more stopping power than anything you can equip. There are visual cues beyond just the weapon itself; you’ll usually find it near the husk of a downed Ceph. Note as well that you can also rip the gun off of any turret emplacement and carry it around. It slows up your movement speed, but you get a big boost to your stopping power in return.

Plotting A Plan Of Attack

While each multiplayer mode in Crysis 3 presents a different set of challenges that you’ll need to adjust to, there are a few general strategies that are more of the across-the-board variety. First off, these maps aren’t just large, they’re also extremely vertical. Don’t forget to take advantage of your Nanosuit’s capabilities in this regard. You can jump extremely high, and you can pull yourself up onto ledges that your jump wouldn’t otherwise connect with. This is especially helpful in a mode like Hunter, in which the Nanosuit-wearers really need to exploit their edge over the C.E.L.L. forces.

Also be sure to watch the skies. An AI-controlled gunship circles several maps in Crysis 3 on repeat. There are no rules here; if you can hop into the belly of the gunship, you can take advantage of its left- and right-facing turrets. A team with good communication that establishes air superiority quickly is a tough one to bring down. Learn the gunship patrol routes and hop into one when you can. Note as well that the jump-friendly locations tend to be popular camp spots for all players; approach cautiously, and always watch for potential ambushes by cloaked enemies.

Crysis 3 discourages camping by having downed players drop collectible dog tags when you score a kill. No one else can collect dog tags that belong to you, but you have to actually walk to the site of your kill and collect it. Each dog tag counts as one kill toward a killstreak reward. Rewards unlock at 3, 5, 7, and 10 kills in a single spawn, and you access them from your D-pad.

Keep an eye out as well for Pingers. Unlike the gunship, which flies around on its own, these Ceph walkers can be piloted directly by players. You’ve got a machine gun, a grenade launcher, and a shockwave attack when you’re seated in one of these puppies. It can be devastating in the right hands, so act quickly to bring enemy-controlled Pingers down as quickly as you can.

Newcomers to Crysis 3 multiplayer should spend at least a few hours getting accustomed to the flow of the game and the role of the Nanosuit competitive match-ups. Your best bet in this regard is to stick with Team Deathmatch, which offers a “New Recruits” lobby for anyone under level 10. The idea is to group all relatively multiplayer newcomers into one place so that you have fewer pros to contend with. This feature isn’t advertised; simply select Team Deathmatch and you’ll be presented with the option.