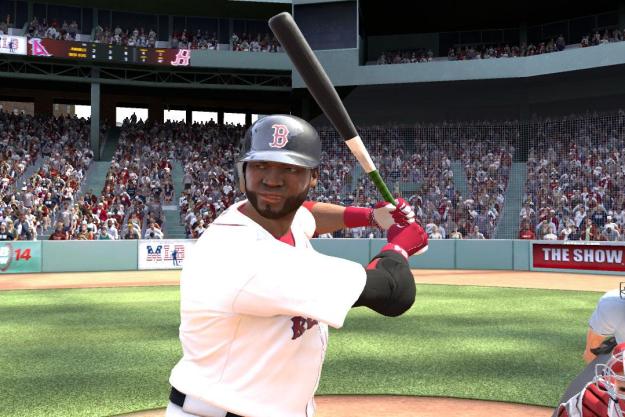 “MLB 14: The Show is a step forward for the franchise, but it’s a smaller step than we’ve come to expect.”

Sony’s MLB:  The Show is, without question, the best baseball simulation around. Of course, it’s also the only one. That may help explain why this year’s model feels a bit lethargic compared to previous versions, at least when it comes to the inclusion of new modes, but whatever the reason, the series’ bold history of never being afraid to significantly change its working formula is missing.

With that said, the series is still worthy of its crown as the top baseball sim on the market, competition or not. There aren’t as many new hooks as in the past, but there aren’t any steps backwards either. What worked in last year’s version remains, and the few changes that are introduced are all welcome additions.

The gameplay mechanics remain the same, and MLB 14: The Show can once again be customized to your skill level. The pitching mechanics previously introduced – where you have a pulsating circle and releasing at the circle’s smallest point improves accuracy – return. It can be frustrating when your timing is off, but it makes every pitch matter and feel important. Switching to Beginner and simply choosing your spot and pitch has its joys too, but it isn’t as engaging as waiting for the right timing.

Batting is also the same as last year, with an Intermediate level that requires you to choose where you will make contact with the ball and also swing at the proper time. It requires a lot of practice and shockingly fast reactions, but that’s a good thing. No two at-bats are identical.

The freedom to customize various the difficulty of multiple, individual facets of the game, even while playing, keeps the game from being bogged down in mechanics that take some practice to master. Starting on the default “Intermediate” may work for the hardcore fans, but isn’t exactly accessible to neophytes. Having multiple difficulty options opens the game up to a much wider audience while still satiating the pros.

A new feature that should also improve the game’s accessibility is Quick Counts, which starts every at-bat (on either side of the plate) already deep into the count. It cuts the length of the game in half at least, although it can be a bit annoying if you have bases loaded and start with two strikes. Still, it makes the game more accessible as a game that can last hours is trimmed down to more manageable chunk of time. Unfortunately you can’t turn this off on the fly, but an option to speed up what could be lengthy games of baseball is long overdue.

Creating your own nearly impossible scenario and proving it can be done is almost as compelling as completing someone else’s.

A good new addition comes from users themselves, via Community Challenges. Players can create scenarios of their choosing, and then share them online. Step up to the mound with bases loaded, no outs and three balls, and try to work your way out of that hole without giving up a run; or start the bottom of the ninth down by five runs. The only catch to uploading a scenario is that you need to first complete it yourself. Creating your own nearly impossible scenario and proving it can be done is almost as compelling as completing someone else’s.

These Community Challenges are actually where the game’s online functions work the best. You can now play a Franchise mode online in MLB 14: The Show, but lag is a serious and consistent problem. It is getting better, but there are few things as frustrating as preparing to hit a ball, only to have it suddenly freeze and then be in the catcher’s mitt.

One of the best additions, especially for veterans of the series, is the new Player Lock function that adds a nice twist to an old idea. If you want to play a single position throughout a game – rather than control the whole team – you can. That’s nothing new to sports titles, of course, but the twist comes in allowing you to switch back to controlling the full team or controlling a different player at any time. Each position in baseball is its own world. Playing as a centerfielder is a markedly different experience from playing as a catcher, and first base requires different skills from second. You can experience the same game in a different way on the fly. In a season with as many as 160 games, variety is the spice of life.

The Road to the Show remains the game’s crown jewel, but the changes to it this year are minor. As before, you engage in short bursts of baseball with just a handful of at-bats and moments of fielding (or longer, but less frequent games as a pitcher) that earn you experience, which in turn improves your skills in a RPG-like fashion . This year’s version of the RPG-like mode starts you out in a showcase for scouts, which then leads you to a draft, much like in NBA 2K’s last few iterations that have you display your skills and then wait to be drafted. It’s a minor addition, and one that you can skip if there’s a team you’d rather just assign yourself to.

The changes and additions to MLB 14: The Show are fairly minor in the grand scheme of things, and they don’t alter the series as much as SCE San Diego’s annual offerings usually do. If it wasn’t for the previous iteration of this game, MLB 14: The Show would be an exceptional sports game – and it still is, but it is competing with itself, and not distancing itself as much as you’d hope from an annual franchise. Make no mistake, the game is a step forward for the franchise, but it’s a smaller step than we’ve come to expect.

MLB The Show 21 was April’s bestselling game despite launching on Xbox Game Pass
EA acquires Super Mega Baseball studio as it doubles down on sports games
MLB The Show 21, a Sony game, will be available on Xbox Game Pass at launch
The best N64 games of all time
Deathloop on Xbox doesn’t change much, but is still great
The best Zelda games, ranked from best to worst
The Xbox Series X games with the best graphics
The best mouse for 2022: top wireless mice tested and compared
The best Intel processors for 2022
Best Nintendo Switch game deals for October 2022
Best Nintendo Switch deals and bundles for October 2022
Unannounced game Silent Hill: The Short Message rated in Korea
E3 2023 returns in June with separate business and consumer days