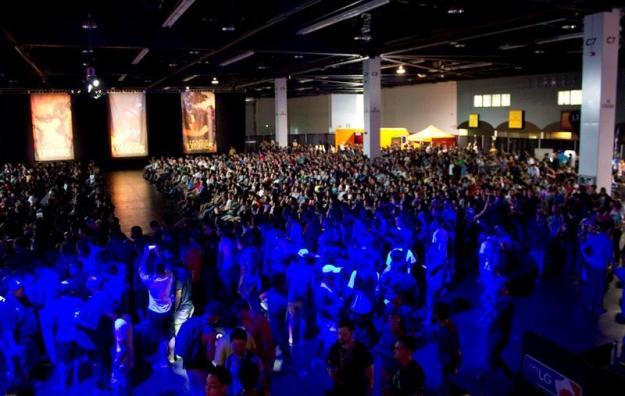 This week in sunny Anaheim, California, for 20,000  pro gamers, amateurs, and gaming fans, the happiest place on Earth isn’t the Magic Kingdom, but the Anaheim Convention Center. Just down the street from Disneyland, the Major League Gaming’s 2013 Spring Championship, one of the league’s four main annual events, is being held.

The kool-aid here has more caffeine than cyanide.

For months now, pros have been practicing to get here, amateurs have been competing for a chance to take part, all while fans followed the events leading to this since the Winter Championship in March. It’s one thing to know all this, though, but it’s quite another to see it in person. This thing is huge.

Although the event began at 5, attendees milled around for hours, discussing gaming and preparing for the opening ceremonies. By the time Marcus “djWHEAT” Graham took the stage, they had whipped themselves into a frenzy.

“Welcome!” he cried. “Now let me hear it from all the people who are veterans to MLG!” The enormous crowd erupted. “Welcome back!” Graham is an eSports celebrity in his own right, and fans revel in his presence.

A pyrotechnics-filled video with a dramatic soundtrack vaguely reminiscent of The Pirates of the Caribbean came next. The festivities were about to begin, but first Graham had some important shout-outs. He announced the name of each featured game: League of Legends, StarCraft II: Heart of the Swarm, and Call of Duty: Black Ops 2. More eruptions. (The crowd shouted loudest for LoL.) Each team received its own shout-out as well, and each was met with a chorus of hollering. They all have fans at the event, and well known teams like LoL’s TSM (Team SoloMid) raised the decibel level in the room.

The kickoff began three days of pro teams battling on the trio of main stages, all vying for over $100,000 in total prize money, while hundreds of amateurs compete for the chance to play CoD and Starcraft on the main stages on Sunday. Of all the games, League has by far the most spectators, and every double kill and impressive lane push earns roars of appreciation and battle cries from the crowd. The sound is like a Dodgers game, only indoors and more concentrated. It’s impossible to speak over the din, and commentators have to take frequent breathers. One Starcraft 2 commentator, Day9, flashes a cryptic hand signal, which half the crowd mimics. It all seems rather culty, but good-naturedly so. The kool-aid here has more caffeine than cyanide.

MLG was founded over a decade ago, and today it has 8 million registered players online playing over 40 games. A new API recently gave developers an easy way to integrate MLG into their games, and it’s not hard to see why MLG is enthusiastic about it. The league hopes to lure in at least ten more titles by the end of 2013.

The noise, the excitement of the crowd—it’s infectious.

In 2012, MLG began holding quarterly championships, and this marks the second such event in Anaheim. Last year TSM took home the gold in League of Legends, the only team game on the docket that year. This year, however, they lost their first match against a team called DIG (although TSM still has a chance to make a comeback).

The change in the Anaheim event from last year to this is significant. Hall C of the convention center is filled more or less to capacity; it’s a record attendance for MLG, and they were almost forced to stop selling passes, something that’s never happened before. It’s like a mini convention inside. Microsoft is here showing off a new zombie game for Xbox 360, State of Decay, as well as the Xbox One’s Killer Instinct. Sony Online Entertainment’s PlanetSide 2 and Warner Bros. and Turbine’s Infinite Crisis share one corner of the hall where casual players can relax and sit down with the games. Their developers are working with MLG in the hopes that their titles will one day be integrated into the competition.

The carnival like feeling is amplified by companies like Benq selling 3D monitors with a special show discount, Gunnar hosting a Super Smash Bros. tournament with a pair of “advanced computer eyewear glasses” for a prize, and Turtle Beach hawking its headsets. Old-fashioned booth babes hand out chocolate-dipped pretzels, soda, and “energy sheets” that melt on your tongue. Even anti-smoking activists from Truth are here, with a sign made of chewed gum that reads “Menthol makes the poison go down easier.”

There are three main stages for the three main games, complete with casters, soundproof booths, and enthusiastic audiences. Players come from all over the world to compete, but South Koreans dominate in StarCraft 2. It’s their national sport, after all, and as one woman puts it, “They’re all rock stars.” A stone’s throw to her right is where Avenged Sevenfold singer M. Shadows, a real-life rock star, competes in the amateur brackets with his Black Ops 2 team. It’s unclear whether she’s aware how literal her statement was.

The commentator’s chatter is always in the background. Constant analysis for those at the show, as well as those watching at home, can be heard. Millions tune in, but there’s plenty that they don’t see. Forgive the expression, but you really have to be there. The noise, the excitement of the crowd—it’s infectious. You don’t get that over a livestream.

For the first time this year some MLG stream and audio technicians are out in the open where spectators can watch them work. A few hover around, curious. “People always want to see what goes into it,” a publicist said. Others wait in line for autographs from players. Fans wearing jerseys ask a young woman to pose for a picture with them; “She’s Regi’s girlfriend!” they exclaim. “Regi” is Andy “Reginald” Dinh, a popular TSM player. They’ve been watching his progress since his first season, and right now they’re as excited as kids posing with Mickey Mouse.

The 2013 MLG Spring Championship continues until Sunday night at 9pm, when the victors receive their spoils and the starry-eyed masses will shuffle out to the parking structures and return to their day-to-days.For now, though, they get to mingle with their gaming icons – and possibly play witness to the birth of something memorable.

Frost Giant wants Stormgate to be Elden Ring for RTS games
Card Shark will get you kicked out of Las Vegas
France doesn’t want its citizens to say ‘esports’
Everything we know about Mario Strikers: Battle League
The best gaming tablets for 2022
Fortnite Chapter 3 guide: All week 1 quests and how to complete them
Cyberpunk 2077 resurges with 1 million daily players this week
Dragon Quest Treasures shows off monster-catching gameplay
All Fortnite Chapter 3, Season 4 quests
The best wireless keyboards for 2022
Best gaming laptop deals for September 2022
‘Wordle’ today, September 23: Answer, hints, and help for word of the day (#461)
Madden 23 Face of the Franchise: Tips, tricks, and best positions