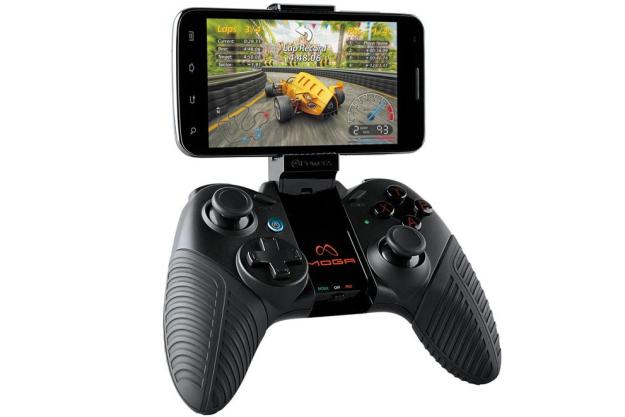 “It’s a niche product for a specific type of mobile gamer, but the MOGA Pro is the best of what’s out there for what it does.”

PowerA’s MOGA is a nifty little game controller for Android users that are content to game on the go with nubby analog controls and pint-sized face buttons. Serious gamers can appreciate the pocket-friendly peripheral as well, but for games like Grand Theft Auto: Vice City, Dead Trigger, and others that port over or emulate console play, the little MOGA doesn’t cut it.

Based on the design of PowerA’s excellent FUS1ON Tournament Controller for Xbox 360, the MOGA Pro performs exactly the same as its little brother does. The difference is that it’s wrapped in the familiar form factor of a modern day twin thumbstick controller.

Setup is a snap. Simply download the MOGA Pivot app onto your Bluetooth-enabled Android device of choice – smartphone or tablet, doesn’t matter, as long as you’re running version 2.3 or later – and fire it up. On screen directions guide you through the quick and painless process of turning on the controller and pairing it. Once that’s done, the controller works automatically with any Pivot-supported game as well as with the Pivot app itself.

Another nice upgrade in the MOGA Pro is a built-in rechargeable battery that PowerA rates at 12-15 hours. The battery certainly held up to extended use during our testing. Charging is done using an included USB cord, though you’ll need a computer to connect it to as there’s no outlet adapter.

The Pro includes an extendable plastic smartphone mount similar to the one found on the smaller MOGA. Weight distribution threatens to throw balance off with some of the larger devices, but the mounting arm extends far enough to accommodate even Samsung’s sub-tablet Galaxy Note II.

Tucked away beneath the mounting arm is a power switch with A and B settings. The former is what you set the controller to when pairing with the Pivot app, bringing full-on controller support to the 60-odd (and growing) library of games accessible in Pivot. The B setting allows the controller to work with unsupported games.

In-game performance is a welcome improvement over obtrusive virtual touchscreen controls that many of these games are saddled with. The Pivot-supported apps come with the best implementation and support, including MOGA Pro-specific control layout screens and the like. Unsupported games are unsurprisingly a bit rougher and more latency-prone, but the Pivot library offers plenty on its own.

As for the controller itself, it’s an Xbox 360 gamepad. The button placement and form factor is exactly the same as PowerA’s FUS1ON. You even get left/right analog trigger, a welcome upgrade from the digital “click” triggers of the earlier MOGA.

The question of whether or not the MOGA Pro’s $50 price is a good value depends entirely on how much Android gaming you do. MOGA Pivot supports most of the big-ticket console-style games available for the mobile OS, and PowerA promises more to come. It’s a niche product for a specific type of mobile gamer, but the MOGA Pro is the best of what’s out there for what it does.

Topics
Video-editing app LumaFusion to get a Galaxy Tab S8 launch
The best Nintendo Switch games for 2022
The best upcoming Nintendo Switch games
Warzone 2.0 DMZ tips and tricks: How to play COD’s newest game mode
The best Pokémon games, ranked from best to worst
GameStop Cyber Monday Deal: Buy 2 Get 1 on all preowned Xbox One and PS4 games
Starship Troopers: Extermination turns sci-fi satire into a co-op shooter
Score $90 off an Alienware gaming chair for Cyber Monday
How to get Battle Tokens in Warzone 2.0
How to redeem Mystery Gifts in Pokémon Scarlet and Violet
Call of Duty: Warzone 2.0 desperately needs to give players more health
Don’t miss this Xbox Series S Cyber Monday deal — ends midnight
Now’s the perfect time to stock up on PS5 controllers